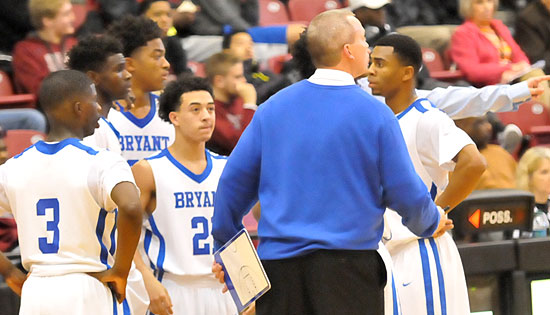 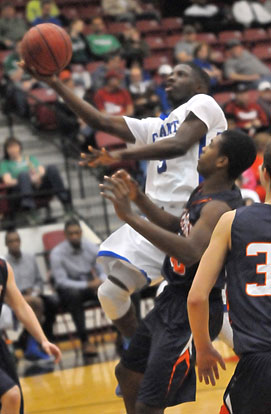 One of the things that Bryant Hornets head basketball coach Mike Abrahamson has been working with his players on much of the season is consistency. Whether up 15 or 2 or down 5, continue to play with the same effort and focus. For the most part this season, it’s been when they’ve had a lead, usually in the second half, and the kind of let up. The opponent would rally and it would make finishing with a win a whole lot tougher.

Abrahamson has wanted his Hornets to keep pushing on, keep building the lead, put the other team away.

In no uncertain terms, that’s just what they did on Thursday in the opening round of the Class 7A State Tournament against the Rogers Heritage War Eagles. The Hornets built a lead and kept adding to it on the way to the most lopsided victory, by far, of the tournament, through two days.

The Hornets improved to 21-7 on the season by dispatching the War Eagles, 58-27. The contest ended with the mercy rule going into effect with 1:14 left.

The victory moves the Hornets into the quarterfinals where they’re set to take on No. 1-ranked Fayetteville (24-3) Friday night at 8:30 p.m.

“We didn’t let up,” Abrahamson affirmed. “We always have a lull where we let them back in. And we didn’t do that this time. That’s what I think we’re capable of. Not jumping out to a 25-0 lead but just gradually building. It was probably our most complete game.”

Led by point guard Calvin Allen’s 15 points and 10 each from Romen Martin and Lowell Washington, Bryant never trailed in the game. 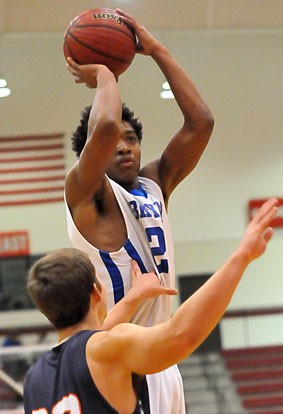 Braylon Steen lifts up above a Rogers Heritage defender for a jumper. (Photo by Kevin Nagle)

“It was kind of a gradual thing to pull away,” Abrahamson acknowledged. “I don’t feel like we ever just exploded on them. They’re a really good team. I didn’t expect them to get the six seed (from the 7A-West Conference) at the beginning of the year. I thought they’d have a higher seed. But they stumbled early. They got in though, a very dangerous team.

The Hornets beat Heritage early in the season by 15 when they kept War Eagles star Lexus Hobbs under 10 points. He had scored 23 on the Hornets in a first-round win at the 2015 State Tournament. On Thursday, Hobbs finished with 8 points, though it was a team-high. He was unable to score in the second half, going 0 for 6 from the field.

“It took a team effort,” Abrahamson said. “Early in the game, he was scoring. Our guys did a good job on him. He’s very explosive. He’s one of the toughest people that we’ve ever had to face and we’ve faced him now four times in two years. It was a collective effort. It wasn’t just one guy, which I was proud of.” 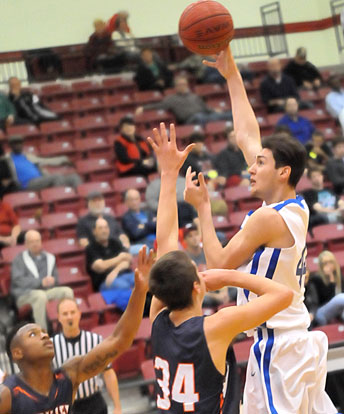 Asked about his team’s defense as a whole, limiting Heritage to just 27 points, Abrahamson said, “Just our rotations in what we’re trying to do, finishing with block-outs, not giving them second-chance opportunities. That’s been big for us all year long and we gave one of our best efforts today on the glass.”

The Hornets shot 49 percent from the field (19 of 39) including 5 of 12 from 3-point range and 15 of 17 from the charity stripe. And they played so efficiently on offense, they didn’t have a turnover until the third quarter.

Braylon Steen finished with 8 points and nine rebounds. Kevin Hunt added 7 points and the Hornets got a lift from 6-7 junior Kyle Sahr with 4. Hunt had six assists.

“I was pleased with how we moved the ball, which led to some good looks,” Abrahamson said. “Guys stepped up other than our top two scores Hunt and Martin; Steen and Allen. Lowell had a good game.”

The game was tied at 2 but when Hunt fed Steen for a layup at 5:31, the Hornets were ahead to stay. Allen hit the first of his three 3’s off a kickout from Marvin Moody and, after Hobbs hit a free throw, Washington scored off the glass to make it 9-3. A Heritage turnover led to a timeout. 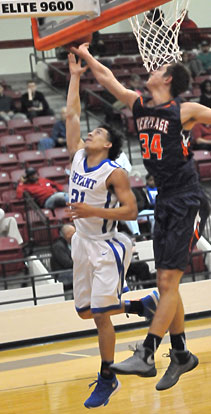 The War Eagles cut it to 9-7 before Allen snuck inside for a stickback that made it a 4-point game going into the second stanza.

Martin opened the new period with a 3 then Allen made a steal and Martin fed Washington for a layup to make it 16-7.

Marcus Breedlove interrupted for Heritage with a fall-away jumper but Martin fed Sahr for a bucket in response then made an impressive drive to the rack for a layup to make it 24-12.

The War Eagles cut it to 8 but, with 1:08 left in the half, Allen knocked down another triple to make it an 11-point lead at intermission.

In the third quarter, Heritage was unable to score until just 3:12 remained. A drive by Hunt, a three-point play by Washington, a free throw from Hunt and one more 3 from Allen had the Hornets up 36-16 by the time the War Eagles’ Seth Stanley found the range.

That proved to be the only basket of the quarter for Heritage as Bryant pushed the lead to 21. Martin hit a buzzer-beating 3 to cap the quarter.

The War Eagles were unable to cut the margin below 18 in the fourth quarter as the Hornets converted all four of their field goals down the stretch and went 11 of 12 at the free-throw line with five different players contributing from the stripe.

Asked to look ahead to Fayetteville, Abrahamson said, “Obviously, the number one team in 7A all year. It’s going to be a challenge. They don’t beat themselves. We’re going to have to play. We’re going to have to beat them. We’re not going to just fall into this one, for sure. We’ve got to give a great defensive effort again. We’ve got to score the ball, hit some shots. I know that sounds cliché but that’s basketball.”