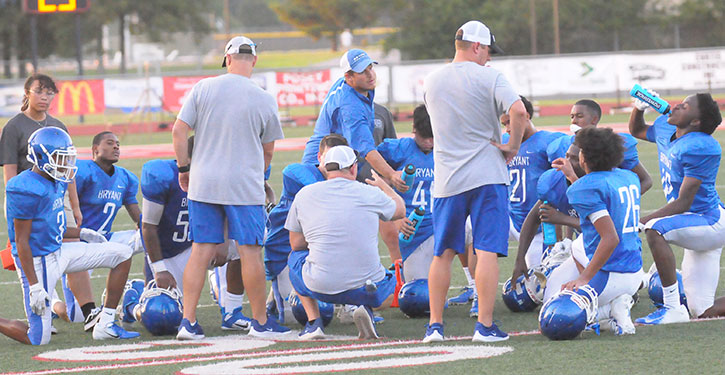 Hornets, Tigers freshmen battle it out in scrimmage

RUSSELLVILLE — The Bryant Hornets freshman team’s defense forced three turnovers and held the Bentonville Tigers freshman team to just 32 yards rushing in a half as the two teams squared off in a preseason scrimmage at Cyclone Stadium at Russellville High School on Monday night.

Ethan Primus had two interceptions including one in the final moments of the scrimmage to secure the Hornets’ 7-0 lead.

Martavian Earle, who rushed seven times for 107 yards, scored the lone touchdown from 2 yards out after he set up the play with a 44-yard gallop.

Including four carries in the first half in which the teams traded 10-play possession, including playing time for second and third string teams, Earle picked up 148 yards on the ground.

“I was really pleased defensively,” said Bryant head coach Kenny Horn. “We flew to the football, attacked, were in the right place, executed, got turnovers. There’s a few things up front we can probably fix but, man, I was really proud defensively. I thought we played well.

“Offensively, we just didn’t finish our execution,” he continued. “We were slow. We’ve got to catch. Sometimes you’ve got to throw. Tonight, we threw well. We just didn’t catch well.”

The Hornets threw nine times in the half but only connected on one pass. The receivers had several drops.

“I thought we ran the ball pretty good,” Horn continued. “It still could’ve been better. We probably could’ve scored a few more times if we’d blocked a little bit better or for a little bit longer.

“For the most part, I thought we did okay,” he added. “I was pleased.”

Bryant was probably playing a team that’s as good as any they’ll face this season. Bentonville ran the ball effectively and completed some passes but struggled with bad snaps, fumbles and penalties.

Horn was looking forward to seeing the video and figured there will be points of emphasis derived from viewing it to emphasize during practice in preparation of their season opener on Thursday, Aug. 29, against Pine Bluff.

“Finishing, execution, technique, footwork,” he acknowledged. “Our footwork just wasn’t really good. It was not bad, but we can clean that up. As far as the operation of everything, we were clean, held onto the ball, were on the ball, didn’t jump offsides, no motion penalties. I thought we did good there.”

At the start of the game-conditions second half, Bentonville made a bid to score, driving from their own 27 to the Bryant 17. The march was keyed by a 33-yard pass play and a 23-yard run. On first-down at the 17, Bryant’s Kade Stewart tackled the Tigers’ quarterback for a 3-yard loss. On the next play, Primus made his first interception at the 4, returning to the 21.

Bryant responded with a solid drive. Quarterback Cory Nichols converted a fourth down with an 8-yard keeper to the 36.

Moments later, it was fourth-and-5 at the 41 and Earle broke a 42-yard gallop to the 17. Nichols’ shovel pass to Chris Gannaway picked up 2 yards and the Hornets eventually faced a fourth-and-5 at the 12. Nichols’ pass over the middle ricocheted off a receiver and into the arms of a Bentonville linebacker who was tackled at the 6.

The Bryant defense held the Tigers without a first down, and they were forced to punt. Malachi Graham made a fair catch at the Bentonville 46. After Earle’s 44-yard burst, he scored with 7:32 left in the scrimmage. Gunnar Givens added the extra point.

From their own 20, the Tigers were moving again. They got to the Bryant 43 when a false start penalty moved them back. Linebacker John Ede made a stop for a loss of 6 and, after a penalty against the Hornets, Ede pounced on the Tigers’ quarterback who had fumbled the shotgun snap, resulting in an 8-yard loss.

The Hornets made a bid to score again but a deep pass to an open receiver down the right sideline was dropped and, on fourth-and-5 at their own 27, Nichols was stopped for a loss.

Bentonville took over at the Bryant 25 with a chance to tie the game in the closing moments. But, after a swing pass, picked up 4 to the 21, Primus made his second interception and the Hornets took over with :55 left.

A 9-yard keeper by Nichols and an 11-yard burst by Earle ran out the clock.