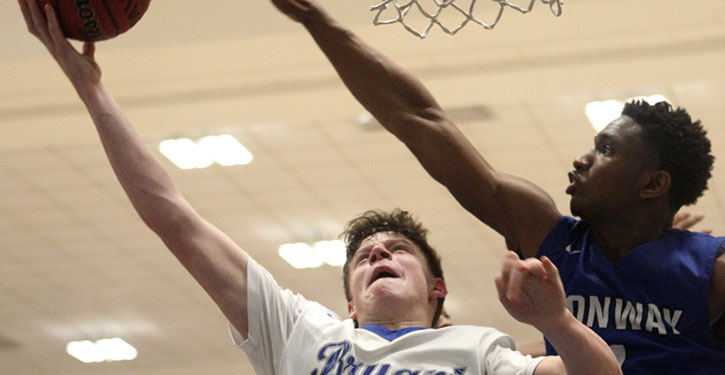 When the season began, Bryant Hornets head coach Mike Abrahamson said that, sooner or later, his team — starting a freshman point guard, a sophomore guard, a junior swingman and two senior forwards that hadn’t played extensively with a bench of very green sophomores and a senior that hadn’t played — would be a tough out.

And it didn’t take long for that to happen as they went to Bentonville and won the Crabtree Invitational Tournament including a win over a very good Tigers team in the finals. They played well in the rugged Jammin’ For Jackets, split two games in a classic in Conway including a nail-biter-against eventual 7A-West champion Fayetteville that got away late, then made it to the finals of the holiday tournament at Fort Smith.

They were a tough out in conference play too, but they stumbled a couple of times along the way and ended the regular season on a three-game skid after clinching a spot in State with a six-game winning streak.

So, now it’s time for the 7A State Tournament in North Little Rock. The Hornets, as the fourth seeded team from the Central Conference will play the West’s five seed, Springdale at 2:30 p.m., today.

“After the last three games, I feel like maybe we were tougher early on than I thought we would be,” said Hornets coach Mike Abrahamson. “And I still think we’re tough but now I think everyone’s tough. I still think we’re going to be a tough out but now everyone’s playing their best basketball. When you look at that (State) bracket, there’s not a soft spot in that bracket, at all. It’s 12 really good teams that are dangerous.”

Including Springdale, he asserted, “They’re really good. They started off 0-4 in their conference then went 7-3 in the last 10 and they’re playing as good as anybody in their conference. They’ve got some athletic, quick guards that get to the basket really well and they shoot it as well. They’ve got a 6-6 post player, a three-year starter, a senior this year. He jumps well, moves well and finishes well around the basket. They just throw it up to him and he catches it and puts it off the backboard. He can jump over everybody and catch it, comes down and gathers himself and scores. He uses hit body well, has good body control. We’ve got our work cut out for us. They’re tough.”

But the coach said the team’s practices have been less about the Bulldogs than about the Hornets.

“We need to be better defensively,” he asserted. “I think if you look at our team, we’re playing hard but, I think, when you look at the details of what we’re doing, we can do some things better; containing the drive, closing out a little bit better, anticipating where we need to go next in our defense, finishing plays with contested shots and blocking out and getting that rebound.

“On offense, you know we’re getting really good looks but sometimes we’re getting them really quickly,” the coach continued. “That’s good when you’re making them. And we do make some. We have games where we score a lot.

“But what I’m finding still is that we’re not spending much time on offense, we’re spending time on defense and that’s not probably a good thing for us. We want to work the defense a little bit more, maybe look for layups early in our half-court offense then, after we’ve worked them a little bit, if we don’t have a layup, we can take some of the shots we’ve been getting in what seems like three seconds — and they’re good looks but it’s maybe not, over the course of four quarters, good strategy sometimes.

“It’s nothing really new,” he asserted. “We’re just trying to get better.”

During the season, all five Bryant starters have proven they can score in double figures whether it’s the freshman point guard Camren Hunter or super sophomore Khalen Robinson, seniors Deron Canada and Sam Chumley or junior Rodney Lambert.

The help off the bench has improved too. Abrahamson has gotten quality minutes from three in particular, forward Ethan Hilkert, guard K.J. Merriweather, and post Catrell Wallace.