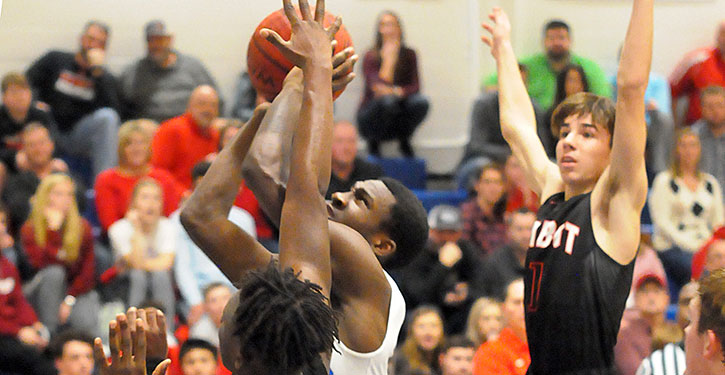 The Bryant Hornets are now tied atop the 6A-Central Conference standings with their next two opponents. The Hornets, who’ll visit North Little Rock on Tuesday and host Conway on Friday, are 4-1 in league play after a 65-55 victory over the Cabot Panthers on Friday night at the Hornets’ Nest.

Conway, which had been maintaining the lone remaining unbeaten conference record, suffered a 65-54 loss to Little Rock Central Friday night allowing the Hornets and North Little Rock, with a 66-58 win over Fort Smith Northside to pull even.

Bryant improved to 12-4 overall this season, winning its fourth straight and 10thin their last 11 games.

“We’ve played well the last two weeks, really the last month,” acknowledged Bryant head coach Mike Abrahamson. “The worst part is, you’ve got to go back, and you’ve got to play all these teams again. And, it’s like, ‘Oh my gosh, how are we going to do it again?’

On Friday, the Hornets withstood a 3-point barrage from Cabot. The Panthers hit 10 3’s but went 0 for 6 in the fourth quarter. Jackson Muse connected n four triples on six attempts on his way to a team-high 14 points but was shut out completely in the fourth quarter before fouling out of the game.

The Hornets spread the floor and led Khalen Robinson, Trelon Payne and Rodney Lambert eat clock. Robinson hit four free throws and had a layup while Lambert added a pair of free throws to clinch the win with :23.4 showing.

Robinson scored 17 points for the Hornets including 9 of 12 at the free-throw line. Lambert, coming off a 33-point night on Tuesday at Fort Smith Southside, added 12. But Payne led all scorers with 23 including 18 in the first half.

“Good start, good finish,” Abrahamson said. “In the middle? It was a battle. Well, it was a battle the whole time but, in the middle, it was two good teams making plays. Cabot’s offense was really good tonight. They’re hard to guard. Credit to them. That’s the most points we’ve given up in a month.”

Actually, the Hornets have surrendered more than 50 points in a game just six times, but this was the first since Dec. 14 when they buried Rogers Heritage, 74-52. Even the lone loss during the last 11 games was by 47-42 against Northside.

“We knew, we had a good grasp on what they wanted to do,” Abrahamson said of the Panthers. “They were just really good at it. It starts with them, but we’ve got to guard the ball better and we have to help when they kick it to their shooters. They shot the ball so well. We talked about it all week, every timeout, they just continued to hit shots. At some point, you just say, credit to them.”

But while Muse, guard Seth Vance and forward Braydon Roberts combined for nine of those Cabot 3’s over the first three quarters, the Hornets were stopping up the inside where the Panthers’ leading scorer on the season, Jacob Hudson, was stymied. Through three periods, he had just 4 points and four rebounds.

He helped take up the slack when the Hornets shutdown the 3-point shooting in the final stanza, scoring 9 points on his way to 13.

“A lot of effort and a lot of correct positioning, defensively,” said Abrahamson when asked how the Hornets limited Hudson for so long. “He’s a tough match, plays inside and out, drives so hard, posts so well. He’s athletic. He’s tough.”

Regarding Cabot’s 3-point shooting, the coach said, “I think our guys were so focused on jumping to the ball and taking space away, they didn’t have their head on a swivel. They were locking in on the ball while their man was cutting or coming off screens or a stagger or an elevator or a double screen. That was a problem a few times, just locking in on the ball.

“Treylon did a good job on him there at the end to take him out of rhythm,” he related.

Muse helped the Panthers build an 8-2 lead early. Payne got started with a pull-up floater off a drive. In a flurry, Lambert made a steal and drove for a layup, Payne swiped the ball and fed Lambert for an easy deuce and the game was tied at 8.

Rudolph canned a 3 with 2:21 left in the first period. That would prove to be Cabot’s final lead, 11-8. Payne nailed a triple to tie it and, off Catrell Wallace’s block, Payne came down and buried another troka, giving the Hornets a 14-11 lead going into the second stanza.

And Payne opened the second period with his third 3. Rudolph drove for a basket but Khalen Robinson knocked down his first pair of free throws to make it 19-13.

Hudson got loose down the right side of the lane and slammed a dunk, moving Abrahamson to call a timeout with his team’s lead at 19-15.

Padrick Martin hit a free throw for Bryant and, off a Vance miss, Payne drove for a basket and a 22-15 lead as the Hornets turned the momentum back around.

Still, the Panthers trimmed the margin to 24-21 but Robinson popped a baseline jumper and, off a Cabot turnover, Lambert was fouled. Though he missed both shots, Wallace rebounded and scored.

Bryant was energized to start the second half. Wallace made a steal and scored then Camren Hunter made a steal that he cashed in off the offensive boards. Moments later, Hunter dished to Robinson for a jumper in the lane and a 39-24 lead, the largest of the game with 6:55 still to play in the third quarter.

“We like to share the ball,” Abrahamson said. “We don’t want to be a one-man team. These guys are really coming together as a team and they like to see each other have success. That’s a good thing for us to see.

“Not that they didn’t used to but they’re enjoying it more,” he continued. “You can see that they’re genuinely happy when a teammate scores or has a good game or makes a good play. They’ve always been that way but there’s more of it now.”

Behind 3’s from Muse and Vance, the Panthers stayed engaged. They’d cut it to 39-32 when Lambert was fouled on a follow bucket. He missed the free throw, but Wallace rebounded for the Hornets and got the ball back outside to Lambert who drained a 3.

The teams traded baskets for a while then Martin got behind the defense and soared in for a dunk that brought the house down. But a 3 by Rudolph beat the buzzer and Bryant’s lead was 52-43 going into the final period.

Hudson and Payne traded free throws then Hudson scored off the offensive boards. But the Hornets maintained the advantage until, with 2:47 left, Vance hit a pair of free throws that had the lead down to 57-53.

They would never be that close again as the Hornets closed out the win.