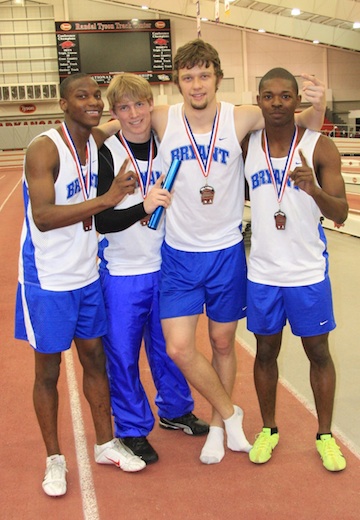 FAYETTEVILLE — The Bryant Hornets earned their highest ever placing at the 5A-7A State Indoor Track Championships Saturday at the Tyson Track Center on the University of Arkansas campus. The Hornets scored 45 points to place fourth, only one point behind third-place Bentonville, and only four points behind runner-up Fort Smith Southside. Fayetteville won the team championship with a total of 86 points. Over 40 teams were represented at the meet, with 24 teams scoring.

The Hornets’ lone first place finish came in the final event of the meet in the 1600-meter relay. The quartet of Tyler Freshour, James Glasper, Kendrick Farr, and Stanley Oxner earned the state championship win with a time of 3:32.98. As they did two weeks ago at the ATCA Indoor Classic, the Hornets had to come from behind to earn the victory. Oxner took the lead in the last few meters to secure the victory in the fourth of five heats, then the Hornets had to wait and hope that no teams in the fifth heat ran faster than their time. When Cabot crossed the line first in the fifth heat in 3:33, the Hornet victory was secured.[more] 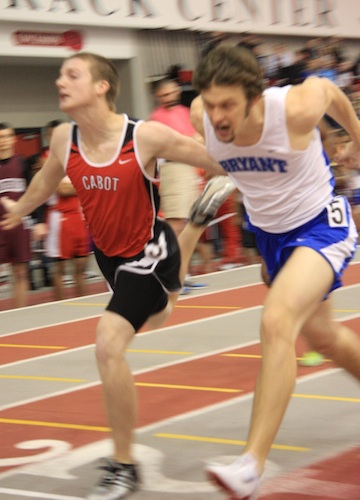 “The 1600 meter relay victory was a nice way to end the meet,” stated Hornets coach Steve Oury. “All four guys ran extremely well. Freshour led off nicely, and then Glasper and Farr both ran 53 seconds for their legs. Farr’s time was a big personal record. They really wanted the win and now they can say they are state champions.”

“Placing fourth is bittersweet,” Oury said. “While I am extremely proud of how we competed, it is tough to see how close we came to possibly earning a runner-up trophy. The guys really ran well today. Stanley Oxner and Tanner Tolbert both did great jobs, as did all the guys who scored.

“We also had lots of performances that just missed scoring,” he noted. “Dillion Winfrey and Sammill Watson both came agonizingly close to scoring in the sprint events, as did Luke Lindsley in the 3200 meter run. Luke set a huge personal record with a time of 10:05, which most years would score nicely, but this year it earned ninth. That’s just the way it goes sometimes.

“This meet should give us some confidence heading in to the outdoor season,” Oury added. “Things change in outdoors, so we will have to keep working to improve and hopefully we can challenge at the outdoor conference and state meets.”

The Hornets are scheduled to open the outdoor season with their own Hornet Relays on Thursday, March 18.