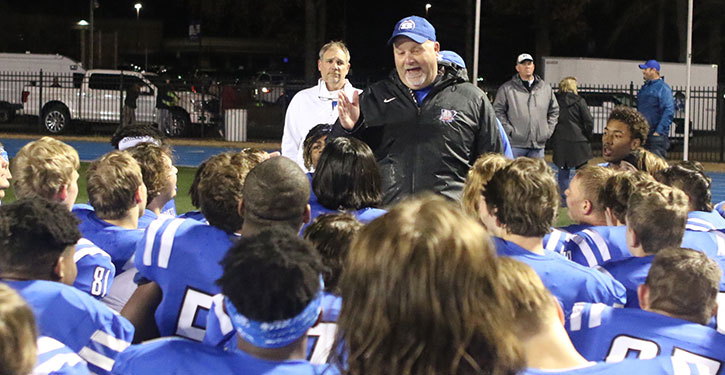 To say that the Bryant Hornets and the North Little Rock Charging Wildcats know how to win would be stating the obvious. After all, the Wildcats will be playing in their fourth consecutive 7A State finals tonight while the Hornets will be going after their second consecutive State title. The Hornets made it to the semifinals, a win away for the title game in the previous two campaigns, denied by the Cats themselves in 2016.

They are here, in large part, because they are probably the two toughest, most physical teams in the state.

“I think so,” agreed Hornets head coach Buck James. “I think they pride themselves in it. I think that’s what they want to be known as. It’s kind of the Chicago Bears, Green Bay Packers type thing; you know, the monsters of the midway type mentality.

“But we can match that,” he asserted. “That’s a mentality. That’s all it is. We’ve tried to impose our mentality on every team we’ve played this year. I have to give them kudos. They whipped us on the line of scrimmage last time. If they do it again, it’s on us.”

The Hornets still won the regular-season match-up 35-21 after the game was tied at 21 in the third quarter. It was just one of two games all season in which Bryant did not force the Sportsmanship Rule (mercy rule) to be put into effect. In 10 others, the clock was running non-stop (in accordance to the mercy rule) at the end.

Bryant has out-scored their opponents 539-107. And that 107 is a bit deceiving because 14 of those points came on interception returns for touchdowns (with the Hornets’ D not involved) and another 35 points coming after the mercy-rule was in effect.

That means that, in 12 games, the Hornets’ first-team defense has allowed just 58 points, less that 5 per game.

If you go by numbers, the Hornets average 45 points a game while North Little Rock averages 32 per game. So, theoretically, if both teams have an average offensive output, Bryant wins 45-32. If both teams match their best scoring output of the season, Bryant wins 56-42.

But they don’t play these games on paper.

“It’s hard to do anything and repeat at it, especially in sports,” James said. “With everybody geared up for you and everybody giving you their best shot, it’s always a difficult task. It takes a lot of preparation, a lot of hard work then you have to have some luck. But I feel like our team is as ready for it as any team I’ve ever coached.”

And this is the seventh time James has coached a team in the State finals.

“Winning requires payment in advance” says a sign in the Bryant Fieldhouse.

“It’s just the fact that we’re playing a group of guys that are very good at what they do,” he said of North Little Rock. “They’re very athletic and they’re tenacious. We have to have our A game and we have to have some luck on top of that. I think that’s anytime you play a team that’s very athletic, very motivated and has great athletes.”

It is the seventh time in the last four years that the two 7A-Central Conference rivals have clashed.

“We’ve won the last two, but we lost the first four,” James noted. “I told them on the radio this week, I don’t consider it a rivalry until we sort of even up the score a little bit.

“They have a tremendous program,” he continued. “(NLR head coach) Jamie Mitchell has done one heck of a job. We’ve really got to play at a high level against a team that expects to be there no matter what happened in the regular season. All the miscues and injuries and things that went wrong for them at the beginning of the year then they turned it into this type of season, speaks volumes for their coaching staff and their kids.”

The Charging Wildcats are 8-4 on the season. They’ve won three in a row since their loss at Bryant on Nov. 1.

In that game, North Little Rock’s tailback Brandon Thomas, who has rushed for 1,300 yards despite missing some of the season due to injury, had two long touchdown runs aganst the Hornets. He finished with 178 yards but 117 of that came on those two runs.

Slowing down Thomas will be a challenge again, said James of the three-year starter.

“The biggest thing is we’ve got to line up right,” the coach said. “I think that’s what hurt us last time on the two big runs. We just misaligned and they had the right play called for the right situation and it happened twice. We’ve got to be able to eliminate that. What happens if that happens five or six times? That’s a big point of concern.”

One of the keys to their win in the 2018 finals was the way the Hornets shutdown the Wildcats’ ground game.

“We’ve got to tackle,” James insisted. “We’ve got to be able to tackle a tank, a moving stump. That guy (Thomas) is an incredible athlete. I mean you can write a letter to the team right now and say, hey, this guy’s going to get the ball 25 or 30 times, you better stop him. That’s sort of the way it’s been the last six weeks with him.

“We’ve got to do a great job of knowing where he’s lined up, knowing what he’s going to do and then not letting them use him as a decoy to fall asleep and try to hit you over the top because now they’re trying to throw the football a lot more,” James mentioned. “That makes them tough when they start making the field 50 yards deep and 50 yards wide along with that great running back.”

On the other hand, the Wildcats’ shackled the Hornets’ running game, holding them to a net of 56 yards rushing. Bryant quarterback Austin Ledbetter, however, completed 19 of 37 passes for 326 yards and five touchdowns.

As Hornets’ senior guard Tanner Wilson put it earlier in the week, most of the team’s offensive line hadn’t faced North Little Rock before that Nov. 1 game.

“We had one guy (on the offensive line) who had even played against those guys before,” James agreed. “You don’t know the monster until you have to go out there and tackle the monster. They found out what it’s about. That’s why we call it experience.

“I think we’ve got to go out there and do some things we didn’t do last time that we’ve been able to do all year long,” he added. “Yeah, they’re tough; yeah, they’re strong; yeah, they’re athletic and they’re tenacious but we can be too. It’s a mindset.”

“It’s in color. It will last forever. It will be on the internet ‘til their kids’ kids watch it. It ain’t like it was when we won in 1981, when I was playing. You can’t find a clip of nothing. These guys have got to understand that this is forever. This is real. This is real-life athletics, real-life sports, playing for a real-life championship.”