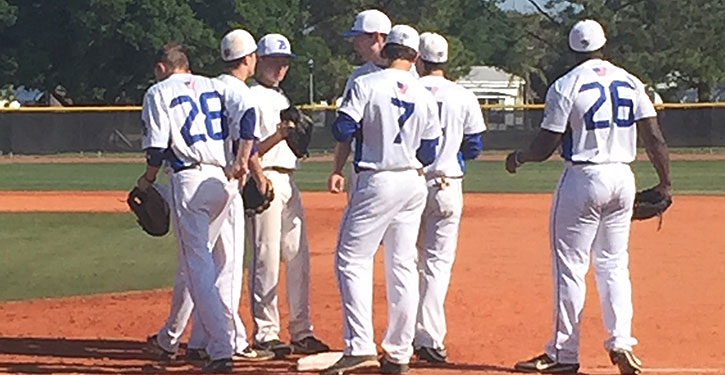 TAMPA, Fla. — The Bryant Hornets improved to 4-0 on their annual trip to Florida by forging two more wins on Tuesday, starting with a 6-2 victory over the Minnehaha Academy Redhawks of Minneapolis, Minn., early. Late in the afternoon, they pounded the Faith Baptist Christian Academy Crusaders of Ludowici, Ga., 12-1.

The Hornets improved to 9-4 overall this season including six wins in a row and seven in the last eight games. They’re set to enjoy the Tampa area on Wednesday before returning to action on Thursday against the Plum Mustangs of Pittsburgh, Pa. Though other games may be added, the Hornets are scheduled to play Friday against the South Fayette Lions of McDonald, Pa., before heading home.

The Redhawks struck for two runs in the top of the first but then got shutout the rest of the way by starter Coby Greiner with relief help from Scott Schmidt in the final two frames.

Greiner walked two and struck out four in five innings.

The lead didn’t last long as the Hornets scored three in the bottom of the inning then tacked on three more in the home fifth.

Minnehaha started the game with a double and a single. A fielder’s choice got the first run home then Greiner struck out the clean-up batter. A walk extended the inning, however, then an error made it 2-0 before the Bryant right-hander induced a grounder to Schmidt at second for a game-ending force.

In the bottom of the frame, Jake Wright led off with a walk and Seth Tucker got a bunt down for a base hit. Cameron Coleman walked and the bases were loaded. Logan Chambers was called out on the infield-fly rule but Logan Grant, running for Wright, was able to scramble home. Greiner picked up an RBI by squeezing in a run then Schmidt singled to make it 3-2.

A one-out walk in the top of the second was erased when the Hornets went around the horn on a doubleplay, started by third baseman Konnor Clontz. Greiner worked around a pair of errors in the third, fanning two. In the fourth, a lead-off single was erased by another Bryant twin-killing. A couple of singles followed but the trail runner was picked off to end the threat.

Meanwhile, the Hornets were shut down as well. Beaux Bonvillain managed a two-out single in the fourth but was stranded.

In the fifth, an infield hit with two down came to naught for the Redhawks.

Bryant’s uprising in the bottom of the inning began with an error that allowed Matthew Sandidge to reach base. Wright reached on an error then Tucker sacrificed the runners to second and third. With two down, Sandidge scored on a passed ball as Chambers walked. Greiner’s grounder to short was botched resulting in a run and Schmidt singled to plate Chambers.

Schmidt took the mound and was greeted by a single to right and an error. But he retired the next three on flyballs to the outfield to keep it 6-2.

In the seventh, he set the Redhawks down in order, finishing with his lone strikeout.

The Hornets built a 6-0 lead, gave up a run in the bottom of the fourth then blew the game up with six in the top of the sixth, finishing with a run-rule win over the Crusaders.

Right-hander Will McEntire scattered four hits in the game. He walked one and struck out five.

The Hornets pounded out 15 hits including three each by Tucker and Sandidge. Wright, Coleman and Myers Buck added two apiece. Sandidge and Greiner each drove in three.

In the top of the first, there were two down when Coleman singled to center. Chambers slapped a single to left then Greiner shot a single to right to plate the first run. Schmidt beat out an infield hit to load the bases but Faith Baptist got out of the jam with no further damage.

In the second, Buck singled, took second on an error and scored when Sandidge lined a double to left. Sandidge stole third but was thrown out trying to score on Wright’s bunt. With Grant in to run for Wright, Tucker beat out an infield hit then took third on Coleman’s grounder to the right side. A passed ball allowed Grant to score and Tucker to take third. Chambers walked then another passed ball made it 4-0.

Meanwhile, McEntire retired nine of the first 10 he faced through three innings. He fanned two and pitched around a two-out single in the second.

In the top of the third, Buck worked a two-out walk, Sandidge singled and Wright yanked a base hit to left to tack on a run.

Bryant’s fourth began with Coleman drilling a double to left. Chambers sacrificed him to third then Greiner picked up an RBI with a grounder to first.

Faith Baptist managed its lone run in the bottom of the fourth on a lead-off single, a force out, a walk and another single. McEntire struck out the next batter then hit one to load the bags. A pickoff play got the runner at first and the threat was over.

To close out the win, McEntire retired six of the last seven. The only base-runner was a one-out single in the home sixth.

By then, the Hornets had erupted for six more runs. Tucker led off the top of the sixth with a double and advanced to third on a balk before Coleman walked. Chambers got a bunt down but the Crusaders got the out at the plate.

Coleman swiped third, however, and scored on Greiner’s sacrifice fly. Schmidt reached on an error as Chambers advanced to third. A walk to Bonvillain loaded the bases and a free pass to Buck forced in a run.

That brought up Sandidge, who drilled a double to center, driving in Schmidt and Bonvillain. Wright’s double plated two more to finish the onslaught.