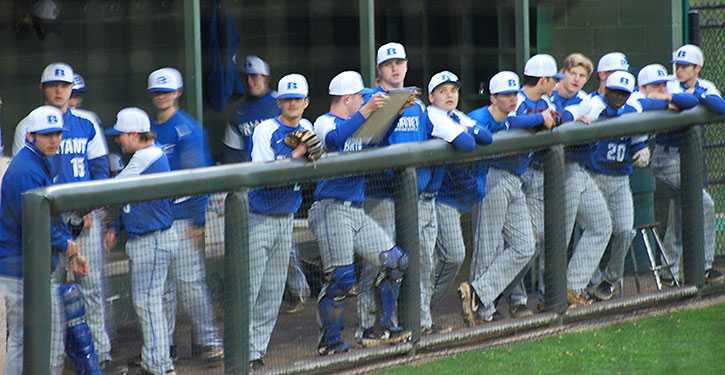 WAXAHACHIE, Texas — This time of year, baseball teams look for ways to find warmer weather to play in, so they go south. The Bryant Hornets make an annual trip to Texas with that in mind, plus the opportunity to play a lot of games in a short amount of time — five in three days.

Sometimes, however — and it’s the case this year — the weather’s no better than at home.

But the Hornets got in their first two games on Thursday despite temperatures in the 30’s, earning a 4-2 win over Sherman, Texas and a 6-0 victory over the host team.

Bryant improved to 4-0 on the young season going into games today against a solid program in Midlothian, Texas, and a strong team with Division I recruits from Legacy High School in Mansfield, Texas.

Saturday, the Hornets take on Birdville, Texas at 11 a.m., before returning home.

Thursday’s games were highlighted by right-hander. The sophomore went five innings without allowing a knock, fanned 10 and walked one.

A lead-off single in the bottom of the sixth spoiled the no-no. Coby Greiner relieved and finished the inning.

At that point, the Hornets led 4-0. In the top of the seventh, Logan Chambers burned the centerfielder for a double. Drennan did the same thing to drive in the run. With one out, Jake Wright singled in Drennan and the game was called due to the time limit.

“Waxahachie has a very solid program,” stated Hornets coach Travis Queck. “Austin was phenomenal. He did exactly what we need to do. He threw 68 pitches and 50 of them were strikes. He was very efficient, was able to pitch backwards, and rarely got behind in counts. I think there was one hitter he went four straight balls but, otherwise, he kept getting better as the game went on, even after getting hit on the elbow of his throwing arm by a pitch.

“He was good,” the coach added. “We made adjustments throughout the game. We were able to execute a hit-and-run, steal some bases and put ourselves in some good situations to tack on runs.”

Bryant grabbed a 2-0 lead in the top of the first. Drennan reached on an error with one out and Ledbetter walked. Wright grounded out to move the runners up then Logan Grant came through with a single to left, bringing them both home.

Ledbetter pitched around a two-out error in the home half and a two-out walk in the second. He then set down 10 in a row before the lone single.

The Hornets tacked on a run in the top of the fifth when Greiner beat out an infield hit, Chambers sacrificed him to second and Drennan doubled him home.

In the sixth, Grant worked a one-out walk, stole second and took third on a wild pitch. Another wild delivery as Gage Stark was drawing a walk allowed Greiner to score, making it 4-0.

In the win over Sherman, the Hornets managed just two hits but waited out seven walks. Both hits were doubles, one by Drennan and another by Noah Davis.

Braden Knight and Slade Renfrow combined to limit Sherman to two hits. Both runs were unearned.

“It was a very slow-paced game,” Queck acknowledged. “We only got four innings in over an hour and 45 minutes. Sherman was very, very deliberate.

“Every run that they got, we gave to them,” he said, “free passes, an error and a hit-by-pitch.”

Davis’ double drove in two runs in the top of the first. Drennan’s double started the uprising then Ledbetter reached on an error and Wright drew a walk. Davis’ knock came on a 1-2 pitch with two down.

In the top of the second, Greiner drew a one-out walk then so did Chambers. Greiner tagged and went to third on Drennan’s fly to right. A walk to Ledbetter loaded the bags then a walk to Wright force in a run. Another to Grant made it 4-0.

In the home second, a pair of errors opened the door for Sherman’s runs. A hit batsman loaded the bases then a single drove in a run and another hit batsman made it 4-2.

Knight came back to keep it there, forcing Sherman to leave the bases full. He fanned a batter then got the second out on a grounder to Logan Catton at third. He threw home for a force. The final out came on a fly to Greiner in center.

In the third, Sherman’s second hit came with one out. Knight fanned the next batter but a four-pitch walk followed and Queck brought in Renfrow who hit the first batter he faced to fill the sacks but induced a grounder to Davis at second to end the threat.

Renfrow retired the side in order in the bottom of the fourth as the game concluded.