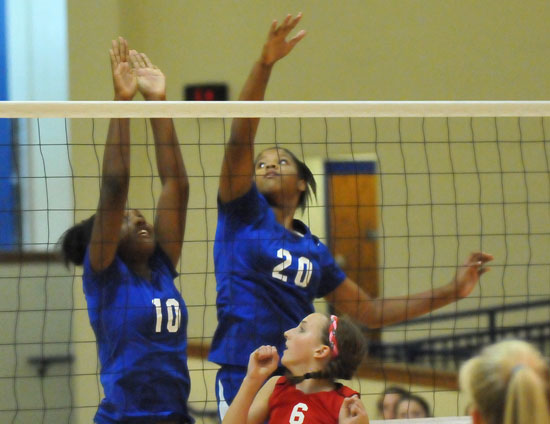 When a server gets on a roll, it often takes some extra determination, a break of some sort or both to disrupt things and force a sideout. 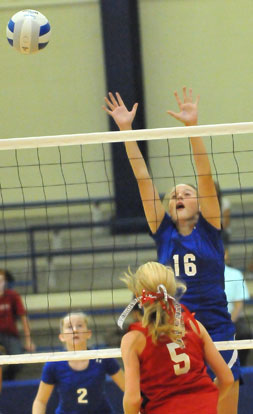 Bryant White’s Gabbie Bonvillain (16) makes a play at the net while teammate Maddie Miller (2) backs her up. (Photo by Kevin Nagle)

On Monday, the determination was there but the Bryant White Lady Hornets eighth grade team of Bryant Middle School couldn’t get a break as the Cabot North Lady Panthers eighth grade team went on a run in the second game of their match to close out a 2-0 win.

The Lady Hornets absorbed a 20-25, 5-25 setback going into tonight’s visit to the Anthony School.

“Raven Loveless and Jadyn Nichols both had a good night at the net. They had several blocks and Raven had three kills,” she noted. “Kyla Baker was 9 for 9 on her serves.

“The second game, we let one girl beat us,” the coach continued. “We just couldn’t break her serve. After so many points, it gets in your head and we just couldn’t do anything about it.

“I hope we can get some confidence back tonight,” Ward concluded. 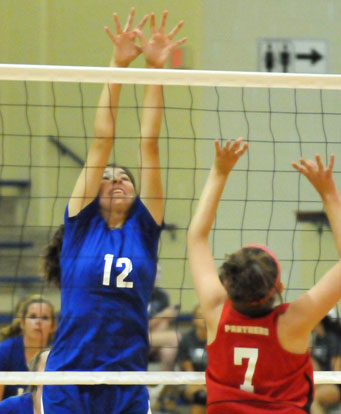 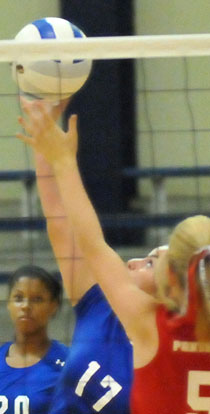 Kyle Baker (17) works to get a hit over a Cabot North player. (Photo by Kevin Nagle)