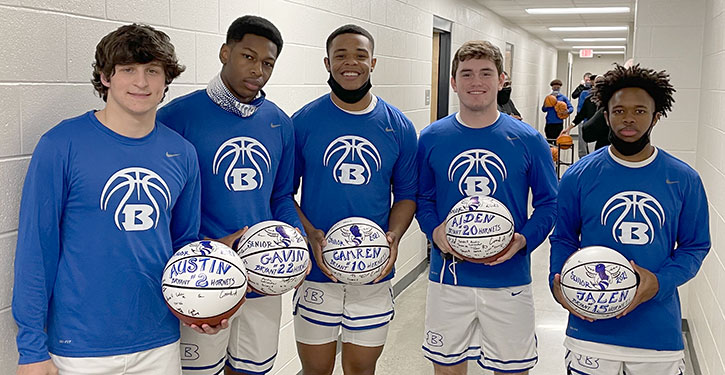 Senior Camren Hunter scored 26 points on Friday night against the El Dorado Wildcats to reach the 1,000-point mark in his career for the Bryant Hornets.

Though statistical records for the Bryant program are hard to come by, Hunter and former Hornet Romen Martin may be the only two members of the 1,000-point club.

After scoring 20 in Bryant’s 63-48 win over Benton on Tuesday, Hunter was exactly 50 points away from the achievement. He scored 29 at Jacksonville on Thursday then broke the barrier with a 12-foot jump shot midway through the fourth quarter on Friday.

“He’s just a tough matchup for anybody,” said Hornets head coach Mike Abrahamson. “We can play him down low. We can play him in the mid-post, high post. We can play him on the perimeter, and he can handle the ball and shoot the ball. He’s turned himself into a player that is just really difficult to deal with.

“So, especially when we’re in times of stress, we want to — he doesn’t have to shoot the ball, but we want to play through him,” the coach mentioned.

It had to be one of the most hotly contested routs you can imagine as El Dorado, under new head coach Jimmy Porter, kept playing with more and more intensity, hustle and effort as the game went along.

Despite trailing 42-17 at the half, the Wildcats did not quit.

“I knew they wouldn’t,” said Abrahamson. “It’s one of those things where — and we’ve been there — you’re trying to get some things going and you get down. When you’re a first-year coach, one of the things is you just want to teach them not to give up.

After Hunter made it 64-51, Will Diggins, following his own miss, scored and was fouled. When he completed the three-point play, the margin was back to 16.

And that started a series of fouls that cost the Wildcats three players. Moments later, Diggins picked up his fifth foul.

“We need to do what we’re supposed to do,” said Abrahamson. “We had several possessions where, defensively, we were letting them in the lane, and we were coming out of our defensive stance.

“And it was a tightly officiated game,” he noted. “So that didn’t work in our favor at times.

“On offense, I thought there were times where we just kind of settled,” the coach mentioned. “I don’t mind shooting 3’s. We’re going to shoot a lot of 3’s, but a lot of times it’s how we get those 3’s. If you make one pass and shoot the 3 and we miss, then it just turns into bad basketball and having to play more defense.”

The fact that his team was playing its third game in four days was a factor, Abrahamson allowed.

“It was a hard, hard week for our players,” he acknowledged. “You know, Benton and everything that comes with playing that game and preparing to play that game is so much — it’s kind of draining. And it’s a trophy game.

“Then, going to Jacksonville and taking their best shot, getting down early. Then that becomes a draining, taxing situation.

“Then, you come in here and it’s Senior Night and there’s more emotions,” the coach said. “You get up and you know you’re up against a team that’s not going to lay down. They’re going to fight back.

“You’ve just got to keep taking everyone’s best shot over and over again. So, in that regard, I’m really proud of our guys. I hope, in February and March, if we have to play three games in a week again — I hope we finish a little stronger but it’s still mid-December and that’s what we’re working towards.

With Schroeder starting the scoring with a 3, the Hornets surged to a 13-2 lead starting out. Montgomery followed up with a steal and layup.

El Dorado’s Isaiah Ramey, who led his team with 24 points, hit a jumper in the lane but Hunter nailed a 3 then fed Diggins for a bucket inside. Kade Ruffner’s 3 capped the opening run.

The Hornets led 18-6 at the first break.

They poured it on in the second quarter. The lead was 10 at 27-17 with 2:21 left in the half. Porter was then cited for a technical foul as Bryant’s Cory Nichols was fouled on a drive. So, Nichols converted both of his free throws for the common foul then Hunter pocketed the two free throws for the technical. And with the subsequent possession, Gabe George ripped a triple to make it 34-17.

Schroeder added a free throw, Hunt hit a jumper in the lane then Adams popped a 3. Hunter capped the 15-0 run with a steal and a dunk.

“We just tried to make them uncomfortable,” Abrahamson said of the early success. “No one had pressured them this year.

“It’s something I want to get to, playing more of a full-court defense, and we just haven’t had time to work on it,” he said. “And I wasn’t planning on working on it. But, once I watched some film from El Dorado, I just thought, you know, no one’s done that to them, and I want to do it. Maybe it will help us get more guys in the game and we’ll see. It didn’t look good at first and then the second quarter it looked great. Second half, we tried to switch up the pressure and — I wouldn’t say we were out of gas, but we were running low on gas in that second half.”

The Wildcats whittled the lead to 15 briefly in the third quarter. Both teams missed opportunities at the free throw line. But, in the last two minutes, Hunter and Ruffner went 6 for 6 at the line, nailing down the victory.