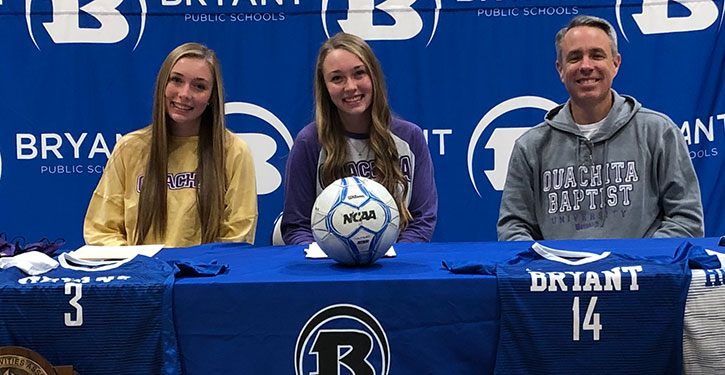 As voluntary assistant John Lowery noted, 2017 was kind of a lost season for the Bryant Lady Hornets soccer team. They were great before that, always a threat to win a State title. In 2018, the program returned to prominence and it wasn’t just a coincidence that Nicole Inman became the head coach that year, after great success as a club coach. And that her twin daughters, Abbey and Ashton, came into the program as freshmen.

The three of them played key roles in getting the Lady Hornets back to the Class 6A State championship game. Though they fell short that hear, the team got even better in 2019 and captured the State title.

Last spring, the junior season for the girls was interrupted then cancelled due to the coronavirus. So, they’re bid to repeat as champions, will have to wait until spring 2021.

In the meantime, Abbey and Ashton Inman, daughters of Nicole and Scott Inman, signed national letters of intent to continue their education and soccer careers at Ouachita Baptist University in Arkadelphia.

“OBU is getting two of the most talented players in Arkansas,” said Bryant’s interim head coach Olivia Allard. “They’re very versatile. You can put them anywhere on the field.

Allard mentioned, “They’re very coachable players. You can tell they’re very open to anything that can make them better. They’ve got a love of soccer, a desire to be better, and to be the best players they can be out there. They’ve got good soccer genes.”

The girls can play wherever they’re needed.