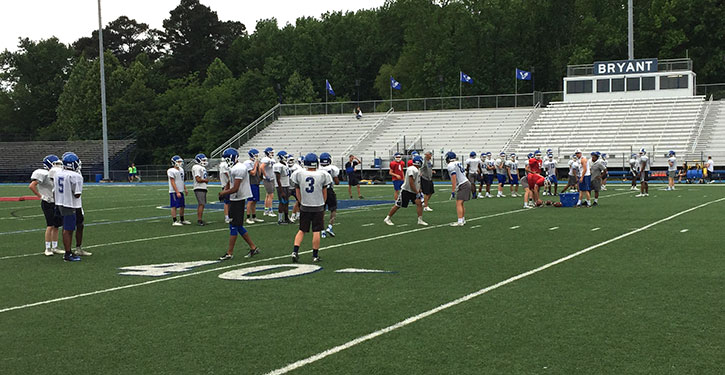 The Bryant Hornets football team wrapped up spring practice on Wednesday and it wasn’t difficult for head coach Buck James to see a difference from the previous spring when he and nearly an entirely new coaching staff was on the scene. Spring ball in 2016 was as much about the coaches getting to the know the players and vice versa including the players learning what would be expected of them.

The progress from those days and the end of the season when the Hornets reached the Class 7A Playoff semifinals was remarkable.

James has seen some carryover.

“We’re better than we were this time last year,” he acknowledged. “I think that, defensively, we’re light years ahead of where we were last year. Offensively, we’re a lot better and we’re further along but we’re still behind because, with a new coordinator and putting in new stuff and some new terminology, that’s put us behind a little bit. But we’re a lot better at what we do.”

But, James said, “We’re behind where I want to be. Physically, we’re getting closer. Mentally, we’ve still got to do a lot more to get ourselves where I think it takes to be a championship-caliber team. It’s not our work ethic. It’s not our abilities. It’s more our approach and what we’ve got to do beyond the two hours we’re here each day at practice. I think that’s got as much to do with winning championships as X’s and O’s do.

“I think we’ve got to do some things,” he continued. “The cohesiveness it takes to make a team; what my role is on this team; what am I willing to do to sacrifice to help this team; what do I have to change about who I am and what I do to help this team, whether it’s to gain 10 pounds of muscle or lose five pounds of fat or to understand that I’ve got to play this position even though I think I’m probably better at that position, because it helps our team.

“Those are the little things I think that we need to concentrate on throughout the summer to help ourselves improve,” the coach emphasized. “Being at practice, doing what I’m supposed to do at practice, being in the weight room, and being on time for practice — those are things that affect your team as much as missing a block or tackle.

“We can talk about that in every sport. It’s a total commitment. In today’s times, there’s a lot of things that pull at these kids. I’m thankful that we have the guys that we have. I just want more because I think we can have a championship-caliber program. That’s what we’re striving for.”

Asked if there have been any surprises or revelations individually that he’s notice, James said, “We’ve had some guys that came back and have improved greatly since last year. Short of calling a few names, we’ve had offensive linemen that we felt like would be a year away coming into it that are starting for us. We have receivers that we felt like were maybe a year away or so from helping us and they’re getting a lot of playing time.

“Then we have guys who started for us last year that we feel like ought to be a lot better and doing a lot better job than what they’re doing, which is still good but it’s got to be at a whole other level,” he added. “I think there’s got to be a difference between good and great. There’s got to be a difference in average and good. I think we’ve got to move past some of those hurdles and really go out there and go the extra mile to help our team to be successful and help themselves be successful, whether it’s in the classroom, the weight room, on the football field or away from the football field. It all goes hand in hand.”

On Monday, June 12, the varsity will engage in another team camp at North Little Rock while the JV participates in a team camp at Maumelle. There will be a JV 7-on-7 with Benton the next day. A two-day varsity 7-on-7 at Pulaski Academy will be held June 15-16.

Bryant will host a varsity team camp on June 19 with the JV in a team camp at North Little Rock.

That will wrap up the first half of the summer with the two Arkansas Activities Association’s mandated Dead Weeks from June 25 through July 8.

Both varsity and JV will compete in a 7-on-7 at Malvern on July 12 then over the weekend of July 14-16, the varsity will travel to Dallas to compete in the prestigious USA Football National 7-on-7 championship.

A team camp at Watson Chapel followed on July 17 then the first day of fall camp will be Monday, July 31.

All dates are tentative.