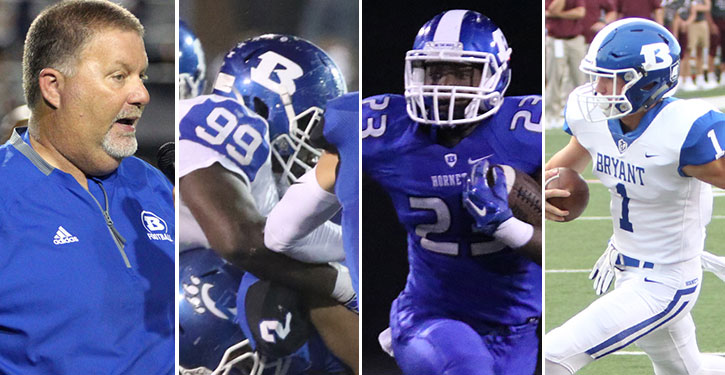 Robinson, also a junior, is a defensive lineman who came into last Friday’s game against Conway with two sacks, five tackles for losses to go with 22 tackles.

Vail, a senior, who punts, returns punts, plays safety on defense and wide receiver and ‘Wildcat’ quarterback on offense. He has scored seven touchdowns with 94 yards on 28 carries and, going into the Conway game, had 30 tackles, two pass break-ups and a forced fumble.

James, in his second year as Bryant head coach, has led the team to an 18-4 record going into next week’s quarterfinal playoff game. The Hornets have won 16 of their last 19 games with the only three losses to North Little Rock. Bryant’s 42-31 comeback victory over Conway was the 150th of his head coaching career.

David L. Moore, Senior Vice President – State Manager for Southern Farm Bureau Casualty Insurance Company, said: “This list of players includes some of the best student-athletes in our state, and Farm Bureau Insurance wishes each of them continued success the rest of the season. Farm Bureau Insurance is proud to honor excellence as the title sponsor of this outstanding event.”

Farm Bureau Insurance has supported education and community involvement in Arkansas for more than 65 years.