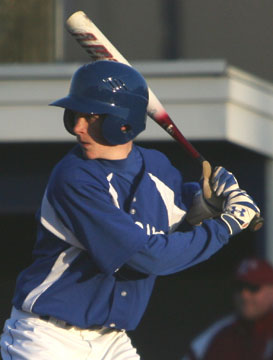 PEARCY — The thing about being a closer is that, you work so few innings that one blow-up can wreck your earned run average. Then it takes that many more appearances to whittle it down.

Such had been the case for Bryant senior Kaleb Jobe who had earned three saves but had a rough outing against Conway in a wild game that Bryant wound up winning 10-9. He then had similar trouble in a brief relief appearance on Saturday, March 21, in the midst of a come-from-behind win by Monticello.

But Jobe got a start on Monday at Lake Hamilton and took a big chuck out of his inflated ERA by going the distance and allowing just one run on four hits as the Hornets got back on the winning track in an efficiently played 3-1 win in front of a crowd that was two-thirds Bryant fans.

Jobe retired the first eight batters he faced, gave up a single then retired the next four. After the Wolves got on the board with a couple of hits in the fifth, the right-hander set down six of seven to close it out. He struck out six and walked no one.[more]

“He did a great job,” stated Hornets coach Kirk Bock. “You could tell he just settled down with confidence and it was bam, bam, bam. He did an excellent job and we did a great job defensively behind him. Jonathan Wade made a real good play to end it.”

Wade, who got his first varsity start of the season at third, ranged to his left and charged in to spear a bouncer off the bat of Lake Hamilton’s Jared Webb and threw to first to get the final out. Earlier, Jobe had helped himself by snagging a hot liner back to the box by Levi Runyan.

Bryant had runners aboard in each of the third three innings but didn’t break through until the fourth. Brady Butler led off the inning with a single up the middle then Sawyer drilled one in the gap in left-center. Butler raced around the bases and tried the score. The relay throw was off-line but Lake Hamilton catcher Rob Curry gathered it in and lunged at Butler as he passed. Though Bock and third base coach Frank Fisher contended that the tag attempt missed, but Butler was called out nonetheless. 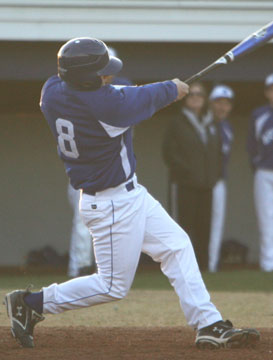 Sawyer wound up at third, however, and a pitch later, Bullock laced an RBI single to right-center to bring him in.

In the second, Justin Blankenship drew a one-out walk. Hunter Mayall followed with a bouncer to second. The Wolves’ Tyler Bradshaw ranged in and two his left then quickly turned and threw toward second to try to start an inning-ending double play. But the throw eluded Runyan, the shortstop, and rolled into shallow left field. Blankenship wound up at third and Mayall at second.

Caleb Garrett, who had singled in the first, was given an intentional walk and Lake Hamilton made a pitching change, bringing in Jared Webb for starter Chris Walker, to face Jobe.

On a 1-2 pitch, Jobe laced a single to left to drive in the run.

Webb struck out Butler then Sawyer was robbed of an RBI hit when his shot to first ricocheted off Walker. Bradshaw was there, however, to make the play, throwing to Webb covering to end the inning and keep it 2-0.

Walker led off the home fifth with a single up the middle, just the second that Jobe and surrendered. Webb sacrificed him to second then a bouncer to Butler at first by Will Harris moved Walker to third for Rob Curry. The count went to 1-2 before Curry smacked a liner just beyond the reach of Sawyer at short for an RBi single.

The count went to 2-1 on the next batter, Dale Wilson, when courtesy runner Randy Young tried to steal second. But Hornets catcher B.J. Ellis put his throw on the bag to set him down, ending the inning.

And the Hornets got that run back in the top of the sixth. Bullock singled to left, moved to second on a wild pitch, took third on Tyler Brown’s sacrifice bunt and, with two down, scored on a sharp single to right that just got past the lunging Bradshaw for an RBI single.

Blankenship swiped second and Mayall walked but Webb got out of the jam by getting Garrett to bounce to short for the force at second.

In the home sixth, Dalton Daniels lined a one-out double to left-center but Jobe fanned Runyan and got Bradshaw to pop to right. The Wolves were retired in order in the seventh with Wade’s gem finishing the game.

“When we got opportunities to hit with men in scoring position, we did,” Bock noted. “And we played hard. It’s a lot better to win like this than lose like we did (Saturday).”

The Hornets were set to host Texarkana on Thursday, March 26, then visit arch-rival Benton on Friday.