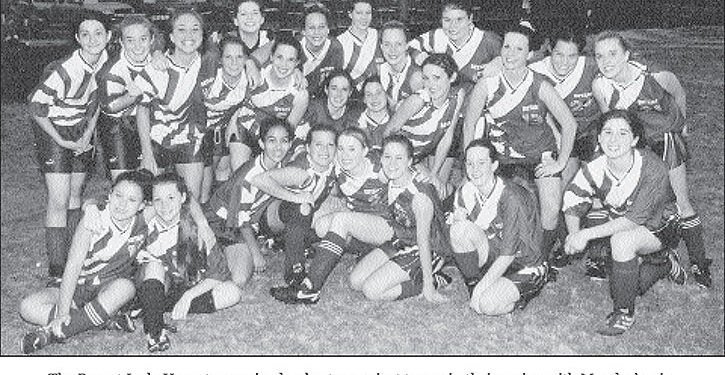 CABOT — A week after winning just one of five games at the Mount St. Mary’s Tournament at Burns Park in North Little Rock, the Bryant Lady Hornets softball team went to Cabot and won four straight including an extra-inning thriller against the host team in the semifinals. And, along about midnight as Saturday, March 23, turned into Sunday, March 24, the Lady Hornets were awarded the championship trophy.

The Lady Hornets came into the tournament 2-5 and finished 6-5, feeling much better about themselves and their season. They opened the event with a 5-1 win over Batesville on Friday. On Saturday, Harrison was their first victim, 10-3, setting up the showdown with Cabot which the Lady Hornets won 4-3 in nine innings. The title game started after 11 p.m. but Bryant made quick work of Nettleton, dusting off Nettleton 14-4 in four innings to claim the title.

So, why such a stark contrast in results in back-to-back tournaments?

“I think just getting some game experience,” said head coach Stacy Mallett, whose team had only been able to play two of their first five games due to rainouts prior to going to the MSM tourney. “When we got to Burns Park, we just needed to play. Even though we ended up 1-4 in that tournament, we were able to see some things that we needed to work on the next week in practice.

“Although it rained pretty much the whole week, we got a lot of swings,” she added. “My husband Kevin, who used to play baseball professionally, came up and helped with our hitting and it made a big difference.

“When we went to Cabot, we started off hitting really well. We set a goal to try to produce a run an inning, to do whatever we had to do to get that. And we hit well, we bunted well in situations where we needed to, our defense was excellent and we put together four really, really good games.”

It also helped that Lindsey Sullivan continued to develop in the pitcher’s circle to give starter Misti Phillips some relief.

“Misti was great,” Mallett noted. “And Lindsey did a great job. She pitched half of the first two games we played, so we had some rest for Misti’s arm there and that made a big difference.”

In the title game, the Lady Hornets trailed 1-0 after an inning then took over with a five-run second. After they got three more in the third, a six-run fourth put the game away early.

Eight of the nine Bryant batters hit safely with Kelli Steed collecting a pair of hits.

Four walks contributed to the second-inning outburst. Phillips drew the first one. With two outs, walks to Rachel Blakley, Stacy Workman and Sullivan made it 1-0. Steed followed with a single then Amie Hubbard cracked a double to make it 5-0.

In the third, a walk to Allison Mitchem was followed by a triple from Phillips. Randall’s sacrifice fly made it 7-0. Lindsey Stone walked, took second on an error, swiped third and scored when Workman drilled a double.

Nettleton countered with three in the bottom of the inning, but the six-run fourth trumped that. Steed’s second single opened the floodgates for Bryant. Hubbard walked and Mitchem doubled in a run. Phillips walked, Randall singled and Stone picked up the RBI by grounding into a force at second. Blakley then chased Stone home with a triple. Workman reached on an error as Blakley scored.

Steed scored the decisive run in the top of the ninth on a wild pitch. In turn, Cabot, which had stayed alive with a run in the eighth after Bryant had scored, made a bid to keep the game going in the ninth, but stranded two baserunners.

The Lady Panthers had taken a 2-0 lead in the first inning but couldn’t score again until that eighth inning.

Bryant managed a run in the second when Mitchem and Phillips doubled.

It stayed 2-1 until the sixth when Sullivan reached on a dropped third strike with one out. She stole second, took third on a sacrifice bunt by Steed and scored on a wild pitch.

Bryant took the lead in the top of the eighth when Stone scored on a wild pitch. A two-out RBI single by Amber Jolly tied it back up in the bottom of the inning, however.

Sullivan and Phillips each had two hits to lead the Lady Hornets past the Lady Goblins in Saturday’s first game. Phillips and Sullivan held Harrison hitless until the fifth inning after Bryant had built a 10-0 lead.

The Lady Hornets got two in the first. Sullivan singled to right, stole second and took third when Steed reached on an error. Hubbard’s squeeze bunt was successful to break the ice. Steed eventually scored on a passed ball.

In the third, Steed singled and Harrison misplayed Hubbard’s bunt. Mitchem then blasted a double. Phillips walked and Randall singled in a run. A fourth run scored when Blakley reached on an error.

Steed again instigated things in the fourth, drawing a walk and stealing second. She scored when Hubbard reached on an error, again on a bunt. Hubbard scored on an wild pitch.

In the fifth, Harrison misplayed another bunt allowing Blakley to score after she had singled and stolen second. Sullivan singled home Workman with the final tally.

On Friday, Mitchem and Randall led the Bryant offense with two hits each while Phillips and Sullivan stopped the Lady Pioneers on just two hits. Bryant’s only two errors of the game contributed to Batesville’s lone run in the top of the third.

By then, Bryant led 2-0. In the first, Steed doubled, took third when Hubbard beat out a bunt single and scored on a bunt by Mitchem.

In the second, Randall singled. Stone grounded into a force but stole second and eventually scored.

After Batesville scored, the Lady Hornets increased the margin to 4-1 in the home third. With one out, Steed reached on an error. Hubbard grounded into a force but Mitchem singled and Phillips’ grounder was misplayed, loading the bases for Randall, who belted a double.

Blakley scored the final run in the fourth. She was hit by a pitch, swiped second, took third on a sacrifice bunt by Workman and scored on a grounder to third by Sullivan.