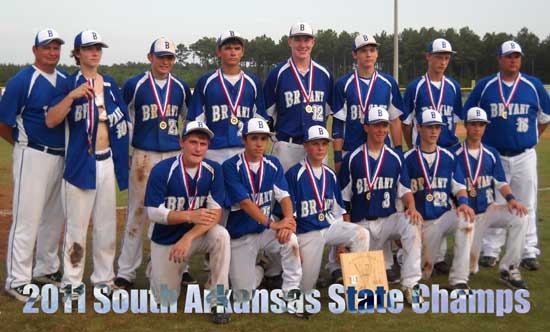 CROSSETT — When lightning and stormy weather halted the championship round of the Babe Ruth 15-year-old State Tournament on[more] Wednesday, the El Dorado All-Stars were off to a good start in their quest to get it to a winner-take-all final against the unbeaten Bryant All-Stars.

But it didn’t take long on Thursday when play resumed for Bryant to get even and, with a stellar pitching from Nate Rutherford and clutch hits in the top of the seventh inning from Chase Tucker, Jack James and Austin Caldwell, Bryant spoiled El Dorado’s plans.

The Bryant All-Stars’ 5-3 win secured the State title and a berth in the Southwest Regional Tournament in Plainview, Texas, starting July 29.

Last season, many of the same players were on the Bryant team that reached the Babe Ruth 14-year-old World Series.

With the game tied 3-3 in the top of the seventh inning, Tucker smacked a single up the middle and, an out later, raced home on a double by James who followed when Caldwell belted a two-bagger.

With the 5-3 lead, Rutherford took the mound in the bottom of the inning and struck out the side to nail down the championship.

After Rutherford had given up three runs on three singles, a hit batsman and walk to open the bottom of the first on Wednesday, he allowed just one base-runner the rest of the game, retiring 13 in a row before giving up a two-out single in the fifth. He then finished by setting down the next seven. That’s 20 of the last 21 batters he faced.

Bryant had loaded the bases in the first on walks to Dale, Tucker and Phillips but didn’t get the hit needed to dent the plate.

The game was about to go to the third when it was halted. When it resumed on Thursday, Dale delivered a single, Graddy walked and Tucker singled. With one out, James had a base hit and the game was deadlocked.

Miller walked to start the fourth then Dale got a bunt down so well that he beat it out for a hit. But a doubleplay on a grounder to third took the starch out of the inning even though Tucker was hit by a pitch to put runners at first and second.

Bryant was retired in order in the fifth but made a little noise in the sixth. With one out, Miller singled and Dale walked but another doubleplay got El Dorado out of trouble.

But only until the next inning.

James fired a two-hitter over five innings, walking four and striking out six. He no-hit Clark County over the first three innings.

And he got all the runs he’d need in the second when Bryant scored four times. James actually started the uprising with a base hit to right. Singled by Rutherford singled and Thompson reached on an error with one out. Miller’s bunt went for a hit then Dale and Graddy delivered base hits to cap the inning.

In the top of the fourth, the rout was on as Bryant added five more runs. Miller drew a walk to open the inning. An out later, Graddy singled and Tucker walked to load the bases for Strain who came through with a base hit. James walked then Caldwell laced a double to make it 9-0.

Clark County’s fourth began with a walk. After the next batter grounded into a force at second, the first hit was delivered, a single to left. With runners at the corners, a fly to hit to Tucker in center. With the runner at third tagging, Tucker came up with the catch and fired home in time for Graddy to apply the tag, completing a scintillating inning-ending doubleplay.

Bryant finished the scoring with three in the top of the fifth. Thompson and Miller singled then Graddy drilled a double to right. After moving to third on a groundout by Tucker, Graddy scored the final run on an infield hit by Strain.

Clark County loaded the bases on a pair of walks and a single in the bottom of the fifth but James got the last out on a pop to Rutherford at first.