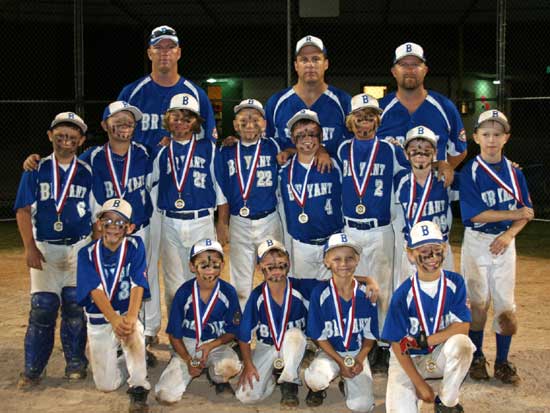 The team has qualified to play in the Southwest Regional Tournament in Madisonville, La., starting July 22.

In the championship round, Benton forced a winner-take-all final with a last-inning rally that resulted in a 7-6 win over Bryant.

In the bottom of the first, Benton got its lead-off batter aboard but the Bryant defense didn’t allow him to get past second as the next three batters were retired.

Bessire started the second with a single but was forced out on a grounder to short by Turner. Pennington, however, belted a triple to chase him home then scored a pitch later on a triple by Orender. A single by Schroeder made it 6-0.

They threatened to get more when Hathcote and Speer singled but, with two down, Littleton bounced into a force at third on a nice play by the Benton shortstop.

Benton had its best chance to score in the bottom of the inning, but the lead-off hitter was thrown out at second from right field when he tried to stretch a single into a double. Still, Benton loaded the bases with one out before Bryant got a force at the plate then retired the side on a grounder to third that resulted in a force out.

Benton only managed one baserunner after that, on a one-out single in the bottom of the fifth and final frame.

Meanwhile, Bryant tacked on an insurance run in the top of the fifth on singles by Schroeder, Speer and Littleton.

In the first game, Bryant held 4-1 and 6-4 leads only to have Benton rally for the win with three runs in the bottom of the sixth.

Bryant scored first. In the opening frame, Noah Davis singled and stole second. He scored on a double by Cooper Davis.

The Stars made it 2-0 in the top of the third on singles by Schroeder, Orender, Speer and Pennington.Benton dented the plate for the first time in the bottom of the inning, but Bryant turned the 2-1 edge into a 4-1 lead in the top of the fourth. Cooper Davis ripped a double and, after Dillon singled, Clay cracked an RBI double. Dillon scored on a sacrifice fly by Wilson.

It stayed that way until Benton rallied for three in the bottom of the fifth to tie the game. Bryant countered with a two-run sixth. Singles by Cooper Davis and Dillon were again followed by a run-scoring double by Clay. Wilson’s groundout got Dillon home, making it 6-4.

But Benton came back again to win it with one out in the bottom of the inning.