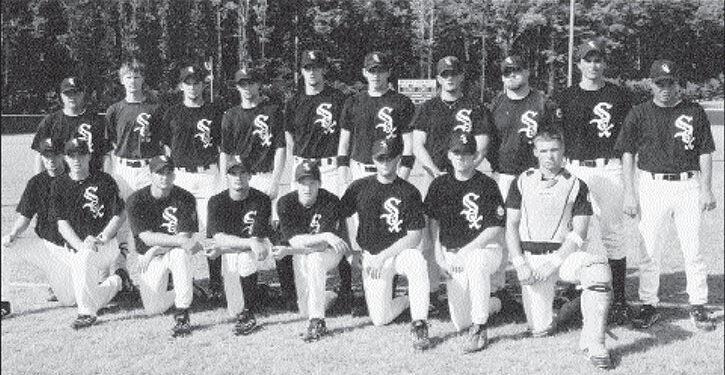 Repeating as champions is never easy. After a team has won once, everyone else is gunning for them the next season. In baseball, that team almost always gets to face the other guy’s best pitcher, best lineup, best effort.

When it happens, it’s usually a team that won young the first time around, picked up invaluable experience and called on that to get them through the tough times the second go-round; a team that had been through it all before.

But, for the Bryant Blacksox AAA American Legion team, such was not necessarily the case which makes it an even greater achievement that they captured the Area IV District Tournament title for the second year in a row and earned another trip to compete in the State Tournament in Fayetteville.

In many ways, it was a new team. Only three players on the 2002 Sox were among the top nine in at-bats in 2001. Though the team returned pitchers that accounted for 21 of the team’s 42 victories in ’01, nine of those wins were accounted for by Matt Lewis who, this year, has never quite returned to his 2001 form after spending the off-season concentrating on football at Arkansas Tech University. He’s pitched 11 innings.

It’s a team that’s proved to be good at tournaments — obviously something that bodes well for State, a double-elimination tourney that begins Saturday, Aug. 2, with Bryant’s game against Paragould at 10 a.m. at the University of Arkansas’ Baum Stadium. The Sox have played in three tournaments now, finishing as runner-up at the Twin Lakes Classic in Mountain Home, winning the Tournament of Champions in Alton, Ill., and now capturing the District tourney title.

It came down to a duel between Bryant (34-14) and Arkansas Trailer of Little Rock. They played three times. The Blacksox defeated Trailer 13-5 on Saturday night to clinch a bid to State then topped A.T., 7-5, for the championship on Monday. The latter victory came after Arkansas Trailer had forced the finale with an 8-5 win over Bryant earlier Monday evening.

On Sunday, Trailer clinched its trip to State with a nail-biting 4-3 win in 10 innings over a Texarkana team that had posted 37 wins on the season.

Bryant, which held a first-round bye, opened with a 13-5 win over Sheridan on Friday after Sheridan had pinned a 3-2 loss on Pine Bluff on Thursday.

“When the games were on the line, we played ball,” said Bryant manager Craig Harrison. “The second game tonight, they just bore down. We were out of pitching and had to throw A.J. (Nixon) out there and his back’s killing him, he can’t move but we asked him for two innings. Then Kevin (Littleton), we asked him to give us three or four and he got us into the seventh. Chance (King), we brought him in and he had to bat because we’d used up our DH. He turned his knee and couldn’t finish the eighth but B.J. (Wood) said, ‘Give me the ball.’

“We didn’t want to throw Scotty (Yant), but we threw them just about everything else we had,” Harrison added.

The win made the Sox the top seed from the District.

“We wanted to get the one seed,” Harrison asserted. “I didn’t want to come out here and lose two even though it wouldn’t have mattered really. I just didn’t want to lose two going into the State Tournament. So, we’ll suck it up and go up there and play and who knows? We’re going to go up there to win it.”

Bryant hosted the District this year and was complimented for it. “I thought it was very well run,” Harrison stated. “I was very pleased with all of our volunteers, who worked the gates, the field, cleaning up dugouts, getting towels ready. It was just a total effort by the Bryant community and I thank everybody that helped us and supported us. You know, we’re here doing it because we’re playing but some of these people that helped us didn’t have kids or anybody playing. They just love our program and that’s what it takes to have a successful program. I want to say thanks to all of them.”

The Sox scrapped for four runs in the fourth inning to gain the upper hand and held off a 13-hit effort by AT to win the title.

Bryant trailed 1-0 going into the fourth. Jeff Carpenter, who played a spectacular game defensively at third, was hit by a pitch from Trailer starter Will Schmidley to open the inning. Matt White singled and that brought a pitching change. Aaron Meeks started off by hitting Cody Graddy to load the bags.

Kevin Littleton drove in a run with a grounder to second then Derek Chambers bounced one that way, too. This time, Trailer second sacker Casey Dwyer fired home to try to get White, but the throw was wild and both White and Graddy scored to give Bryant a 3-1 lead. On the next pitch, Nixon singled to left to drive in Chambers from second.

After Trailer made it 4-2 on a two-out RBI single by Dwyer in the fourth, Bryant scored when Carpenter singled, White and Graddy walked and Meeks uncorked a wild pitch.

In the sixth, Chambers led off with a double, took third on a single by Cody Dreher and scored on Yant’s sacrifice fly, making it 6-2.

But Trailer rallied for two in the seventh as Littleton tired. A Bryant error contributed.

Trailer seemed to have the momentum, but the Sox got a break in the top of the ninth to get an insurance run. White was issued a one-out walk. He swiped second then scored when Littleton’s grounder to short drew a wild throw to first.

Wood, who retired all four batters he faced, got a big lift from Carpenter to open the bottom of the ninth. He robbed Mike Muller of an extra base hit with a diving stop behind the bag, throwing him out by a step.

A four-run eighth that featured a three-run homer by Muller snapped a 3-3 tie and keyed the win.

Bryant rallied in the bottom of the eighth but the uprising fizzled short of tying the game.

Both teams scored twice in the fourth. Aided by a pair of errors, Trailer took the 2-0 lead initially. In the bottom of the inning, Carpenter and Littleton drew walks before Chambers came through in the clutch, clubbing a two-run double.

Singles by Trevor Holbert and Drew Holbert and a grounder to short on which Wood robbed Nathan Frazier of a hit, put runners at second and third. Trailer then snapped the tie when Meeks got a squeeze bunt down.

The Sox tied it back up in the bottom of the seventh. Yant and Carpenter had walked then White grounded into a force at third. On a heads up play, Carpenter hustled to third when a late throw went first in a feeble attempt to get the speedy White on a doubleplay. That proved key when White took off early for second, drawing the attention of pitcher George Bain and allowing Carpenter to sprint home for the double steal.

The tell-tale eighth began with walks to Cory Willett and Drew Holbert around a strikeout. Frazier singled in Willett but then Chambers, the third Bryant pitcher after Justin Woods and Daniel Minton, got the second out. But Muller socked a 1-1 delivery for the three-run jack.

Littleton singled and Nixon ripped a triple to drive him home in the bottom of the inning. And when a late throw to third sailed into the Bryant dugout, Nixon scored as well.

A two-out single by Yant was wasted as was Clay Jones’ two-out two-bagger in the ninth.

The Sox erupted for 15 hits including three by Yant and two each from Graddy, Littleton and Chambers. In addition, Chambers drove in four.

A seven-run third that featured six consecutive hits to start the inning, proved the difference.

Each team had scored in the first. Trailer put together three straight hits to pick up its run against Dreher, the Bryant starter. Graddy singled in a run for Bryant.

In the third, Carpenter, White and Graddy opened with singles, putting Bryant ahead 2-1. Littleton then drilled a two-run double and advanced to third on a bad throw back to the infield. Chambers doubled him home then scored on Nixon’s two-bagger, forcing a pitching change as Schmidley relieved Meeks.

Jones drew a walk then Yant singled up the middle to plate a run. Walks to Wood and Carpenter forced in Jones to make it 8-1.

Trailer chiseled two runs off the lead in the fourth and two more in the fifth but managed just two hits over the final three innings as Wood and King closed the door.

The Sox padded the lead with a run in the sixth on a two-out bad-hop single by Yant that scored Chambers from second after he had walked.

In the seventh, walks to Carpenter, Graddy and Littleton loaded the bases for Chambers, who delivered a sacrifice fly.

The Sox took any remaining mystery out of the outcome with a three-run eighth highlighted by White’s RBI triple. Carpenter, who had walked for the third time in the game — there were 22 walks between the two teams — scored on the play. Graddy was then hit by a pitch and Littleton walked before Chambers hit a two-run single.

King walked a couple to make it interesting in the top of the ninth but got Bain to pop out to end the game.

It was a scoreless game until the third when Bryant erupted for five runs. Singles by Wood and Carpenter opened the inning and, when the latter hit was misplayed in the outfield, the runners advanced to second and third. A wild pitch allowed Wood to score the first run.

After White walked, Graddy doubled in a run and, an out later, Chambers singled in a pair. Jones capped the inning with an RBI double.

Sheridan scored twice in the top of the fourth but another error cost the ‘Jackets as Bryant added a run without a hit.

In the fifth, Nixon’s fly to right was misplayed and Jones doubled him home. With two down, Wood came through with a single to plate Jones, making it 8-2.

Sheridan committed two more miscues in a six-run sixth that blew the game open. Graddy singled to open the inning. After Littleton was hit by a pitch, Chambers singled in a run. Nixon followed suit then a third run scored when Jones bounced into a force at second. After Andrew Norman walked, Wood laced a liner to center that got past the outfielder and rolled to the fence allowing Wood to circle the bases, scoring behind Jones and Norman.