The Bryant Black Sox AAA American Legion team continued to get great pitching as they held the Sheridan Yellowjackets to two runs on seven hits while sweeping a Zone 4 doubleheader on Saturday, June 10.

In the opener, Casey Grisham allowed one run on three hits over six innings to pick up the win. Justin Wells added a scoreless seventh inning of work. The Sox broke open a close game with five runs in the sixth inning in an 8-1 victory.

In the nightcap, the Sox eased to a 13-1 win in five innings with Cory Lambert, Aaron Davidson and Ryan Wilson combining to stop Sheridan on four hits.

The wins improved Bryant to 11-1 overall and 7-0 in league play going into an out-of-zone contest at Stuttgart on Monday, June 12.

In the first game, Grisham and Sheridan’s Brian McCrackin were in a scoreless duel for three innings. The Sox managed a run in the fourth when Davidson doubled with two down and Devin Hurt came through with a clutch RBI single.

Grisham, who struck out seven and walked just one in six frames hadn’t allowed a hit since the first inning when McCrackin slapped a two-out single to right in the top of the fifth. But he was stranded and the Sox added two more runs in the bottom of the inning. Wilson singled, advanced to second on Lambert’s sacrifice and scored on a base hit by Travis Queck, who raced to second when the ball was bobbled in the outfield. That enabled him to score on a single by Joey Winiecki.

Winiecki, by the way, hit in both games to extend his hitting streak to 11 games.

In the sixth, Sheridan cut it to 3-1 when Matt Buie doubled, took third on a wild pitch and scored on a groundout.

McCrackin gave way to Kris Hurtt in the bottom of the sixth and the Sox blew the game open. Davidson doubled and Hurt singled him in again. After David Martin walked, Wilson doubled in a run. With one out, Queck cleared the bases with a triple then scored the final run on Winiecki’s sacrifice fly.

Wells issued a walk to start the seventh but a doubleplay and a strikeout followed, putting an end to the contest.

In the second game, Lambert worked the first two innings then felt some tightness in his back and came out. Davidson, who has been hampered by a sore elbow, worked one inning then Wilson faced the minimum over the final two innings.

The Sox took a 3-0 lead in the first with Davidson doubling in a pair then scoring on a single by Hurt.

A six-run third blew the game up. Queck tripled in a run then scored on a double by Short. An error helped produce two more runs to go with Danny Riemenschneider’s RBI single and a sacrifice fly by Wells.

Sheridan loaded the bases on a pair of singles and a walk in the bottom of the inning and got its lone run on a sacrifice fly by Kris Pruitt.

In the fourth, Winiecki extended his hitting streak with a two-run single. In the fifth, Riemenschneider singled, Wells tripled and Davidson drove in the final run with a sacrifice fly. 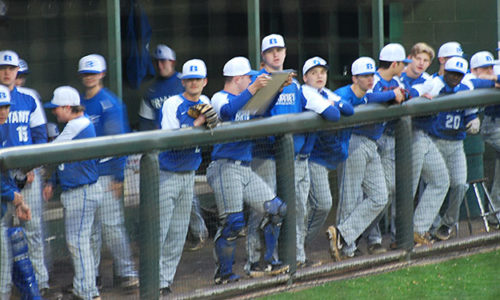