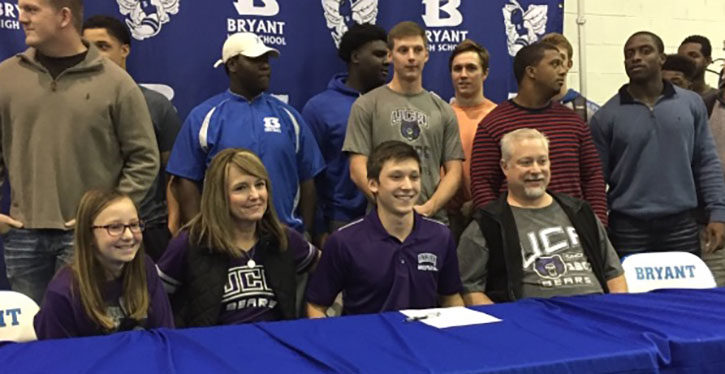 Kicking it to Conway: Ray signs with UCA

Before his sophomore year in high school, Hayden Ray had never seriously kicked any ball that wasn’t round.

He’d been a soccer player since he was 4 years old but didn’t really have the size nor the inclination to play a game with an oblong ball.

Now it just so happened that the Bryant Hornets football team was staring at an approaching gap in their long tradition of excellent kickers that included three brothers named Denker. The last of that trio, Alex, was entering his senior campaign that fall.

So the football coaches including assistant soccer coach Clint Shadwick were looking for a strong leg to develop as a successor to Denker.

Ray got the coach’s attention.

“Coach Shadwick was like, ‘Hey, have you ever kicked?’” Ray recalled on Wednesday. “I was like, ‘No, not in my life.’ He’s like, ‘Okay, after practice, let’s go kick some.’

It turned out to be quite a shot.

Ray, indeed, took over as the first-string kicker as a junior. All he did was lead the team in scoring in 2015 with 71 points, tying the school record set by Todd Bryan in 2002 with 13 and converting 32 of 34 extra points.

That created some high standards for his senior season.

“The one record I really wanted to beat was most field goals in a season,” he related. “Knowing that I’d tied it my junior year, I wanted to beat it because I was one away. Once I hit 13, I figured out the state record was 17. I was like, ‘Okay, let’s go for that now.’ So, it just kept building up, building up and I was able to break it.”

Along the way, he tied the school mark for longest field goal at 49 yards (previously done by Nathan Harbert in 2000. He was good on all 35 of his extra points and drilled 24 touchbacks out of 65 kickoffs, which also matched a school record set by Bryan in 2002.

Ray, the son of Scott and Stacy Ray, was named all-State, all-conference and, on Monday, it was announced he’d been named First Team all-American by Kohl’s Kicking Camps. To top off all of that, Ray, a lifetime soccer player, signed a National Letter of Intent to continue his education and his football career on scholarship at the University of Central Arkansas (UCA) in Conway.

“In 30 years of coaching, I’ve had many, many players sign but this is my first kicker,” said James, who introduced him at Monday’s signing ceremony as Hayden “The Leg” Ray. “The hardest way to go to college and be a football player is as a kicker, trust me. I think Hayden can tell you that. But the thing is, Hayden had great work habits, great discipline and he got better and stronger each and every year. He found out the weight room was really important.”

“I never thought I was going to be a football player in a million years,” Ray acknowledged. “But putting those pads on and running out there with my team — it’s a brotherhood — just being able to do that was really awesome.”

Though he wasn’t “hired” to tackle anybody or get involved in the contact, it happened a few times including a touchdown-saving stop or two.

“It was scary at first,” he said of the contact. “My mom, of course, was like, ‘The kicker never has to tackle. He never gets hit.’ ‘Yeah, uh, that didn’t happen.’ I just did what I had to do in order to save it.”

It came down to Henderson and UCA,” he said. “Henderson’s was basically a full ride and UCA’s offer was good as well. It just really came down to whose college I could see myself more at. And it just turned out to be UCA.

“I just like the campus,” he continued. “UCA’s always been a top choice of mine ever since I started playing soccer, really. But I like the coaching staff there. They’re really awesome, really nice. And they’ll get stuff done. They’ll make me better as a kicker.”

Ray acknowledged the challenge, saying, “I just think that competition between me and him will definitely make me better and make him better and we’ll just get better together.”

“I think Hayden will end up being a very big cog with what he’s going to do in his career,” James said. “Like several of these guys, I think he has a chance to play even after college football. I think Hayden will be one of the top kickers in the country in college like he is in high school.”

Obvisously, Ray’s stats were impressive but it was another goal that he set for 2016 that have more to say about who he is.

“My other goal was raising 4,000 dollars for kids with cancer,” he acknowledged “I went to Kohl’s kicking camp (during the summer). One of the organizations they work with is Kick-It for Cancer. Basically, you make your own website and there’s a donate button and a pledge button. Donate, you donate some money. Pledge, you pledge a certain amount of money for each point scored by the kicker, PAT’s and field goals. I was able to get it. I put 4,000 down and I was able to get 4,075. I’ll take it. It was awesome.”

As for his education, Ray said, “I want to go into something medical, science type of things, like Forensic Science, Pathology, stuff like that, like SCI type of stuff because I think it sounds really interesting.”