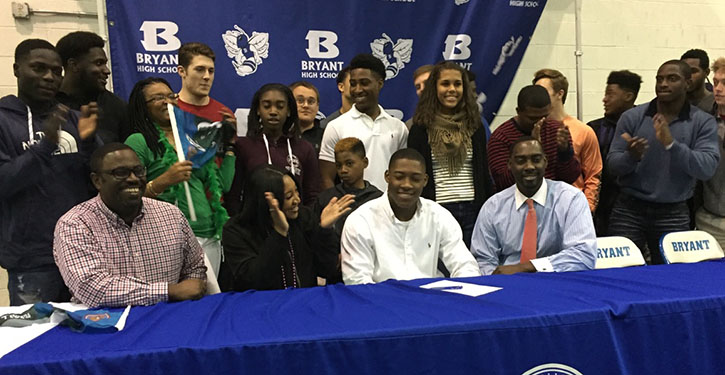 Bryant’s Moody set to ride the Green Wave at Tulane

Marvin Moody Jr., is an example.

In 2013, he was a terror for offenses as a defensive end on the Bryant Hornets freshman team. He refused to be blocked, made play after play and was one of the stars for the team that season.

A year later, as a sophomore on the high school team, Moody played mostly on the junior varsity team, hardly got any varsity time at all.

“I played some offense as a 10th grader as a receiver,” he recalled. “But midway through the season, they moved me to defense.”

“You get to hit people,” he said with a smile. “It’s your job to hit somebody.”

So back in a familiar role, Moody started to emerge as a junior and got more and more playing time at outside linebacker as the season rolled along. He wound up getting in on 67 tackles, tying for second on the team, including 9 stops for losses, a couple of special-teams tackles and two sacks. He developed a nose for the ball as he broke up a couple of passes and covered three fumbles.

It wasn’t a starring role but, obviously, the Hornets had hopes for his further development as a senior.

How good could he be?

Well, he wound up leading the team with 120 tackles including a team-high 14 for losses, three pass break-ups, a sack and two interceptions, one of which he returned for a touchdown. Against Little Rock Catholic, he blocked a punt and recovered it in the end zone for a TD.

He often made other teams run their offenses away from him.

In the end, he was named all-State and all-conference, was among the final three candidates for the Farm Bureau Insurance Awards for top defensive player in Class 7A/6A and has been chosen to play in the annual Arkansas High School Coaches Association All-Star football game.

And, to top it off, on Wednesday, Feb. 1, a night after he scored a season-high 9 points for the Bryant Hornets basketball team, Moody, the son of Marvin Moody Sr., Kim Glove and Ron Glover, signed an NCAA Division I National Letter of Intent to continue his academic and football career at Tulane University in New Orleans.

“From a coach’s standpoint, we’re going to miss Marvin,” said Hornets head football coach Buck James, who introduced him as Marvin “Bad Mood” Moody. “He’s a good student. He’s a good friend. He’s a good teammate. It was a pleasure having Marvin on our football team. He was one of our catalysts. He’s going to be hard to replace but we’re very excited for him.”

After the Hornets’ landmark 2016 season in which they reached the 7A State semifinals for the first time in the history of the program, James talked about the impatience of some players. How they want to come right in and start as sophomores. He emphasized the need for the hard work that allows a player to gradually develop and become a standout by the time they are seniors.

Though he noted that there were several seniors that had one just that, becoming major contributors as seniors, James pointed to Moody as Exhibit A.

“You can never give up,” Moody said when asked what he tells younger players. “It’s hard. You’ve got to put in the work with dedication and just never give up.

“I started playing football around the age of 4,” he continued. “I wasn’t always that good. I moved here in seventh grade and I still wasn’t that good. I started to sprout my junior year. Now I’m signing with Tulane, so I guess I got pretty good.”

“Because of the academic part,” Moody answered. “I think it’s real important to get your diploma because football’s going to end one day. They’ve got a good business program.”

He also had an offer from UCA.

“They also have a good business program but I went ahead and went with Tulane,” he explained. “I just had a good relationship with the coaches and I love the environment. I loved it. It’s an old and beautiful campus.”

As for the plans the Green Wave coaches had for him, Moody said, “They want me to come in as a starting outside linebacker. If I learn the defense, I will be playing a lot.”

In the meantime, he’ll continue to try to help the Hornets basketball team return to the State semifinals or get further.

“It has helped me a lot,” he mentioned. “Coming from basketball, I’m in shape already. I don’t have to do off-season. I’m ready.”