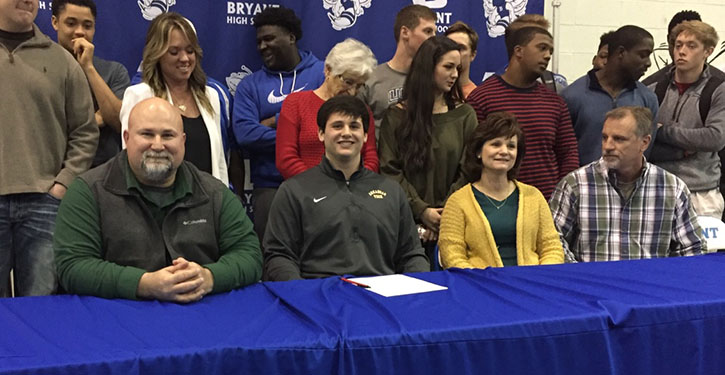 Coaches often talk about players “buying in” to what they’re trying to do, especially when there’s a change in the head coach and turnover in a coaching staff. It’s vital.

For a staff that’s trying to learn about their new team, it quickly becomes clear who your leaders are; who’s going to bear down when everyone’s yearning for relief; who’s going to be there when it gets tough, when the proverbial chips are down.

In spring 2016, the Bryant Hornets football got a new head coach in Buck James and an almost entirely revamped staff. Now, change is almost always difficult. And a lot of the Hornets struggled with the new approach. Some went so far as to walk away.

Others, though they may have had troubles, never gave in, never faltered. They dug down, stood up, and powered forward.

James quickly learned about Hayden Knowles. He was one of those guys. And because of Knowles and a few other seniors, the Hornets battled through a rugged pre-season, overcame a deeply disheartening scrimmage game at Pulaski Academy and a less-than-impressive 2-2 start to the season.

Because of Knowles and a those like him, the Hornets found their stride, reeled off seven wins in eight games and made Bryant football history, reaching the State semifinals for the first time.

“He’s about the only player we had that never missed a single practice, a single workout, a single game,” James related.

Indeed, Knowles has been the iron man of Bryant football, playing in every game of his three-year career, a record 36 games.

In that time, he played on the defensive line then, when injuries had gutted the linebacker corps his junior year in 2015, he moved to the middle to plug the gap. As a senior, he moved back to the line and earned all-State and all-conference honors plus an invitation to play in the annual Arkansas High School Coaches Association All-Star game in June.

And, on Wednesday, Feb. 1, all his hard work and leadership was awarded when Knowles, the son of Mark and Nicki Knowles, signed a National Letter of Intent to continue his academic and football career under scholarship at Arkansas Tech University in Russellville.

“It was hard at first but once we bought into Coach James’ program, it was just awesome,” said Knowles, whom James introduced as Hayden “The Hammer” Knowles, regarding his senior season. “We took leaps and bounds forward and it showed this year. We made it to the semifinals this year. I think State championships will be on the horizon.”

Knowles finished his senior season with 68 tackles and a team-high six sacks to go with nine tackles for losses.

As a sophomore, he was mainly asked to absorb blocks up front. Still, he got in on 28 tackles including four on special teams. He recovered two fumbles along the way.

As a junior, he got in on 65 stops, six for losses with a sack and a pass break-up.

Asked about playing linebacker or the d-line, Knowles said, “I do like my hand in the dirt just a little bit better. I like to get to hit everybody every play and I like getting after the quarterback.

“There’s been times it’s been difficult,” he said of changing from one position to another, “but I just love contributing to the team in any way they need me. I just love being a part of it, being a leader and getting to step up this year and anchoring the d-line.”

Knowles seemed to develop a knack for making plays at big moments.

“In the off-season,” he explained, “you focus on the little details and I think that’s what got me there to the big plays, just focusing on the small details.”

As for college, Knowles, who plans on majoring in Mechanical Engineering, had to make a decision.

“I was considering Ouachita and Harding,” he said. “Originally I was committed to Harding but I just felt like I was at home at Arkansas Tech. The coaches were wonderful. I really made connections with the coaches and the players there. They were awesome. And their facilities are top-notch.”

As for the recruiting process, Knowles added, “It’s been awesome. All the coaches have been wonderful. It was a little stressful towards the end but I feel like I made the right decision. I just love it at Arkansas Tech.”

He stated that, even at a young age, he took football seriously.

“It’s something I’ve grown up with,” he explained. “My dad, all my uncles, all played football. I just really love it. I’ve always had that dream of playing college football.”

Bryant’s Moody set to ride the Green Wave at Tulane
Bryant’s Minnesota surprise, Campbell will be a Razorback