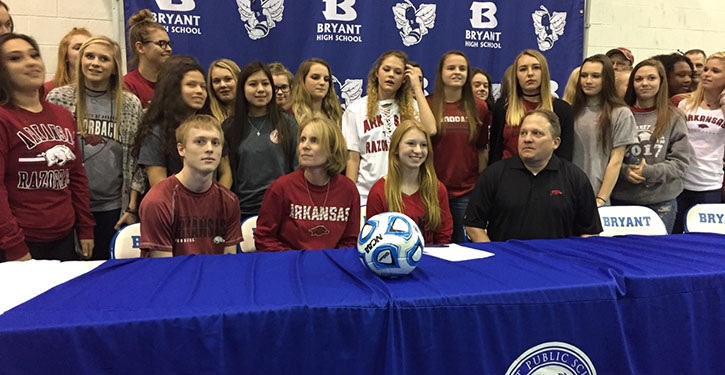 Bryant’s Minnesota surprise, Campbell will be a Razorback

Coach Julie Long, who put the Bryant girls soccer program on the map before taking a job as an assistant principal at the high school after last season, already had an impressive team assembled to start the 2014 season. She probably wasn’t looking for any additional help but she kept hearing from a dad, who was moving his family including his soccer-playing daughter to Bryant from Minnesota.

Long takes the story from there:

“He wore me out, telling me she was coming and emailing me and everything. And he never led on like she was going to be some hot, star player. He pretty much was just like, ‘Hey, my daughter’s coming. I don’t want her to miss tryouts.’ So I was like, ‘Okay.’ You know, every coach knows that if they get a parent emailing them a lot, it’s probably not good news.

“Then, from my first impression — she’s all of about 5’4” standing there. I was like, ‘Great. This kid’s coming in here. She’s going to be a bunch of nothing.’”

But then Caroline Campbell stepped on the practice field.

“In about the first minute of watching her play,” Long said, “I knew Caroline was going to be something special. I had no doubt.”

Even then, the coach may not have realized how special.

About to start her senior season, it is probably safe to say that Campbell is the best soccer player in Lady Hornets’ history.

She has led the Lady Hornets in scoring all three seasons and has been named all-State each of those years. A member of the U.S. Youth Soccer Region III Olympic Development program team, she was named MVP of the Fort Smith Tournament in 2014 and 2015 and to the all-State Tournament team in 2015. In three seasons, she has accumulated 106 goals and 36 assists for the Lady Hornets. She had 24 goals and 12 assists as a junior.

And, after the 2016 season, she was named all-Regional by the National Soccer Coaches Association of American and was chosen as the Arkansas Gatorade Player of the Year.

“Basically, the best player in the state of Arkansas for 2016,” Long stated.

“in the past three years, she and the other three 2017 seniors set a record of 64-4-3,” she added. “They’ve lost four games in the last three years that the four of them have played. Caroline has helped lead this team to one State semifinal in 2016, a runner-up team in 2014 and the State championship in 2015.”

No surprise then that, on Wednesday, Feb. 1, Campbell, the daughter of Greg and Heidi Campbell, signed an NCAA Division I Letter of Intent to continue her academic and athletic career at the University of Arkansas in Fayetteville.

“I knew that this day was coming from pretty much the first day that she got here in ninth grade,” Long declared. “I think this is huge for the Bryant soccer program and I hope that it inspires some of the younger ones to go on and have the same kind of aspirations.”

Said Campbell, an AP Scholar with Distinction and National Merit commended, “I looked at other schools in state and out of state but right away I figured out the University of Arkansas was where I wanted to go. So, Wooo Pig!

“Academics is really important to me so I wanted to make sure I’d get the right major and I picked my school from there,” she added. “The University of Arkansas definitely fits.”

Campbell is considering a study of Chemical Engineering.

“I went and I enjoyed the campus and the coach was really nice,” she said. “Everything just seemed to work out.”

“To get the Arkansas Player of the Year is important for us,” said Arkansas coach Colby Hale. “Caroline has a tremendous work ethic, good speed and a goal scorer’s nose. She is fearless and confident and represents everything we want to be about. She is even better as the level of play rises and we are glad she is staying home to play for the Razorbacks.”

“Caroline has a great touch on the ball which enables her to attack both with her back to the goal and off the dribble running at defenders,” said Arkansas United Girls Green coach Jeff Trimble. “Her high skill level, combined with her exceptional quickness and speed make her extremely dangerous. Her best attribute is her attitude and respect for her teammates. It has been a joy to watch her play as well as coach her.”

“I think I started when I was 3,” Campbell said. “I played on my brother’s team. I’ve played soccer ever since. I’ve always been really competitive. When I moved here ninth grade year, it became really serious.”

She admits to a bit of culture shock.

“But southern hospitality has been really nice,” she added.

“I’ve learned so much,” Campbell said of her career at Bryant so far. “I’ve learned how to be a leader and how to follow others. I’ve learned a lot from all the coaches I’ve had.”

As for the team’s success, she said, “I think, for the team and myself, it’s been hard work and pushing ourselves and having our coach push us to new levels.”

When did she develop her knack for scoring?

“I have no idea,” she asserted. “We didn’t even know I had it. It was a nice little surprise.”

“If I can use one word to describe her playing style, it would be ‘feisty’, Long said. “She just makes other teams wreak havoc all over the field. She is just feisty. And, as a forward, that’s one thing that you want. I can say, as a coach, you want somebody that’s going to cause a team’s defense — they hate her. They just hate her. I mean, all over the state. She’s probably the most hated player.”

Havoc will do that.

“I believe that she is truly that kind of player,” Long continued. “The University of Arkansas is getting a complete player. It’s been an honor to coach her for the past three years and I’m glad that Coach (James) Paul gets that honor as well.”

Paul takes over for Long as the Lady Hornets head coach this season. Workouts are underway in preparation for the 2017 season.

“The little bit that I know about Caroline is that she comes to work every day,” Paul said. “If you know me at all, I like to get out there and go to work as well. But I can’t hang. She’s too good. If that says anything to what the Razorbacks are about to have — they had a great season this year — I know it’s just going to get better with her.”