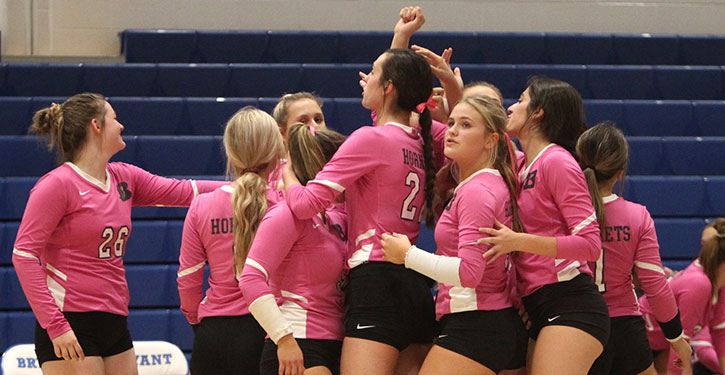 The Bryant Lady Hornets volleyball team turned a corner last Saturday when they won the Silver Division of the Hot Springs Lakeside tournament. And it was further evidence when, on Tuesday, they won the first two sets of their 6A-Central Conference match with the Fort Smith Northside Lady Bears at the Hornets’ Nest.

But they faltered a bit and the Lady Bears won the third and fourth sets to even the match. In a nip-and-tuck fifth set — their first of the season — Bryant led 11-10 on an ace served up by Alyssa Hernandez and, later, tied at 12 on a kill by Ella Reynolds. But the Lady Bears wound up pulling out the victory, 15-13, delivering a gut-wrenching loss to the Lady Hornets.

The pain, however, was tempered with the improved play.

“There was a change on Saturday,” allowed Lady Hornets head coach Leigh Ann Back. “There was a glimpse that they actually kind of believed in themselves and that they could actually do some things.

“I think we had some glimpses of the old team tonight that did us in,” she added. “They did a lot of fighting. I was very proud of them for the fighting but, at some point in time, they’ve just got to decide that they’re going to finish something.”

The Lady Hornets were without junior Sam Still. But the front row players, particularly Madelyn Hoskins, Truli Bates, Sammie Jo Ferguson and Reynolds appeared to be attacking more forcefully, at times, hammering the ball like they hadn’t in the past.

Back said that was, in large part, due to the setting.

“Unfortunately, one of my setters was sick and my brand new setter had to set six rotations on Saturday, so they got a lot of connections with her,” the coach related. “We are getting better with our connections with our setters. Sam Still is out with a concussion right now so she’s going through protocols. But, you know, it’s adjusting to the changes we’ve made then adjusting to being able to play bigger and better.”

The Lady Hornets were every bit bigger and better to start the match, reeling off the first six points. Bates had a kill and Hernandez served up a pair of aces. Northside got a side-out, but Bryant got it right back on another kill by Bates. Olivia McCallister had a dink, and Bates scored of a block and it was 9-1.

Hoskins had two more kills, Ferguson knocked one down and Olivia German served up an ace to make it 13-3.

But after Ferguson’s kill to make it 16-6, the Lady Bears came to life and rallied. They eventually tied it 24-24. At 25-25, Ferguson made a block then a hitting error by Northside decided the set.

The second set was tight early. Bryant led 10-9 then on kills by Reynolds and McCallister, the Lady Hornets produced a little breathing room. A hitting error cost them control but Northside returned the favor and Reynolds served up three aces to push the lead to 18-10. Kills by Ferguson and Hoskins helped close out the 25-14 win.

The third set didn’t start out well for the Lady Hornets as the determined Lady Bears pushed out to a 10-2 lead that eventually grew to 20-6. Down the stretch, Bryant cut into the margin. Hoskins, Ferguson and Reynolds had kills and Jaiyah Jackson served up an ace. They whittled the lead down to 23-16 before the Lady Bears closed it out, 24-17.

The fourth set started with another early run by Northside. It was 7-1 then 10-2. It was 17-6 when Bryant started to kick it in. Hernandez fueled the rally with an ace then Bates and Reynolds had consecutive kills. Errors by the Lady Bears helped trim the margin to 17-13.

Neither team led by more than two along the way. Bryant managed that three times. After it was 3-3, Bates got a dink and Hoskins a kill to make it 5-3. After Northside scored, Ferguson’s kill made it 6-4. After it was tied 6-6, kills by Hoskins and Reynolds made it 8-6.

Statistically for Bryant, Reynolds and Hoskins each had 12 kills. Ferguson added 11 and Bates eight. Hernandez had 32 assists and Shaylee Carver 14.

Reynolds served up six aces and Hernandez four. Defensively, Jackson came up with 38 digs. Hernandez had 20, Reynolds 12 and Hoskins 10.