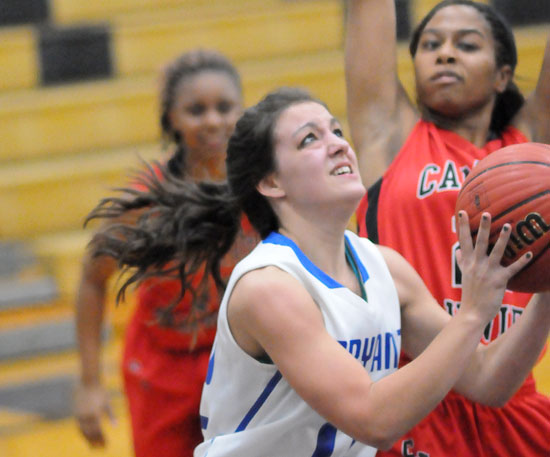 NORTH LITTLE ROCK — It’s really easy to root for Bryant Lady Hornets senior Aubree Allen after all she’s been through. Knee injuries have plagued her, forcing her to miss her entire junior season. She wears an industrial strength brace on that knee now and had a bit of a scare in the Lady Hornets pre-season game against Vilonia.

Peyton Weaver (14) moves to get into position for a rebound as teammate Aubree Allen (23) launches a 3-pointer. (Photo by Kevin Nagle)

But it was nothing serious, thankfully, and, on Thursday night against the Camden Fairview Lady Cardinals, Allen poured in 25 points to lead the Lady Hornets to a 65-45 win in the first (and only, as it turns out) game of the OrthoArkansas/Baptist Health Invitational Tournament at Central Arkansas Christian Academy.

“Aubree, she can score,” acknowledged Lady Hornets coach Brad Matthews. “I told Coach (Trina) Williams in the third quarter, we’ve got to get her the ball more. She hasn’t shot in a while. I didn’t realize she had 25 but she can finish.

“And I thought Erica rebounded better,” he added. “She was a presence in the third quarter. Sometimes I don’t think she expects herself to do a lot but we’ve got to have her do a lot.”

Fairview held the upper hand through much of the first quarter. It was 9-5 when Allen got a stickback and was fouled. She missed on the free throw but, moments later, Baxter hustled after an offensive rebound and fed Weaver, who drained a 3 to put the Lady Hornets ahead for the first time.

They never relinquished the lead and eventually built a 24-point advantage.

“It was a little sluggish start there but we’re trying to do some things defensively that we didn’t do against Mount,” Matthews said, referring to the team’s season-opening win over the Mount St. Mary Belles of Little Rock. “I thought we took a few possessions to adjust. We’ve got to continue to work on containing the ball. I thought we got beat off the dribble a little bit. And we didn’t rebound very well in spurts. But those are things that every team’s going to need to get better at all year regardless of the level — high school, college, whatever.

“We were able to get out in transition again,” he noted. “They were pressing and I thought, for the first time that we’ve seen a press this year, we handled it fairly well. Anytime somebody presses that much, you’re going to have a few turnovers but I thought, for the most part, we handled it pretty well. I thought we executed, passed the ball well against the press, especially in the first half and the third quarter a little bit. We got some shots in transition, got to the rim. 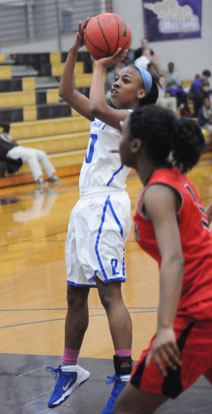 Bryant’s Jakeria Otey pulls up for a jumper in the lane. (Photo by Kevin Nagle)

“We put up 65 points and that’s a good night,” the coach said. “It was a good win. We saw something completely different tonight and that’s what you need as you prepare for conference.

Allen fed Baxter for a short jumper with 1:20 left in the first quarter. Baxter then made a steal and Weaver fed Allen who was fouled with :59 showing. She converted once and it was 13-9 going into the second period.

Otey’s driving layup to open the second stanza was followed up by a steal for Weaver. Otey got the ball back and drove then kicked out to Baxter who nailed a triple. And when Baxter made another steal and fed Allen for a 10-footer, the Lady Hornets had their first double-digit lead at 20-9.

Otey added a free throw then swiped the ball and fed Anderson for a layup. After a couple of Fairview misses, Anderson hit a running jumper. Allen swiped a pass that led to a layup by Otey and a timeout for Fairview.

Still, before the Lady Cardinals could snap their dryspell, Otey, Anderson and Allen added free throws to make it 30-9.

When Fairview’s Nyosha Moore hit a 15-footer with 2:02 left in the half, it was her team’s first points since Alaina Pace’s bank shot made it 9-5 with 3:10 left in the first. Moore’s hoop ended a 25-0 run for the Lady Hornets.

Bryant led 33-16 at the half. Fairview cut the margin to 15 a couple of times early in the third but could never get any closer. The last time it was 15 (39-24), Anderson  fed Allen for baskets on three straight possessions.

It was 50-32 going into the fourth quarter and a basket by Smith on a nice lob feed into the post from Baxter started a brief run for the Lady Hornets. Otey hit a free throw, Smith rebounded a Fairview miss and Anderson cashed in with a drive to the rack to produce the largest lead of the game, 55-32 just over a minute into the final period.

Free throws by Anderson and Allen helped preserve the large lead and, in the final two minutes of the game, Allen’s final bucket, off another assist from Baxter, and Miller’s jump hook pushed the margin to its apex 65-41.

With the rest of the tournament cancelled due to the threat of icy conditions, the Lady Hornets will return to action on Monday at 5:30 p.m., against Watson Chapel in the opener of a tournament in Cabot.