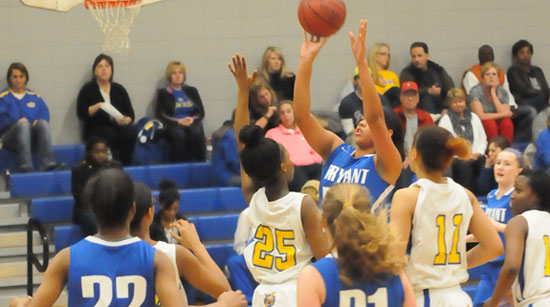 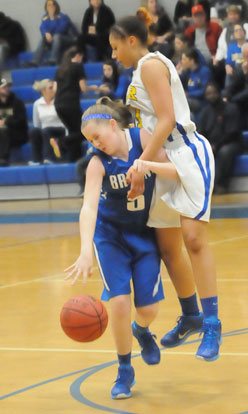 Maddie Miller (5) tries to retain possession of the ball as she’s clobbered by a North Little Rock defender. (Photo by Kevin Nagle)

NORTH LITTLE ROCK — There’s just no way to simulate in practice what a team is going to face when they come up against the North Little Rock Lady Charging Wildcats. Deep, quick, physical and very aggressive, they come at you in waves and never relent.

On Thursday night at Lakewood Junior High, the Bryant Lady Hornets freshman team got another taste of all that and came away battered, bruised and defeated 48-24. It was a rugged game with about every third foul getting called.

The Lady Cats forced Bryant into 27 turnovers and out-rebounded the Lady Hornets 19-16 including 11 offensive boards.

They took control with a 13-0 run in the first quarter, added an 8-0 burst in the second and outscored the Lady Hornets 9-2 in the fourth quarter with both of Bryant’s points coming on free throws.

North Little Rock was still pressing at the end, going 11 deep without much drop-off with the exception of guard Demyta Brown who scored 17 points.

Bryant was paced by Paige Adams’ 12 points. Raven Loveless had 7, all in the third quarter.

Stephanie Cullen finished with 2 points, scoring Bryant’s first basket to tie the game. But North Little Rock put together their first run and the Lady Hornets were unable to score again until Adams converted two free throws with 1:05 left in the opening period. Maddie Miller hit a 12-foot jumper to make it 15-6 but North Little Rock beat the buzzer to take an 11-point lead into the second quarter. 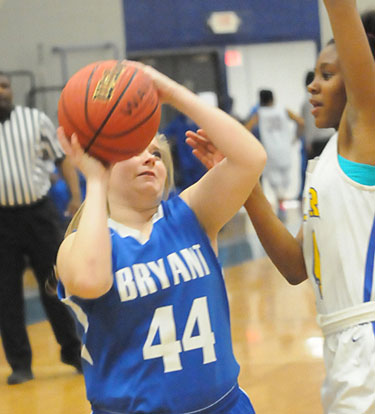 Stephanie Cullen (44) tries to find room for a shot. (Photo by Kevin Nagle)

Loveless scored inside to start the second half to cut the margin to 14 but that was as close as the Lady Hornets would get the rest of the game.

North Little Rock led 39-22 at the end of the third quarter. And by scoring the first 7 points of the fourth quarter, the Lady Cats built their largest lead at 46-22.

The Lady Hornets host conference co-leader Conway Blue on Monday, Feb. 2, then have a series of games against teams they’re fighting against for a spot in the Central Arkansas Junior High Conference post-season tournament. 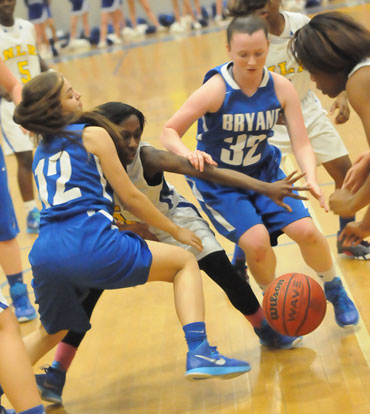