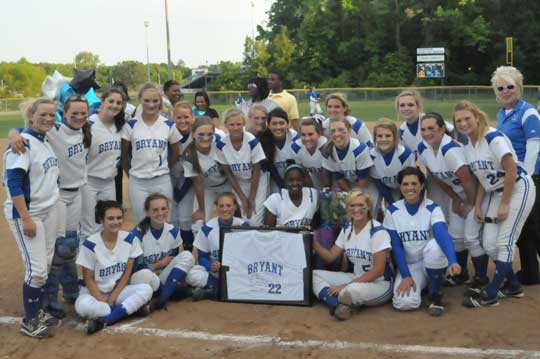 The best two teams in Class 7A in 2009 may be the best in 2010. They certainly turned out to be the top two in the 7A-Central Conference. And, while North Little Rock won the State title game last spring, the Lady Hornets won the league crown in 2010 with a 4-1 win in the decisive showdown on the final night of the regular-season Monday.[more] 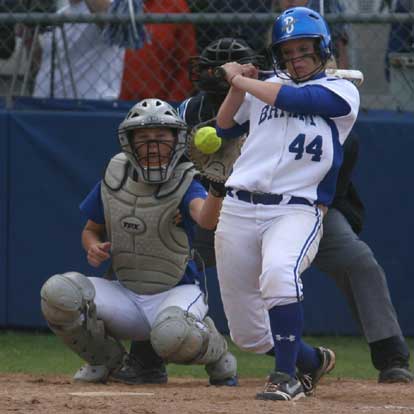 Bryant, which improved to 22-2 overall, will be the league’s top seed in this year’s State tourney in Cabot. The Lady Hornets will play at noon on Saturday, May 15, against the winner of a first-round game on Friday between the fourth seeded team from the 7A-West (which could still be one of four teams) and the fifth-seeded team from the Central (either Conway or Van Buren).

North Little Rock dropped to 25-3 and, as the league’s second seeded team, will play Saturday at 1:45 against the winner of the first round game between Fayetteville and either Conway or Van Buren). 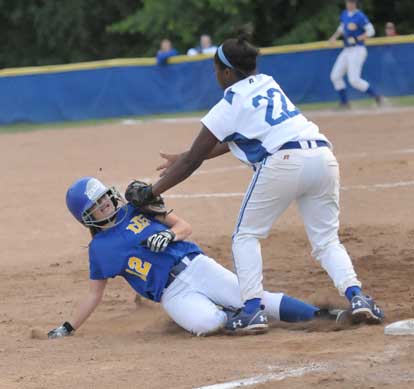 The game was as tight as you’d expect of a championship tilt. It was tied 1-1 until Bryant erupted for three runs in the bottom of the fifth. North Little Rock put together a seventh-inning threat but could not break through as Bryant pitcher Peyton Jenkins waded through the middle of the Lady Cats’ batting order forcing them to strand two. 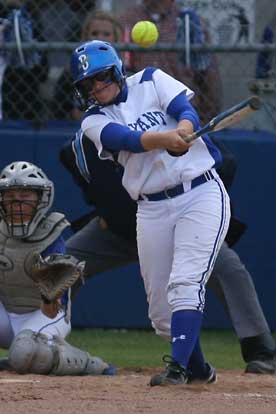 On Monday, Bryant’s game-turning fifth didn’t get revved up until two were out. Jenna Bruick drew a walk to extend the frame then Cassidy Wilson cracked a single. Jenkins followed with a shot that went for a two-run double that snapped the 1-1 deadlock. After Jessie Taylor drew a walk, Jenkins got to third and scored on a wild pitch to make it 4-1.

Jenkins pitched in and out of trouble much of the game. Her only 1-2-3 inning was in the sixth and it needed a doubleplay to make it happen then. The Lady Hornets turned a nifty one.

“It was awesome,” Stepp asserted. “We threw it to first and the girl tried to go to third and we threw her out at third. It was amazing.”

In the seventh, Taylor, the Bryant catcher, made a nice play to pounce on a bunt by the Lady Wildcats’ speedy lead-off hitter Tiffany Roby, gunning her down at first.

That proved to be huge when Hannah Escovedo and Molly Edwards followed with solid singles to bring up clean-up hitter Callie Simmons. Jenkins got her to fly out, bringing up Allie Seaton. 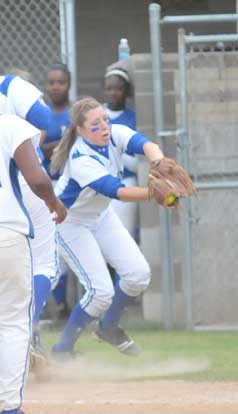 “I called timeout and went and talked to Peyton and the infield,” Stepp recounted. “I said, ‘Peyton, we cannot let one player beat us.’ I said, ‘These two runs don’t matter but the one at the plate matters. So, we don’t just throw her anything that she could drive. So, Peyton looked at Jessie and said, ‘I want to throw a screwball then I’m going to throw a 3-2-5 and then I’m going to throw a change-up outside.

“All it took was the screwball,” Stepp stated. “She popped up and we got her out.”

“Peyton is really working hard and doing her job,” the coach asserted. “I’m so proud of her — really, really proud.”

The Lady Hornets, who stranded 11 at North Little Rock, had six hits and stranded just four this time.

The Lady Charging Wildcats got their lone run in the second. When Seaton singled, was sacrificed to second and scored on a single by Autumn Schweiger.

Bryant had threatened in the first when Bruick led off with a shot that went for a double. But she was thrown out trying to advance to third on the play.

“I’ll take blame for that,” Stepp said. “That was my fault. But you try to be aggressive. I started to have come on to third then tried to stop her but she came on and they threw her out.”

Simmons, the North Little Rock starting pitcher who hadn’t pitched recently because of a sore shoulder, held Bryant scoreless until the fourth. With one out, Taylor singled and Kayla Sory drilled a shot down the line in left for an RBI double.

“She was throwing some heat,” Stepp said of Simmons.

Seaton relieved but ran into the fifth-inning trouble. 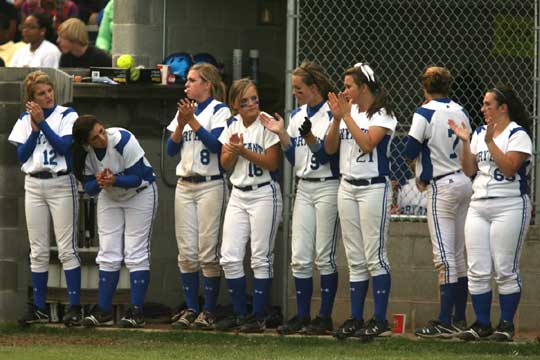