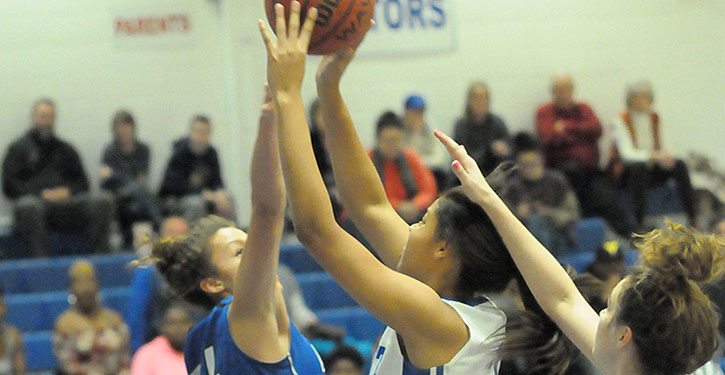 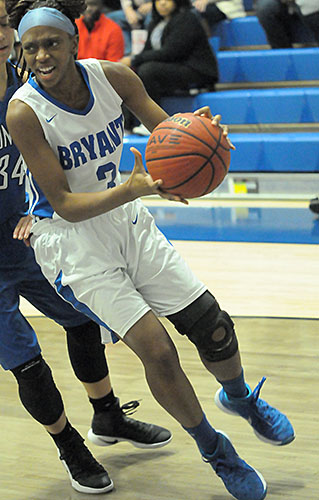 Lania Ratliff tries to drive around a Conway defender. (Photo by Kevin Nagle)

If the Bryant Lady Hornets can continue to play as well as they did for the first three quarters against the Conway Lady Wampus Cats, who came into Friday night’s 7A-Central Conference game with a 16-5 record, they could win some games in the second half of the league schedule and make a bid to reach the Class 7A State Tournament.

Conway, in the thick of the race for a league title, trailed the Lady Hornets for the entire second quarter and most of the third. The Lady Cats managed to surge for a 35-34 lead going into the final stanza then exploded with a 28-point quarter to escape with a 63-44 victory.

“We had two good days of prep, Wednesday and Thursday, getting ready for that 1-3-1 (zone press) and I thought it showed,” he said. “I thought we executed pretty well. Especially that first half, we played well as a group. Whoever was out there was fighting and clawing and scrapping, and that’s how we’ve got to play to be successful.

“I don’t know if we wore down mentally or wore down physically,” the coach related. “Conway got hot there and it kind of collapsed on us a little bit. You know, Conway’s a State championship-style team, so much talent and athleticism and size. They really don’t have a lot of weaknesses.” 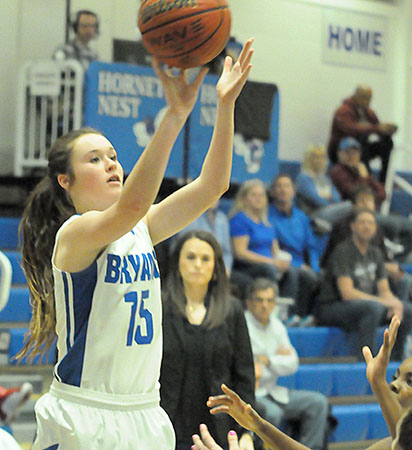 Bryant’s initial lead was 4-2. After Conway got on the board first, Allison Steen tied it with a short jumper. An offensive foul cost the Lady Cats when Williams scored off a nice feed from Lania Ratliff.

A three-point play by Maggie Evans put Conway back ahead but Bryant wouldn’t go away. Down 8-4, the Lady Hornets’ Raven Loveless made a steal. Kalia Walker fed Kendal Rogers who scored and was fouled. Though she missed the resulting free throw, Steen grabbed the carom and tossed out to Mary Catherine Selig, who drained a 15-footer, tying it up.

Higgins hit a free throw to snap the deadlock but, with :07 left in the quarter, Walker fed Ratliff for a layup behind the Conway press and Bryant held a 10-9 lead.

To start the second period, Rogers drove and kicked to Selig, who popped a 12-footer to increase the lead. When Evans missed two free throws, her teammate Brianna Wells rebounded only to have the Lady Hornets force a held ball. It was Bryant’s turn for the possession and, with it, Walker drained a 3 to push the Lady Hornets’ advantage to 15-9.

Conway came up short on two subsequent possessions and, with 5:20 left in the half, Loveless, following her own miss, scored and was fouled. When she completed the three-point play, the Lady Hornets had doubled up the Lady Cats, 18-9. 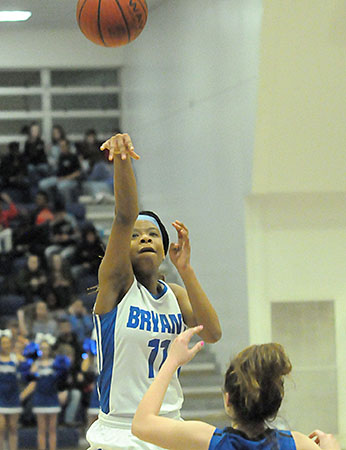 Allison Steen follows through on a mid-range jumper. (Photo by Kevin Nagle)

Selig made a steal but Bryant was unable to take advantage. It was the first of three possessions for the Lady Hornets in which they were unable to tack on.

Conway’s Fu’tra Banks, who came off the bench to score a game-high 21 points, trimmed a free throw off the margin on a disputed charge-block call as Rogers tried to absorb a charge.

Following a Bryant turnover, Savannah Lowe converted two free throws to cut the margin to 4. She followed up with a 3, her first make after seven failed attempts.

With the lead down to 1, the Lady Hornets responded. Loveless had a shot blocked but Rogers scrambled for the loose ball and was fouled. She converted twice. Moments later, Loveless followed her miss to score on the second try, making it 22-17.

Ratliff took a charge on a drive by Wells to give Bryant a chance to push the advantage further but Walker’s 3-point try rimmed out. The Lady Hornets forced a turnover only to turn it back over themselves with :14.2 left in the half.

Hoping to go for the last shot, Conway never got an open look as time ran out with the Lady Hornets enjoying a 5-point lead at the intermission.

The teams traded baskets to start the third quarter. Both of Bryant’s buckets were layups by Ratliff off feeds from Steen at the high post as the Lady Hornets’ burned the Conway press.

It was 26-21 with 5:13 left in the quarter. After a missed jumper that would’ve added to the margin, Conway scored twice off the offensive boards to make it a one-point difference.

The Lady Cats finished with 41 rebounds in the game, 20 of them on the offensive end. A lot of those came in the first half when there were a lot to be had as Conway hit just 5 of 24 shots (a 21-percent clip).

Walker canned a baseline jumper to keep Bryant ahead. Banks banked one in then the Lady Hornets had two chances to answer only to turn it over twice. Banks hit a layup and Conway had it s first lead since the first quarter, 29-28.

Loveless tied it at the line but a 3-pointer by Myia Yelder, just into the game for the first time, put Conway back on top.

Bryant’s Riley Hill, however, answered with a triple to knot it at 32. Banks scored inside then added a free throw but when Walker was fouled with just over a second left in the quarter, her free throws had Conway clinging to a 35-34 lead.

Walker broke the ice for Bryant with two free throws with 4:53 left but Eryka Lewis drilled a 3. Rogers converted two free throws but Conway scored the next 6 points to make it 54-38.

Rogers added a free throw and so did Williams but the Lady Hornets just couldn’t whittle the margin inside of 10 again.

Threes by Lowe and Lewis helped extend the margin to 21 before Walker, who led Bryant with 11 points, scored in the final seconds.

“When you play Conway, you’ve got to keep them out of transition, you’ve got to keep them off the boards,” noted Matthews. “For the most part, that first two-and-a-half, three quarters, we did that. Then they hit a 3 and we got a little slow in rotations and we got a little slow closing out. And they made us pay for some stuff, not getting back. That’s a tribute to them. That’s what they do well. But we’ll take that and learn from it and get ready for next week.”

The Lady Hornets host Fort Smith Northside on Tuesday then, in a make-up game, they’ll travel to Northside on Friday.