Lana Naumann’s long hard road back from a serious knee injury appears to be just about complete. 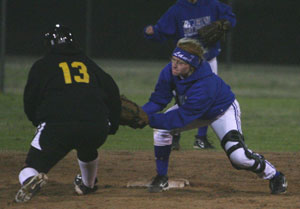 Starting at second base for the Bryant Lady Hornets in their 7A-Central Conference opener against the Little Rock Central Lady Tigers on Tuesday, March 3, Naumann made the plays in the field and contributed to the offense with three runs batted in on a walk, a triple and a groundout to help her team post a 13-0 win in five innings.

Bryant improves to 2-2 overall going into an

other home conference contest against Van Buren on Tuesday, March 10. (The Lady Hornets were supposed to play Mount St. Mary’s on Thursday, March 5, but the game was moved to April 7, turning that date into a double-header meeting at Bryant.

The Lady Hornets used seven hits to take advantage of five errors and six walks in the win over Central while senior Christen Kirchner held the Lady Tigers without a hit, fanning eight, walking one and hitting a batter.

Naumann, who missed most of the 2008 season after suffering her injury early on, highlighted the game-busting seven-run second inning with a two-run triple to deep right field.[more]

Bryant had staked out a 5-0 lead in the first when Paige Turpin singled, took second on a wild pitch and stole third, scoring when the throw from the catcher to third was wild. Kim Wilson reached second on an error, took third on Kirchner’s fiy to center and scored on another wild pitch.

A walk to Peyton Jenkins got things rolling again. Pinch-runner Kelsie Works advanced around to third on wild deliveries then scored on Sarah Hart’s grounder to second. 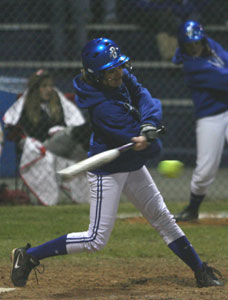 Jessie Taylor singled and scored all the way from first when Kayla Sory’s hit to left was misplayed and the Lady Tigers made two throwing errors. Sory circled the bases and scored right behind Taylor to make it 5-0.

In the second, Turpin walked and Wilson beat out an infield hit, taking second on an errant throw from first to third where Turpin was sliding in. The throw allowed her to score. With Wilson at third, Kirchner got a great bunt down that drew a late throw to the plate as Turpin scored. Kirchner hustled to second on the play and beat the return throw. A pair of wild pitches followed as Jenkins walked an the lead was 7-0.

Jenkins advanced to second on a passed ball then scored on Hart’s solid single to center. Hart hustled into second when the Lady Tigers failed to hold her at first on the play. She advanc 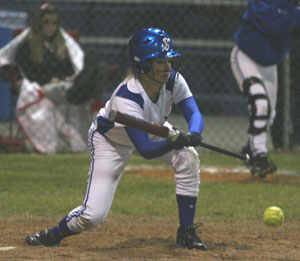 ed on a passed ball and, after Sory walked and stole second, Naumann cracked an 0-2 delivery to right for her triple. She scored too moments later on a sacrifice bunt by Cassidy Wilson.

Meanwhile, Kirchner’s string of six retired in a row to start the contest, came to and end when Nakie Lee reached on an errant throw to first on her grounder. She advanced to second on a wild pitch but remained there after Kirchner struck out the next two batters. With Audry Lloyd at the plate, ahead in the count 2-1, Lee was caught between second and third and was eventually tagged out by Naumann to end the inning and the threat.

Central pitcher Kayla Patton settled down after the rough first two frames, retiring the side in order in the third. But the Lady Hornets tacked on an run in the home fourth. Hart walked and was forced at second on a grounder to short by Taylor. Sory’s bloop single to right sent Taylor to third and she scored from there when Naumann bounced out to short.

A hit batsman and an error gave Central a chance to crack the goose egg on the scoreboard but Kircher got Lacy Taggart to tap back to the mound for a force at third. Kirchner followed up with a strikeout of Whiteny Parks to end the game.