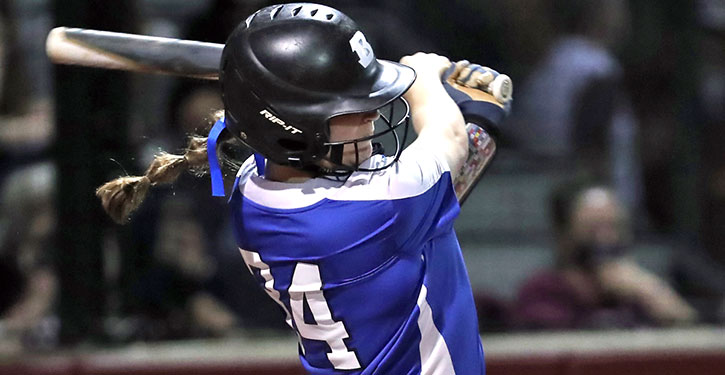 The Bryant Lady Hornets won their way to the championship of the Gold Division at the South Central Shootout held at Bishop Park on Saturday. In the final, however, Baptist Prep quieted the Lady Hornets’ bats and finished the tournament undefeated with a 2-1 win.

To get to the finals, Bryant piled up a 15-0 win over Poyen’s Lady Indians and followed up with a 6-4 win in bracket play over 6A-Central Conference rival Conway.

Bryant is now 8-3 on the season. The Lady Hornets’ next game will be Tuesday, March 30, at Little Rock Central.

In a pitcher’s duel, Baptist Prep’s Mackenzie Childers held the Lady Hornets to three hits while walking one and striking out nine.

Bryant’s pitchers, Leah Hicks and Christine Mefford only allowed three hits between them. Neither of them walked anyone, though Hicks hit a batter.

Taylor Bornds broke up the double shutout when she led off the bottom of the second inning with a solo homer to left.

Baptist Prep had threatened in the bottom of the first when Childers doubled with one out. When Maci Henderson hit a fly to Caitlin LaCerra in left, Childers tagged and came to third but, the Lady Hornets threw to second to appeal the play and Childers was ruled out for leaving the base too soon.

Childers pitched around a single and a stolen base by LaCerra in the top of the first. In the top of the third, Alissa Suarez cracked a two-out double to right, but she was stranded as well.

Hicks hit Ellie Bennett with a pitch to start the bottom of the third but struck out the next two and got out of the inning with a grounder to Bella Herring at short.

With two down in the top of the fourth, Emma Bonvillain and Herring each walked but Childers worked out the jam inducing a grounder to short that resulted in a force at third.

With Mefford relieving for Bryant in the bottom of the fourth, Childers beat out an infield hit, and Henderson reached on an error. Bornds fly to center allowed Childers to tag and got to third. This time, she did not leave too soon.

Childers and Henderson worked a double steal and though Henderson was tagged out at second, Childers scored to make it 2-0.

The Lady Hornets got on the board in the top of the fifth. Macy Hoskins walked and, with one out, Suarez got a bunt down that was misplayed into a two-base error that allowed Hoskins to score from first.

With Suarez at second, representing the tying run, Childers wriggled off the hook as LaCerra grounded to third and Abby Gentry flew to left.

A pair of errors in the bottom of the fifth put runners on first and third again for Baptist Prep. Once more, they tried to steal a run but, this time, Herring cut off the throw to second and fired back home to Buddha Dillon for the out.

Mefford got a strikeout to end the threat.

In the top of the sixth, Bonvillain lashed a one-out single to left. Herring sacrificed her to second with two away, Mefford’s grounder to short was misplayed, but Bonvillain could only get to third.

A strikeout ended the contest.

In a seesaw battle, the Lady Hornets overcame a 4-3 deficit with three runs in the bottom of the fifth then Mefford pitched around a two-out double in the top of the sixth to nail down the victory.

Suarez had two of Bryant’s eight hits including a double.

The Lady Hornets’ game-turning uprising in the fifth started with the Suarez double. LaCerra beat out a bunt single then so did Gentry as Suarez and LaCerra, who had swiped second, scored to give Bryant the lead.

Gentry stole second and, with one out, Herring sacrificed her to third. Bonvillain’s singled up the middle made it 6-4.

Bryant took a 3-0 lead in the bottom of the second. Dillon led off with a double and, with one out, Bonvillain sacrificed her to third. Mefford hit a pop behind second base that fell in for an RBI single.

After Mefford stole second, Hoskins lined a single to left that drove in Mefford. On the late throw to the plate, Hoskins hustled to second.

Conway cut the lead to 3-2 in the top of the third. Sofia King reached on an error and stole second. Mefford and the Bryant defense retired the next two batters. A strike away from shutting down the inning, Mefford and Sydney Weiser battled before a walk was issued.

Again, Bryant appeared to be out of the inning when Kaitlyn Erickson hit a grounder to second, but the ball was misplayed, and a run scored. That set the stage for Katelyn Conrad who drilled the very next pitch for an RBI single.

Mefford struck out Aly Hall to keep it a one-run lead.

But Erickson pitched around a one-out walk to Dillon in the bottom of the third and Conway resumed its offensive burst in the top of the fourth.

Akyiah Buntin lined a single to left then King reached on an error. After a double steal, Allie McMillen singled in both runs.

Twice, the Lady Hornets forced runners at third then Erickson bounced out to Suarez at second to keep Conway from adding to the lead.

The Lady Hornets hammered out 13 hits including a pair of doubles by Herring and a pair of triples by Suarez. Dillon had a double and a triple. Gentry and Nichols each doubled as well. Herring knocked in three runs.

One of Poyen’s hits, a single, led off the game but, with one out, the Lady Hornets got a doubleplay on a liner to Suarez at second.

Hicks pitched around a pair of two-out walks in the top of the second.

After stranding runners at second and third in the first, the Lady Hornets broke out on top with a pair of tallies in the bottom of the second.

With one out, Marissa Bracey was struck by a pitch. She stole second and scored when Hicks’ grounder to short was misplayed.

With Bailey Glenn in to run for Hicks, she stole second then scored when Nichols’ tapper back to the pitcher drew an errant throw. Nichols tried to get to second but was thrown out.

In the bottom of the third, the Lady Hornets blew the game up with six runs. LaCerra singled, Gentry doubled, and Dillon chased both home with a triple. Herring double to make it 5-0 and, after she stole third Bonvillain got her home with a sacrifice fly.

Bracey got the ball rolling again with a single to left and though she was thrown out trying to steal, Hicks drew a walk. Glenn came on to run again and swiped second to set up Nichols’ RBI double.

Suarez made it 8-0 with her triple on a drive to left.

Poyen managed a hit and a walk with one out in the top of the fourth but Hicks got a strikeout then a comebacker to preserve the shutout.

Gentry singled to open the bottom of the fourth. Dillon and Herring slugged back-to-back doubles to make it 10-0.

Bonvillain’s single brought Herring around then both Bracey and Hicks reached on errors. The latter was a wild throw that allowed both Bonvillain and Bracey to score. Hicks wound up on third and, with Glenn running, Nichols’ fly to left was dropped, she scored to make it 14-0.

Suarez’ second triple chased in Nichols to make it a 15-after-3 run-rule final.