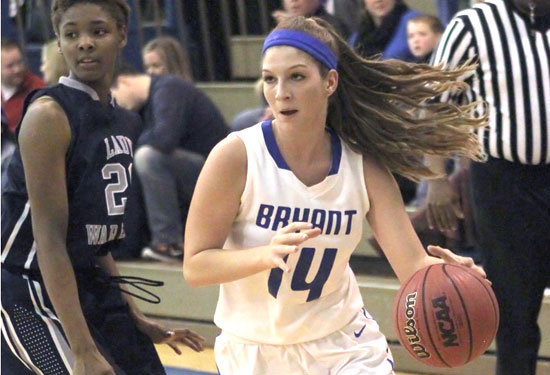 During their struggles over the last month or so, it seems the Bryant Lady Hornets have had an inordinate number of shots, often from point-blank range, just roll off the lip of the rim or swirl around as if to go only to fly out of the cylinder. 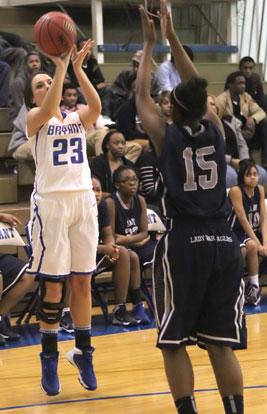 It’s been frustrating because they often get pretty good shots, even against the best of defenses, that somehow just refuse to drop.

There’s bound to be a night when they do eventually and perhaps they’ll get on a roll like they did to start the season when they won three games, scoring over 54 points in each.

By the looks of the score, one might think that Friday’s 57-32 win over the Little Rock J.A. Fair Lady War Eagles was such an outing. But it wasn’t.

So, how did the Lady Hornets pile up 57 points, their biggest total since a 65-45 win over Camden Fairview on Dec. 5?

Aided by 32 turnovers by the winless Lady War Eagles, the Lady Hornets kept firing and enough of their shots went in to forge the victory, their first in South Conference play.

“I thought we were able to work on some stuff tonight, execute,” said Bryant coach Brad Matthews. “We’ve seen a lot of different kinds of defenses by now and one of the things I thought tonight was that we got better ball reversal against their zone. We did a better job knowing what we were looking for. I thought we shared the ball well at times. That’s definitely something to build on. 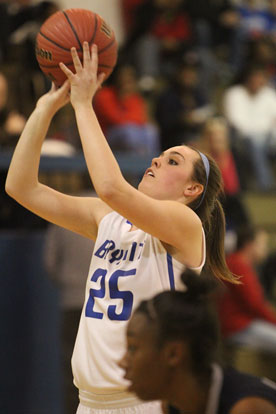 “Our kids are working hard in practice,” he noted. “We went through a little rough patch the last couple of weeks so tonight was a good win for us. It kind of gives you a chance to take a breath and enjoy for a little while.”

Bryant snapped a four-game skid improving to 5-8 overall and 1-2 in league play going into Tuesday’s trip to Sheridan.

Matthews said he hoped his squad gained confidence from the win.

“We’ve got a tough stretch here, starting Tuesday but I think — if we start making a few shots, start rebounding a little better — we’re not that far away from being able to beat some good teams,” he asserted. “We’ve just got to keep working and trying to improve every practice.”

The Lady Hornets pushed out to a 7-0 lead to start the game. Allen got things going with a layup off a nice dish from Otey, who followed up with a steal. Allen wound up at the free-throw line where she converted once. A minute later, she hit another layup, made a steal out of a Fair timeout, and converted twice at the line.

Kimberly Gaines broke the ice for the Lady War Eagles at the 4:59 mark but Weaver trumped that with a 3. Allen posted up for a bucket and it was 12-2.

Fair cut the margin to 16-9 by the end of the first quarter and was able to hang around in the second period despite 6 points from Anderson and another triple by Weaver. 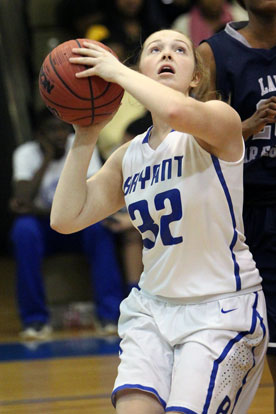 The lead was down to 25-19 going into the final two minutes of the half. But Weaver fed Anderson for a bucket and Smith scored after collecting and offensive rebound, making it 29-19 at the intermission.

The lead was never less than double digits the second half. Fair was within 36-24 going into the final minute of the third quarter but Baxter planted a 3, Annie Patton added a free throw and Allen scored despite being fouled with :03.2 to go, making it 42-24 to start the fourth.

That late surge in the third ignited a 16-2 run that put the game away. Baxter started the fourth quarter with a steal but missed the front end of a one-and-one. The carom went off one of the Lady Eagles and out of bounds and Smith rebounded a missed shot and was fouled. She knocked down both shots as did Otey who was fouled after a Fair turnover.

Rachel Boyd interrupted the surge with a basket for the Lady War Eagles but Otey added two more free throws. Smith swiped a pass and Otey scored off the offensive glass. Smith then made it 52-26 with a short jumper.

In the final three minutes, Baxter hit a layup then fed Rachel Miller in the post for a basket. Taylor Hill capped the scoring with a pair of free throws in the final minute.