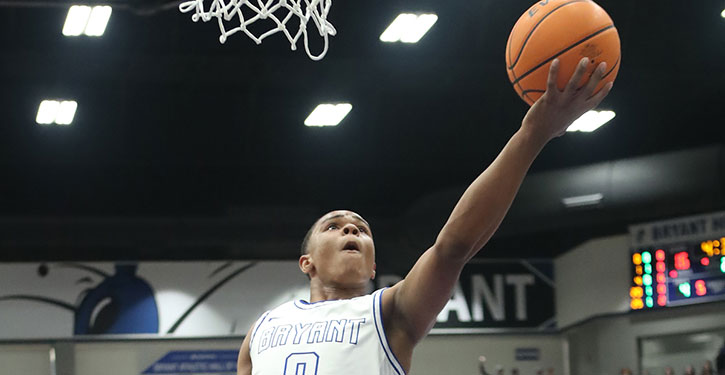 LITTLE ROCK — The Bryant Hornets needed a spark. They needed something different than what they were producing in the first half of the 6A-Central Conference game at Little Rock Central on Friday.

Both teams struggled to find the bottom of the basket in the first half, which ended with Central’s Tigers leading 17-15. The Tigers had been 6 of 22 from the field while the Hornets were 6 of 24 including 1 of 10 from 3-point range.

Something had to change, and Bryant head coach Mike Abrahamson decided to deploy his team in a half-court trap in the second half.

It made a difference as the Hornets escaped the old Central gym with a 54-49 victory, improving to 10-6 overall and 2-1 in league play going into Tuesday’s home contest against Fort Smith Southside.

“We just wanted to play at a faster tempo,” Abrahamson explained. “We thought that would help. We weren’t running like we wanted to on offense the first half — and attacking. Credit to Central because they slowed us down. They did a good job. We were just trying to pick up the pace.”

By springing the trap on the Tigers after intermission, it made it harder for them to adjust. They didn’t have many more turnovers than they did in the first half, it was just difficult for them to run an offense.

And the defensive success led to a little more on offense. After just 15 points in the first half, Bryant scored 39 in the second half as Camren Hunter, A.J. Jenkins and Treylon Payne began to turn down 3-point looks to attack the basket.

“Even when there was a dead ball or something, our offense was a little bit better,” Abrahamson related. “I don’t know what was wrong with us the first half but it’s good to be able to be successful in games multiple ways.

“But we found a way,” the coach asserted.

The Hornets got a big lift from senior Devin Pitts off the bench. He had 9 points in the second half.

Foul trouble contributed to the first-half struggles. Four Hornets were on the bench with two fouls by halftime. That meant more playing time for Pitts, out for basketball after a strong season for the football team as the snapper.

“Devin was huge,” Abrahamson said. “You know, he’s slowly but surely getting comfortable with his role on the team and what his various assignments are, his jobs. And he’s a load. He’s got great hands and footwork.

“Credit to him because it hasn’t been easy for him,” the coach added. “It’s been quite an adjustment. Not playing basketball for us and to come in as a senior and not knowing what we’re doing, he’s just stuck to it. It didn’t come easy for him right away. A lot of guys in that position would quit. And he didn’t. So, I’m really proud of him for what he’s contributed to our team.”

In the first quarter, Bryant led 5-4 with 5:52 left. But the Hornets did not score the rest of the quarter. The Tigers didn’t fare much better but managed a 10-5 lead going into the second period.

Baskets by Hunter and Jenkins to open the new quarter allowed the Hornets to close the gap to 10-9. Cody Robinson responded with a 3 for the Tigers. Johnnie White added a free throw. The Tigers had a chance to increase a 14-9 advantage, but Bryant’s Aiden Adams took a charge leading to a basket by Hunter following his own miss.

The Hornets had two chances to even up the score or take a lead but two trips to the free throw line produced nothing. So, when Price hit a 3 with 1:03 left in the half, it pushed the lead to 17-13.

After another missed opportunity at the line, Hunter got free for a basket with :20 left to make it 17-15.

Hunter and Catrell Wallace combined to force a turnover at the beginning of the third quarter. Payne cashed in with a drive to the rack that tied the game at 17. Hunter scored off an inbounds play to put the Hornets ahead.

After a Tigers’ timeout, Khasen Robinson made a steal that led to a stickback for Wallace. Moments later, Jenkins drove for a layup and the Hornets led by 6.

It was almost halfway through the quarter before Central scored. Cody Robinson drove for a basket to spark a rally. Jones tipped in a teammate’s miss then Price came through with a three-point play, which put the Tigers back in the lead.

But that was the last the Tigers would score until just 18 seconds were left. Bryant surged back into the lead behind Payne and Hunter. The Hornets led 32-30 going into the fourth.

Payne hit a 15-footer then Central turned the ball over against the trap. Payne drove the lane and kicked out to Adams for an open 3 that splashed. It was Bryant’s second and last 3 of the game.

With consecutive buckets by Jones, the Tigers kept close. It was 37-34 before Pitts posted up for a basket inside. Price trimmed a free throw from the difference, but Hunter made a whirling move at the basket and scored.

Kiyler Hudson trimmed a free throw from the advantage but, at the other end, Pitts grabbed an offensive rebound, scored and was fouled. He completed the three-point play and, suddenly, the Tigers were behind 44-36.

Jones missed two free throws, but Hunter made his, giving the Hornets their first double-digit lead with 3:05 to play.

With 2:52 left, Cody Robinson hit a free throw only to have Pitts rebound his missed second shot. He was fouled and, at the other end of the floor, knocked down both free throws to make it 48-37.

But the Tigers trimmed it back to 6, 51-45, a run punctuated by Price’s 3. Central had a chance to get closer but turned the ball over and Hunter flew in for a dunk with :39 to go.

Khasen Robinson hit a free throw with :27.9 left to make it a 9-point lead. A pair of late baskets by Jones whittled the margin down to 5.