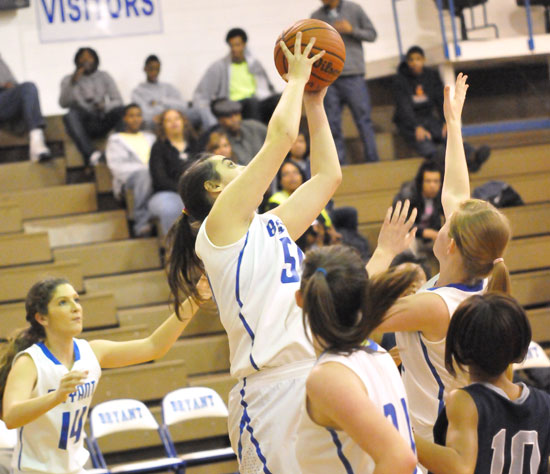 You’ve got to give the Lady War Eagles of J.A. Fair credit, they keep[more] showing up — all eight of them — they keep trying but they keep losing. And losing badly. Earlier this season, they were on the wrong side of an 88-0 game. 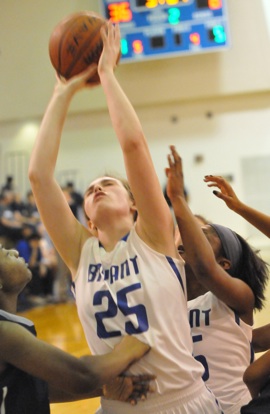 It’s nothing new, of course. No Fair girls team has won since 2008, a losing streak that spans over 100 games.

But they were there again on Tuesday night and the Bryant Lady Hornets took their turn, rolling to a much-needed 62-15 victory that snapped a three-game losing streak to the top three teams in the South Conference.

Twelve of the Lady Hornets played — only ailing starter Dezerea Duckworth didn’t — and 10 of them scored including a 3-point shooting barrage in the first quarter. Peyton Weaver, Courtney Davidson and Kristin Scarlett supplied five triples. Scarlett nearly made it two apiece but she had a toe on the line when she hit her first basket.

That was part of a 27-point first quarter that produced a 21-point lead. And the dye was cast.

Davidson finished with 13 points and 11 rebounds in two quarters of play. Erica Smith added 10 points in the two other quarters. Weaver and Logan Davis wound up with 8 each, Scartlett 6, Destin Nichols and Jayla Anderson 5 apiece. Whitney Meyer finished with 3 points and six boards, Hayley Murphy and Madeleine Baxter had 2 each with Baxter, a guard, hustling after eight rebounds. 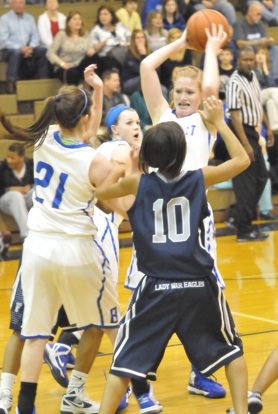 The Lady Hornets attempted a whopping 73 shots and wound up with 48 rebounds, half of which came on the offensive end.

For Fair, Ta’Nia Williams scored 11 points but needed 30 shot attempts to get that.

Weaver followed up a free throw by Davidson with her first trey to make it 4-0. Williams got Fair on the board but then Weaver drained another triple and Davidson canned another to make it 10-2.

The Lady War Eagles put together back-to-back baskets by Mahogany Long and Williams to get within 10-6 but then Davidson started a 22-0 blitz with her second 3. Scarlett followed with her long jumper for 2 and, moments later, her 3 to make it 18-6.

Davis made a steal and Davidson was fouled following her own miss. She converted both free throws and Davis followed with a drive for a layup. In the final minute of the quarter, Scarlett hit a free throw, Davis drove for another layup and Anderson fed Smith for her first bucket to make it 27-6.

Smith went on to score 6 of her team’s 9 points in the second quarter. The other 3 came on a three-point play by Anderson, off an offensive rebound. 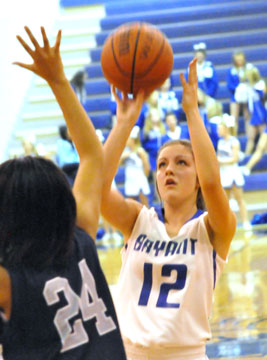 Baskets by Davidson, Davis and Meyer, who also hit a free throw, extended the margin to 45-8 before Williams hit a 12-foot jumper. Weaver countered with a layup and Davidson sank a pair from the line after grabbing one of her five offensive boards.

Bryant’s starters went to the bench for good with 2:41 left in the third quarter. Before the period was done, Murphy and Smith had added to the lead, making it 53-12 going into the fourth quarter.

With the mercy rule in effect, the Lady Hornets scored 9 points down the stretch. Baxter hit two free throws, Nichols drilled a 3 then an eight-footer before Anderson closed it out with a stickback in the final minute.

The Lady Hornets improved to 10-14 overall, 4-6 in conference play going into a trip to Sheridan this Friday. 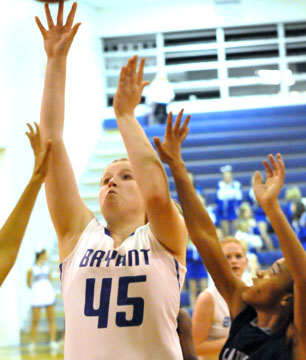