This day in Bryant athletics history: 2010 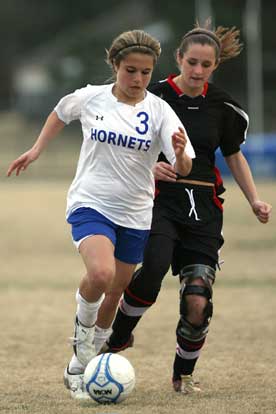 NORTH LITTLE ROCK — From the start, Bryant Lady Hornets soccer coach Julie Long was determined to have her team in good condition this season. It’s paying off now.

For the second game in a row, the Lady Hornets played through regulation and two overtimes to get to a shootout where they still had the stamina to knock in four PK’s that, combined with a save by keeper Kaitlin Miller and a North Little Rock miss, won the 7A-Central Conference match.

The win improved the Lady Hornets to 7-5 overall and 4-3 in league play. They’ll host Little Rock Central on Tuesday, April 6, then visit Mount St. Mary Academy on Thursday, April 8, as they begin the second half of the conference round-robin.

In the shootout, Katie Moore and Lauren Reed matched North Little Rock goals. After Miller’s save, Sarenity Gomez knocked in a shot for the Lady Hornets and, after the North Little Rock miss, Lexi Balisterri got her shot to go to end it.

During regulation and through the two overtimes, the teams played to scoreless deadlock.[more]

“During regulation, we out-played them,” noted Long. “We just cannot score.

“It was really hot and the (artificial) turf made it a little bit warmer,” she added. “The girls looked a little fatigued. On Tuesday, they’d played against Cabot but went to double overtime as well then the PK’s. It wasn’t our best showing but their fitness is paying off. They fight through the fatigue and found a way to win.”

“I don’t think (North Little Rock) had more than two shots on goal,” she said. “We controlled the game for the most part, we just can’t finish. That’s been our biggest struggle all year.

“Katie Moore really stepped up and really played good,” Long noted. “Our defense was really, really solid. I never really got nervous about any of their shots. I thought our defense stepped up and played really well.

“We’re to the point now where we’ve got some fine-tuning to do,” she concluded. “We’ve got to take that extra step and get things right where we can actually put the ball in the back of the net. I know it’s frustrating for the girls because they do everything I ask them to do. We just can’t score. I honestly think now, it’s a mental block, more of a confidence thing that anything else. We’ll be fine. The girls are fighting through it and we’re getting to PK’s and shooting. I’d put us up against any team right now in PK’s.”