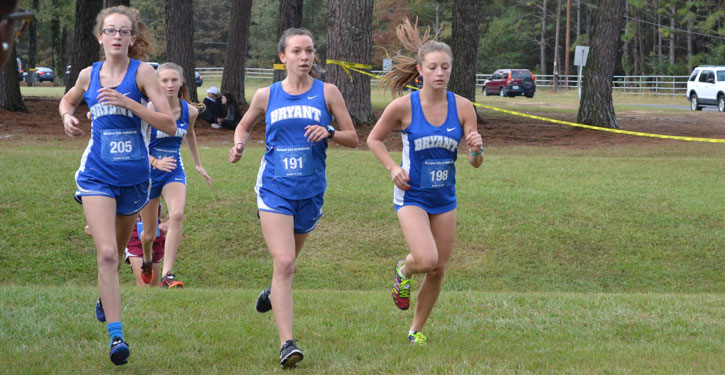 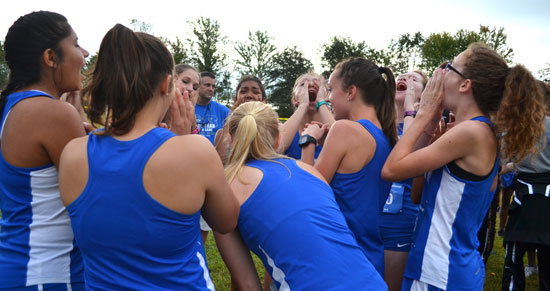 CONWAY — Buoyed by the addition of freshman Olivia Orr, the Bryant Lady Hornets placed four runners in the top 20 as they captured team honors at the annual Wampus Cat Invitational cross country meet on Saturday at Lake Beaverfork.

“I was very happy,” he related. “I was watching the junior high race and walking through there, listening to them make the announcements. They said, ‘First place, with a score of 100 points, Bryant.” I looked around and said, ‘Did they say Bryant?’”

“I ended up moving Olivia up to give her a little more experience running the 5K,” Dale said. “She ran a good time there at Chile Pepper (in Fayetteville on Oct. 1), so I knew she was going to be able to help us at senior high.

“We went out through the first mile with all four of those girls, Sydney, Bree, Bailey and Olivia, right there side by side, running in a big old pack,” he recounted. “They stayed that way throughout the entire race. Even when they came through at the finish line, all four of them were under 22 minutes. It helped us a lot.

“We’re going to need to really work the next few weeks before conference to try to lessen that gap between the fourth and fifth,” he mentioned. “But all in all, we had a great meet. I was very proud of them.”

Dale took a limited number of runners as strategy ahead of the conference meet at Rolling Hills Country Club in Cabot on Oct. 31 and the Class 7A state meet, which will be held at Oaklawn Park in Hot Springs on Nov. 12.

“What I did this week was kind of split our varsity up into two different groups,” he explained. “The group that ran this week will have the next two weekends off. And the group that going to run next weekend has this weekend then the following weekend after Lake Hamilton off.”

Bryant competed at the Lake Hamilton Invitational next Saturday at Oaklawn Park.

“I’m trying to work in a couple of weekends so that they can have a little bit more recovery in there to really finish strong,” the coach stated.

The Junior Lady Hornets earned a second-place finish despite the loss of Orr to the varsity. They finished with 94 points. Vilonia, with all five scoring finishers winding up in the top 11, posted a miniscule score of 30 to take team honors.