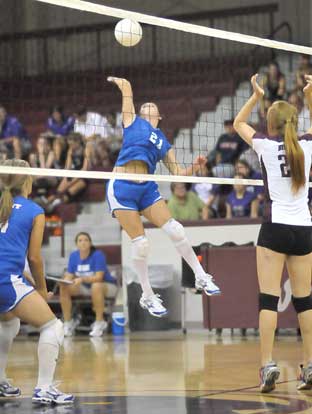 BENTON — As might be expected, the Bryant Lady Hornets had their good moments and their not-so-good moments Thursday night as they played five games against five different opponents at a pre-season jamboree in Benton.

The evening was highlighted by a 25-21 win over 7A/6A-Central Conference rival Mount St. Mary and an extended battle against the defending 6A State champion Lady Panthers of Benton that ended with the host team surviving 30-28.

The Lady Hornets open the regular season at home on Tuesday, Aug. 24, against Fountain Lake. Regular-season matches are best-of-five games.

“To be honest, I think we finished the night on a low note,” said head coach Beth Solomon. “We didn’t finish near as well as I feel like we should have. And the girls kind of felt the same way judging from the things they were saying after we talked.”

The girls started with a 16-25 loss to Little Rock Christian then topped Mount and battled Benton before losing 16-25 to Malvern. The Bryant JV team completed the evening with a 25-23 win over Little Rock Mills.[more] 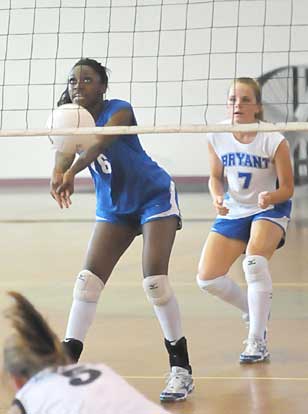 “I felt like they played the best that I’ve ever seen them play against Benton since I’ve been at Bryant as an assistant and now as a head coach,” she stated. “At one point, we were down nine points, like 18-9. We came back and tied it up then it kind of went back and forth.

“The girls really picked it up in that game and played well,” Solomon added.

Of the other games, the coach said, “The first game out, they didn’t play up to their level by any means. They played okay.

“The second game against Mount, we won which is a good thing because Mount is a conference team,” she continued. “After the Benton game, we just kind of went on a low. Against Malvern, we played not so well at all. We definitely should’ve played better than we did.

“Luckily, we play Malvern again next week (Aug. 26) so we can get a little rematch,” Solomon mentioned. “We’ll be ready to play.” 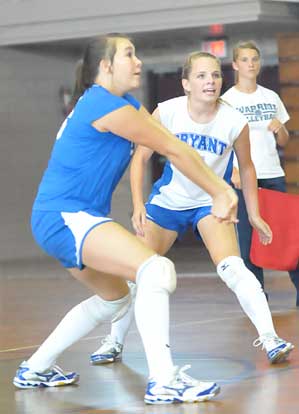 Regarding the JV’s game, she said, “They played okay but still didn’t play to the level that they should have either.”

In assessing the team’s play overall, Solomon said, “Our serve-receive is one thing we need to work on. We had way too many shanked passes that should’ve been balls that we had up, had good plays on.

“Our hitting, we’re really going to go back and focus on our hitting (Friday) in practice, just work on the fundamentals of it,” she continued. “We’ve got some good hitters on our team but something was off with them. On that same note, though, when we did have good hits, they were really good hits.

“They played well together for the most part,” she mentioned. “That’s something I feel like we’re still working on though.

“But the first game out, I’m not super happy with how they played but I’m also not just extremely disappointed either. I definitely think it was kind of a wake-up for them, like ‘Hey, the season’s started. It’s time to pick it up a little bit.’ Next week, when we play not just the one game stuff, where they can actually get like a regular match, I feel like they’ll play better. They’ll be able to get more of a groove going and be ready to really step up and shine.”

Bryant golfers get in plenty of work over two days
August 20 in Bryant athletic history: 2007