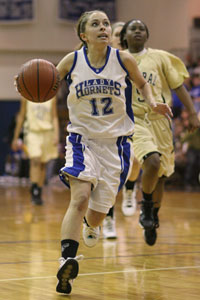 Lady Hornets head to State on a winning note

On Friday, Feb. 27, Bryant Lady Hornets coach Blake Condley will be in Springdale. That’s where the Springdale Lady Bulldogs will be battling the cross-town rival Har-Ber Lady Wildcats.

Condley will be there to scout the Lady Hornets’ first-round opponent in the Class 7A State Tournament. It’s a first for Condley in his brief stint at head coach of the Bryant girls, the first for the program since the 2005-06 season.

And the Lady Hornets will be going into the tourney on a winning note. They hit just enough of their free throws in the late stages of their regular-season finale against the Little Rock Central Lady Tigers to forge a 46-43 victory on Tuesday, Feb. 24, that snapped a three-game skid.

Bryant takes a 19-6 record into the post-season, never having lost back-to-back games until those three in a row. As had been during better stretches for the Lady Hornets, they found a way to win.

Anna Simpson, Hannah Goshien, Alana Morris and Haley Montgomery all converted at the line in the final 1:35 of play, turning a 41-40 deficit into the winning margin.[more]

“Some shots fell tonight,” Condley explained. “We still didn’t shoot as well as we have in the past but, just to hit a couple of shots, you see a little confidence. We were able to make a couple of runs here and there, using what I feel like we’re best at and that’s getting out and pushing the ball.

“We made plays when we had to,” he added. “We took care of the ball when we needed to, late when they had to have the ball back to be able to score or the clock’s going to run out. We ripped through, we stepped through the double teams. We did what we had to to keep possession, get to the free-throw line and knock down free throws to win the game.

“Central did a good job of trying to slow it down, trying to make it a half-court game,” he mentioned, “but that’s something we’ve been working on the last week, week and a half of practice. We’re just now starting to get better at it which is a good time. We’re getting ready to go to the State Tournament. I tol 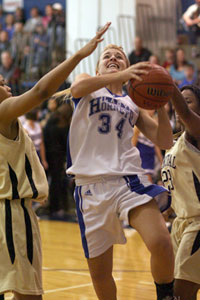 d the girls that that’s what tonight was about, ‘Let’s just play better. Let’s just worry about the quality of our play. The scoreboard will take care of itself. Let’s just try to play a good ballgame.'”

Seniors Taylor Hughes and Simpson were honored as they played their final home game and the duo combined for 19 points, with Hughes finishing with a team-high 10. Morris added 9, Kenzee Calley 7 and Goshien 6.

Bryant led by 8 early in the fourth quarter but Central, sparked by Adre Ann Walker and Breanna Barnes rallied. When Walker got a stickback with 3:19 left, the Lady Tigers had pulled ahead 38-37. But Simpson answered with a clutch 3-pointer from the corner to put Bryant back up.

Dee Dee Arline tied it with two free throws at the 2:49 mark and, after the Lady Hornets couldn’t get a couple of shots to fall, a free throw by Shawnasee Arnold put Central ahead by a point with 2:25 to go.

The teams traded turnovers before Simpson was fouled at the 1:35 mark. She converted once to forge another deadlock. With 1:11 showing, Walker was fouled but she couldn’t get either shot to fall. Goshien gathered the rebound and was fouled at the 1:07 mark. Her free throws gave the Lady Hornets a 43-41 advantage.

Barnes, who led all scorers with 18 points, got a look from the top of the key but the shot rimmed out and, with :48.9 left, Morris was fouled after pulling down the rebound. With a chance to make it a two-possession game, however, Morris could only get one freebie to drop and Central had hope. Barnes drove for a bucket with :40 left but, after a timeout, Montgomery was fouled with :28 to go.

Again, two free throws would’ve made a two-possession game and taken some of the tension out the air but Montgomery converted once and Central rushed up the floor only to have Arnold’s driving shot rim out hard. Goshien rebounded but, again, managed to get only one of her shots to go with :09.2 showing. The Lady Tigers had time for a final shot but, because of the Bryant defense, Barnes had to take a long 3 from the left wing that bounced high off the iron and harmlessly to the floor.

Bryant had opened the game with an 7-2 run with Simpson hitting a pair of free throws, Hughes canning a triple and Calley hitting the offensive glass for a hoop.

Central answered with a 12-2 blitz with Barnes contributing a 3, a driving layup and a short jumper. It was 16-11 going into the final :35 of the quarter but Goshine in a free throw and, after a Central turnover, Morris banked in a running jumper to beat the buzzer, clipping the margin to 2.

The Lady Tigers held the lead through the second quarter, holding Bryant without a field goal. But the Lady Hornets knocked down 5 of 8 free throws and stayed within 23-19 at the break.

Arnold hit a layup to start the second half but then Calley came through with a three-point play to spur a Bryant run. Hughes made a steal that led to a layup by Morris then another she cashed in herself, giving the Lady Hornets the lead 26-25.

Despite a timeout, Bryant run continued with a pair of free throws by Morris after she followed her own miss and was fouled. Montgomery drove for a layup and, after Central miss, Morris followed a teammates misfire for a deuce that made it 32-25. Lesley Craft interrupted with a free throw but a driving layup by Hughes produced the largest lead of the game, 34-26.

Barnes hit a 3 but Calley’s short jumper made it 36-29 going into the fourth quarter which started with a free throw by Simpson. Walker answered with a pair from the line, starting Central’s push to the lead.