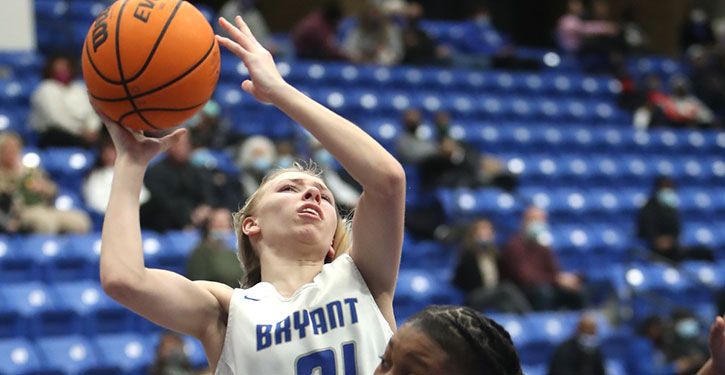 Lady Hornets open State with a morning game vs. Har-Ber

The Springdale Har-Ber Lady Wildcats (or as they like to call all the teams in northwest Arkansas, the Wildcat women) may be 12-12 on the season but over the last few of weeks, they’ve played 6A-West Conference regular-season co-champ Fayetteville with 4 and the other co-champ Bentonville within 6.

Pretty tough for a 4 seed.

So, the Bryant Lady Hornets, seeded fifth out of the 6A-Central Conference, will have their hands full on Tuesday morning when the two teams meet to kick off the Class 6A State Tournament at Fayetteville High School. Tip-off is set for 10 a.m.

All games can be viewed live through the Arkansas Activities Association app.

The Lady Hornets are 13-10 after winning four of five conference make-up games in the last week. They are led by junior Parris Atkins, who starts with sophomores Natalie Edmonson, Lauren Lain and Emileigh Muse along with freshman point guard Brilynn Findley. The first player off the bench is the team’s lone senior Lauryn Taylor on the front line and junior Shamya Jordan in the backcourt.

With the young a team, every bit of experience is of great value.  Of course, a win would make it even more so.

“Har-Ber’s very talented,” said Lady Hornets head coach Brad Matthews, who took over the program before the 2011-12 season and has led the team to State in nine of the last 10 seasons, and fourth in a row.

“They’re very well coached,” he continued. “Coach Kim Jenkins does a great job with them.

“(Caylan Koons, a 5’8” junior) is really explosive,” the coach added. “She’s a Division I volleyball kid who’s had multiple games where she goes for 20 or 25.

“It’s a really good team. We’ll have our hands full,” he related. “I think if we can play well and take care of the ball. They’re going to play pressure man most likely. If we do a good job of taking care of the ball and execute on offense, we should have a chance.”

The Lady Hornets have three players who have hit four or more 3’s in a game, including Edmonson, who drilled six of them against North Little Rock. Muse had five against Benton and Findley hit four on a couple of occasions.

Atkins can hit the 3 as well but has specialized in slashing moves through a defense to get to the rim, often the free-throw line as well. She’s also developed a pull-up jumper that’s been effective.

“It’s that time of year where any team you play is going to be good and if you want to win and advance you have to play well yourself. We’re excited about it, looking forward to it.”

The winner gets a date with top-ranked Fort Smith Northside on Thursday at 10 a.m., a team Bryant has played twice, losing both times to playing with them until a second-half drought in their last meeting at Fort Smith on Feb. 2.

Here are the brackets for the girls’ tournament: