Lady Hornets persevere, get past Cabot in shootout 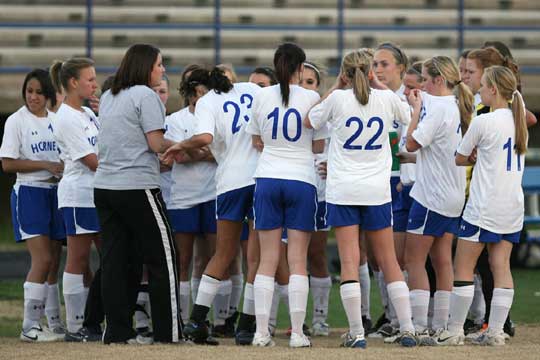 Perseverance: noun; steady persistence in a course of action, a purpose, a state, etc., especially in spite of difficulties, obstacles, or discouragement.

That is the word to sum up Tuesday night’s 7A-Central Conference soccer game between the Bryant Lady Hornets and the Lady Panthers of Cabot. After 80 minutes of regular play and another 20 of overtime, then on top of that a shootout, the Lady Hornets became victorious, winning 2-1.[more] 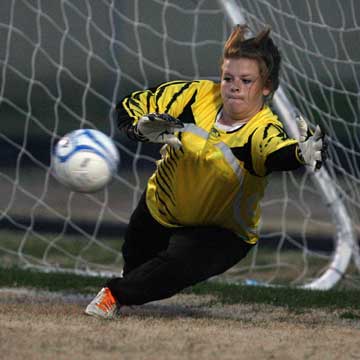 Early in the game, Bryant goal keeper Kaitlyn Miller let one ball off of a free kick slip by her. But after that, you forgot she was there. The reason for that is because of the midfielders and defenders.

“The girls stepped up and played to the potential that they can,” declared Lady Hornets coach Julie Long. “I was proud of them.”

Lyndsay Brazil, Sarenity Gomez, and Kaite Moore were part of the reason Miller was forgotten about, helping out the keeper when she was in trouble and keeping the ball cleared out and on the Cabot side of the field the majority of the night.

With 21:45 left in the game Lexie Balisterri found herself inside the 6-yard box with two Cabot defenders and the Cabot keeper. After what others might perceive as an impossible task, Balisterri tapped the ball in for the tying goal. 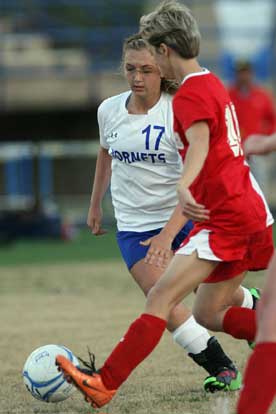 Tarra Hendricks had another great game. She played every ball like it was her last. She had multiple shots on the Lady Panther keeper. Shelby Gartrell, and Balisterri were trouble for the Lady Panthers all night. A total of 13 shots were taken.

Ten seconds before halftime, London Abernathy was in a violent head-on collision with a Lady Panther player. The sound could be heard from inside the press box. Abernathy had to be escorted off the field and had to receive medical treatment. She suffered a broken nose in two places and received six stitches. It is uncertain if she will be available for Thursday’s game against North Little Rock.

Even after all that excitement, the game went into a shootout.

Up first for Bryant was Moore … goal;

Then a Lady Panther … save, Miller;

Next for the Lady Hornets, Lauren Reed … goal; 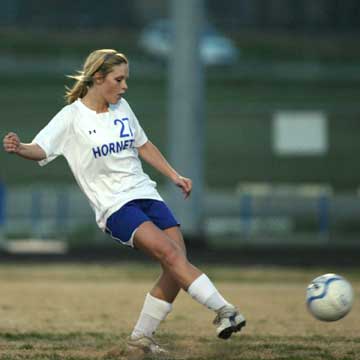 On the Lady Panthers’ turn, a shot got just past Miller, low on the right side, for the first goal.

It all came down to Balisterri. If she made it, the Lady Hornets survived. She shot, low on the left side … goal!

During halftime, Coach Long said, “Hey, let’s just go have fun.” And that is just what the girls did.

After a week off for spring break — and this being the first real “hot” weather the girls have played in — they showed just how much they really want to finish the season strong. By playing as a team and working together, the Lady Hornets will finish strong.

They take a 6-5 overall record and 3-3 mark in the 7A-Central Conference into Thursday’s match at North Little Rock.