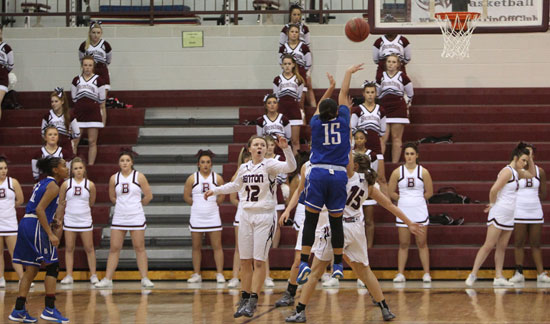 Lady Hornets’ pull away from Lady Panthers with second-half run 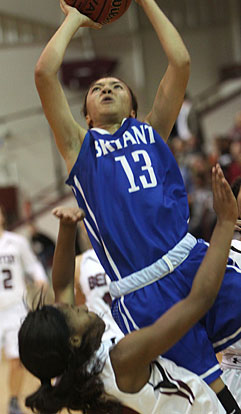 Raija Todd (13) shoots over a Benton defender that was unable to draw a charge. (Photo by Rick Nation)

BENTON — Neither the Bryant Lady Hornets nor the Benton Lady Panthers could seem to get any separation. Bryant had managed a 5-point edge early in the second half for the largest lead of the game. But Benton had rallied to tie it at 20 on a 3-pointer by Abby Clay.

Bryant’s Emily Ridgell countered with a triple but Clay answered with a drive for a basket. She had a chance to tie it at the free throw line but was unable to complete the three-point play and the Lady Hornets held a 23-22 edge with 4:21 left in the third period.

The teams traded turnovers before Raija Todd drilled a 3. Benton’s Italei Gray drove for a basket to keep it close. With 2:41 to go in the quarter, Ridgell was fouled. She converted once and as his team got back on defense, Lady Hornets coach Brad Matthews turned to assistant Joanna Curtis and said, “We just need a 6-0 run here.”

“We needed a little separation,” he explained after the game. “You don’t want to anything close at the end of Benton and Bryant. You want to make sure it doesn’t come down to one possession. Crazy things happen in Benton-Bryant games.”

Clay missed a shot and at the other end, with two minutes to go in the third, Rachael Miller grabbed an offensive rebound and scored to make it 29-24.

And when Benton turned it over on a three-second lane violation, Todd knocked down a lean-in jumper from 8 feet.

Ridgell made a steal after a Benton timeout but the Lady Panthers forced a turnover. On the subsequent inbounds play, however, they couldn’t get the ball in against the hustling Bryant defense. The Lady Hornets, however, turned it back over.

But finally, Todd made a steal and beat the buzzer with a layup to give Bryant a 33-24 lead. Matthews had asked for a 6-0 run, his team had provided a 7-0 spurt to end the third quarter. 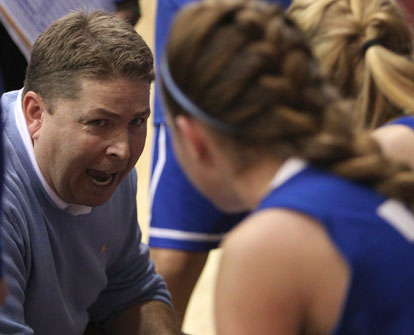 Brad Matthews instructs his team during a timeout. (Photo by Rick Nation)

And when Todd drove and hit an off-hand jumper off a drive to start the fourth quarter, it became a 9-0 run and the first double-digit lead of the game. Before Benton could score again, Rachael Miller hit a 15-footer and Kendall Rogers scored off an inbounds play. Miller added a free throw and the run had been extended to 14-0. It was 40-24 before Benton’s Taylor Oglesby finally ended her team’s neawrly nine-minute drought with 2:08 left to play.

The Lady Hornets went on to close out a 40-32 season-opening victory.

“Our kids stepped up and made some shots,” Matthews noted. “(Benton) is a pretty good rebounding team. I thought we held our own on the boards and that allowed us to get out a little bit and go on that little run there.” 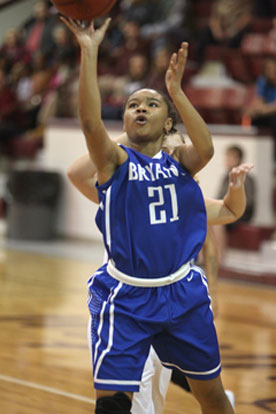 “She’s a great player,” Matthews said. “She signed with Arkansas Tech, one of the better Division II schools in the nation. (Benton) Coach (Jerry) Chumley’s done a great job with her over the last year or two and she’s developed into a really good player. She’s a handful.

“I thought Rachael Miller rebounded well tonight,” he said. “I thought she gave us some good defense. And she’ll get in the flow on offense as she gets more and more comfortable with her new role.”

Kendal Rogers scored 2 points for Bryant but made a huge difference when she started picking up Clay in the second half. After the basket that had the Lady Panthers within 23-22 midway through the third, Clay was unable to score again. In fact, she was held without a shot attempt in the fourth quarter.

Actually, the Lady Panthers’ only lead was 2-0 on a pair of free throws by Burchfield. Ridgell knocked down a 15-footer to tie it and free throws by Destiny Martin gave the Lady Hornets a 5-2 lead.

Clay connected for the first of her four 3-pointers in the game but Ridgell converted twice at the free-throw line and Todd canned a running jumper in the lane to give the Lady Hornets a 9-5 lead going into the second quarter. 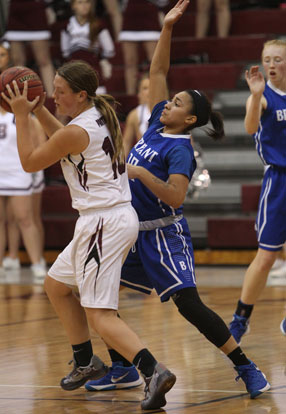 But they couldn’t shake the Lady Panthers who eventually tied the game 15-15 on Clay’s third triple of the half with 2:09 left. Free throws by Todd had the Lady Hornets up 17-15 at the half.

Her 3 to open the third quarter made it a 5-point lead. Clay answered with a drive to the rack. After Burchfield blocked a shot by Todd, Clay drained her final trey to tie it at 20, moments before the game-breaking run by the Lady Hornets.

“I thought we finally got a little flow in our offense, started making some shots and it kind of relaxed everybody,” Matthews commented. “I thought we played a little bit better in the second half.

“Give them credit, I thought Benton played really hard,” he mentioned. “In the first half, I thought we were out of rhythm, to their credit.”

The Lady Hornets are set for their home opener on Tuesday when they host Rogers Heritage.

“When the first game of the year is against Benton, you have to balance learning and learning curves and rust and new roles,” Matthews said, “But you’ve still got to win. I thought tonight we did a little bit of all of that. It’s a good start. There’s a lot of things to watch tape and work on as we prepare for a very good Rogers Heritage team.”