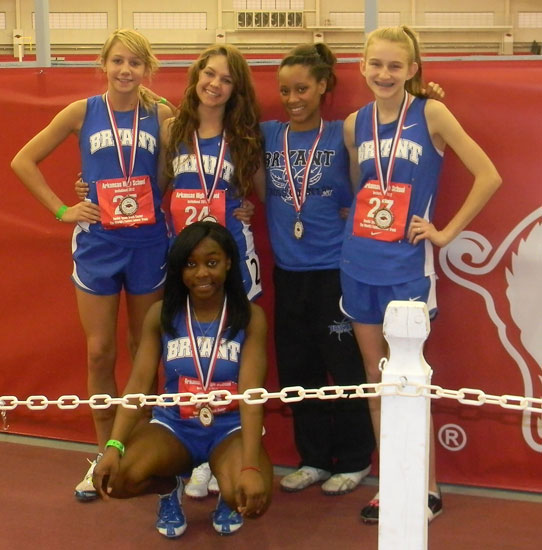 FAYETTEVILLE — At the University of Arkansas National High School Track & Field Invitational held Saturday, Jan. 14, at[more] the Tyson Track Center in Fayetteville, five Bryant Lady Hornets earned bronze medals. The meet brings in top track and field athletes from all over the nation and medals are only awarded to the top three finishers per event.

In the 60-meter hurdles, Alexis Royal was the third best qualifier out of the prelims and with a huge surge to the line off the last hurdle she secured a third-place finish in the final. Royal’s time was a personal best of 9.28. She was the top Arkansas athlete in the event. Royal also added a fifth-place finish in the triple jump with a leap of 36’7”.

In the 4 x 800 meter relay, the team of Hannah Raney, Melinda Murdock, Marley Adams, and Stacy Emmerling earned bronze medals with their third-place performance. With an overall time of 10:24, the relay was the top Arkansas team in the race.

“I am really proud of the girls that participated in this meet,” stated Lady Hornets coach Danny Westbrook. “The level of competition here is exceptionally high and earning one of the top-three awards is a huge accomplishment. These ladies worked extremely hard through the Christmas break and our goal was to bring some hardware home. All five Lady Hornets that competed today won a medal.”