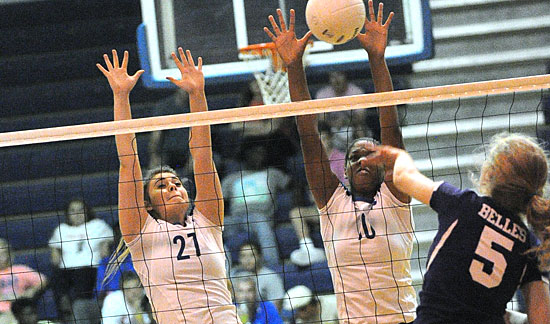 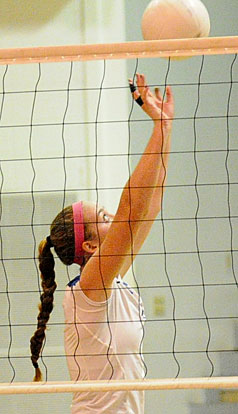 But for a little lull midway through the third set, the Bryant Lady Hornets would’ve made it a straight-set win. But taking three of four was quite adequate as they completed a season sweep of the Mount St. Mary Academy Belles in Class 7A competition in the 7A/6A-Central Conference on Tuesday night.

Bryant travels to 7A Van Buren on Thursday and, with a win, will be hosting Conway on Tuesday, Oct. 20, in a battle for the top seed from the league to State (and, possibly, a conference championship).

“From here, it’s all about seeding,” acknowledged Lady Hornets coach Beth Solomon. “We’ll see what happens. To get the one seed, we’ve got to beat Conway, either in three or by four or five more points than they beat us. So, it’ll come down to that. It’ll be neck-and-neck when we play Conway. It’ll be a good game.”

Anderson had several of her customary high velocity hammer spikes but she, and , Selig, Loveless and Sahlmann particularly effectively incorporated tips or dinks to score. 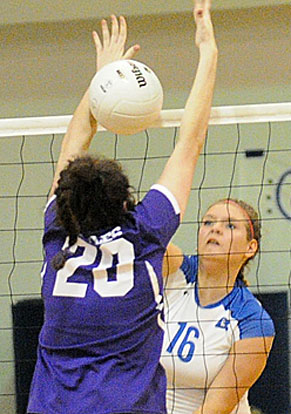 Brittney Warner gets a hit through the arms of a Mount St. Mary defender. (Photo by Kevin Nagle)

“That’s really kind of on the girls,” Solomon mentioned. “I just tell them, ‘You guys have to play smart.’ We play teams like Mount where slamming the ball as hard as you can every time isn’t necessarily the most effective thing. They’re ready for that, which is why sometimes it’s good when we put in a not-as-strong hitter, because they’re ready for that hard hit then they get one not as strong and they don’t get to it.

“So I put that on the girls to see where the holes are and do whatever’s ready,” she added. “Like when Allie, she’ll go up to hit and because they’re backed up ready for the hit, instead of hitting, she just puts it in the hole. Kendall tips very well a lot, making it look like she’s going to hit then not hitting. It kind of catches them off their toes. We keep working on it.”

Sahlmann finished with 33 assists, got in all 21 of her serves including two aces. As a team, the Lady Hornets only had eight service errors in 97 attempts. Kaci Squires led with four aces as she got in all 20 of her attempts. Savannah Shelton and Selig each scored and ace.

“Our serves looked way better tonight than they have in a long time,” Solomon noted. “We still missed some but not like we’ve been missing serves.”

Whitney Brown led with 12 digs. Squires and Sahlmann each had five digs including one in the second set by Sahlmann off her foot.

“I tell people all the time, it pays to have seven State champion soccer players on my team,” Solomon quipped. “We’ll play some teams that, when they do that, the coach goes crazy because they think you can’t do that. But she can. It’s perfectly legal. I’d say we get at least one, maybe two a match.” 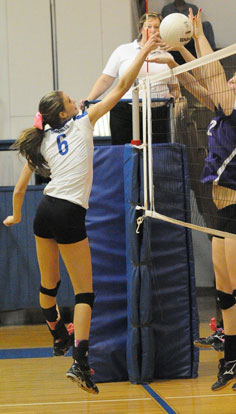 At the net, Dillard had two solo blocks. Warner, Anderson, Selig and Sahlmann added one apiece.

“I thought Britney had an outstanding match tonight,” the coach added. “Allie looked really good. We were going to her a lot, even more than we usually do. It was working for us.”

Anderson got on a run to break open the first set. A service error cost the Belles after they’d tied the game 10-10. Shayla McKissock rotated to the service line for the Lady Hornets who reeled off eight consecutive points, six on Anderson’s hits, all power kills.

Mount rallied from down 19-10 to within 23-22 late spurred by a pair of aces from Taylor Greenwell and Mary Rhinehart’s kill. But another service error produced a sideout and the Lady Hornets managed to close out the win with Selig contributing a clutch kill on a tip.

The second set was tied at 9. A dink by Anderson broke the Belles’ serve. Selig added a tip kill then Warner drilled on. After a hitting error by Mount, Anderson lightly beat the Belles’ block attempt for another kill and it was 14-9.

The lead was just three at 18-15 when Bryant surged to close out the set. Loveless got a kill to start the burst. After a hitting error by the Belles, Squires knocked in a pair of aces on either side of another tip kill by Selig.

Mount broke serve on a dink by Maggie Saad but couldn’t keep it when Loveless knocked down another kill. 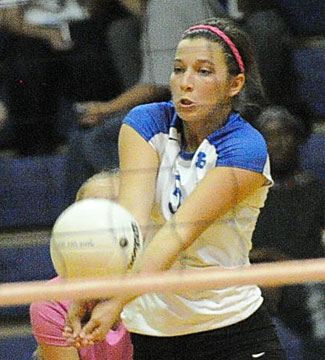 And the Lady Hornets continued to surge to start the third set. Three kills by Anderson, working in the middle instead of outside, another by Warner and a point off a block by Anderson produced a 6-1 lead.

But that’s when the Belles put together their best stretch of play and the Lady Hornets’ hit their lull, suffering three net violations along the way. Mount built a 17-11 edge before Bryant regained its focus, sparked by a net violation by the Belles that Anderson followed up with a thunderous kill. Hill added her first kill then Anderson and Dillard scored off tips. Dillard answered a Bryant service error with a kill, Anderson added two more and Selig served up her ace as the Lady Hornets pulled within 23-24.

A kill by Mount’s Becca Niedzwidz ended the set, however, forcing a fourth.

“I feel like we shouldn’t have gone to four games,” Solomon stated. “We should’ve taken care of business in game three. We tell them, ‘Let’s not be satisfied with where we’re at. Let’s push. Let’s get better. Let’s take care of this in three.’ We kind of spotted them too many points in there, two or three here, two or three there. Other than that, though, we looked pretty good tonight.” 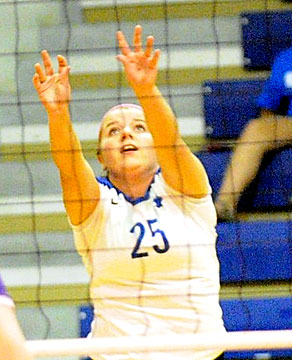 In the fourth set, the Belles managed a 7-5 lead but couldn’t maintain it. Sahlmann’s dink broke serve and, with Squires serving, the Lady Hornets reeled off six straight points with Selig, Loveless and Sahlmann adding kills. Squires had an ace along the way and Sahlmann got her block.

Mount got within four at 10-14 but could get no closer the rest of the match. Bryant led by as much as nine down the stretch, closing out the victory with a “bingo, bango, bongo.”