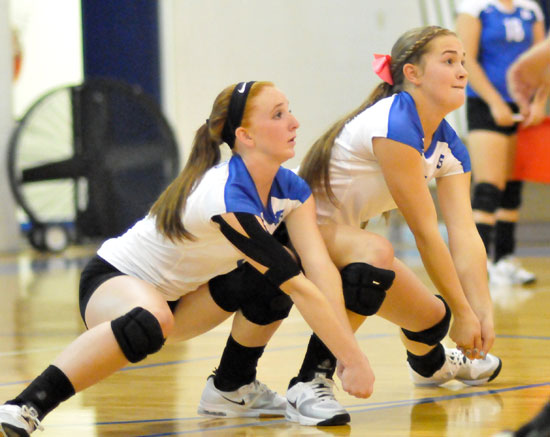 Few teams in any sport are as good at the beginning as they wind up being in the end and that’s even more prevalent when it’s a young team. It’s a process over the span of a season. 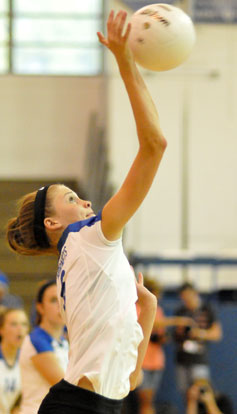 That’s where the Bryant Lady Hornets volleyball team is right now. Take steps along the way and, on Thursday, they took a large step forward against a senior-laden squad from Rogers Heritage. In the 105-degree heat at the Hornets Nest, the Lady Hornets roared back from a 21-25 loss in the first game of the best-of-five and never trailed on the way to a 25-22 win in game two.

The crucial third game was tight throughout with Bryant within 21-22 after a kill by junior Mercedes Dillard. But the Lady War Eagles scored the last three points to forge another 25-21 win and wound up taking the match 3-1 with a 25-15 win in the close-out game.

But Bryant head coach Beth Solomon was excited about the progress of her team over Tuesday’s 3-0 loss at Van Buren.

“We played 1,000 times better than we did Tuesday,” she asserted. “I know it’s still a loss but we’re playing against a team that’s senior-heavy. The majority of their team is seniors. The majority of our team on the court is sophomores. I’m real proud of the way the girls played. Obviously, you want to come out with a win but going four with them is a big accomplishment for these girls. Based on how we played Tuesday, it’s a major, huge accomplishment tonight.

“We’re still inconsistent,” she acknowledged. “We’re still working on our serve-receive, our passing and getting more consistent as far as the passes getting where we need them to be. Consistency is a big thing.”

For most teams, particularly inexperienced ones, that’s the challenge.

“The speed from going from ninth grade to a varsity match is totally different, and they’re getting there,” Solomon related. “I’m not trying to take anything away from them. They’ve all play J.O. (Junior Olympics). They’ve been in fast-paced games but being able to do that for four tonight, that’s a pretty good accomplishment for this week. It’s something to build on going into next week when we play Benton. We’ve got from now until Thursday to get ready.”

That match will be Thursday, Sept. 5, at Benton, the official 7A/6A-South Conference opener for the Lady Hornets.

Against Heritage, Dillard wound up with seven kills to lead the Lady Hornets. Sierra Jones added five to go with two blocks. Kendell Selig and Allie Anderson finished with four kills. Britney Sahlmann set them up with 22 assists and had three kills of her own.

Staton led the team with five aces. Nikki Clay added three and Dillard two. Sahlmann was good on 19 of her 21 serves and Staton was 17 of 18.

“I thought Mercedes Dillard had a great game,” Solomon said. “If I had to pick out one girl that really stood out tonight, it would probably be her. I thought her hits were really on tonight and she was finding the floor a lot. 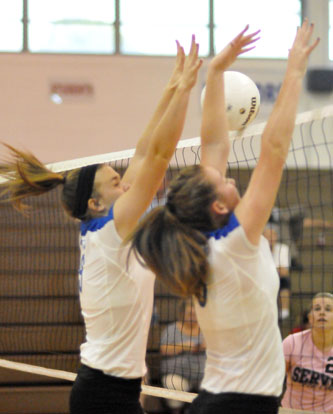 Kendall Selig and Shayla McKissock got up for a block during Thursday’s match. (Photo by Kevin Nagle)

McKissock was seven of eight on her serves. Clay was good on all nine of her attempts and Dillard was 8 for 8.

In the opening game of the match, Heritage held a slight edge much of the way. But when Clay served up an ace to make it 18-19, a hitting error followed that tied the score after the Lady Hornets had trailed by as much as 13-17.

A long, hotly contested volley followed in which Anderson and Madison Greeno combined on a block to keep things going. Moments later, Anderson put down the hit for a kill that gave Bryant its first lead since 10-9.

But hitting errors on three consecutive plays coast them as Heritage regained the upper hand. A dink by Sahlmann had the Lady Hornets within 21-22 but Heritage closed it out from there.

In the second game, Heritage had it tied 4-4 but the Lady War Eagles’ hitting error and a kill by Sahlmann put the Lady Hornets ahead to stay. Bryant built the lead to six when an ace by McKissock and a kill by Selig made it 14-8.

The Rogers team whittled the margin to 3 repeatedly but could not get closer until near the end. A pair of kills by Jones had the Lady Hornets up 24-19 but a kill and a pair of errors cut it to 24-22 before Selig’s spike found the floor to end it.

In the third game, Bryant fell behind 2-6 early but battled back, sparked by kills from Clay and Emily Henson. And when Staton served up an ace the Lady Hornets were up 10-9. A hitting error by Heritage made it 11-9 but the Lady War Eagles surged and pulled ahead 15-14 and never trailed again though never by more than 22-17. Dillard’s two kills around a pair of aces by Staton put the Lady Hornets in position to sneak off with the win, trailing 21-22 but they couldn’t regain the advantage.

Things looked promising in the fourth game at the outset as Bryant built a 4-0 lead with the help of Heritage errors. After the Lady War Eagles got it going, it was a tight contest, tied seven times, ultimately at 10-10. Bryant grabbed the lead with an ace by Dillard but Heritage responded with a five-point run that the Lady Hornets couldn’t overcome. 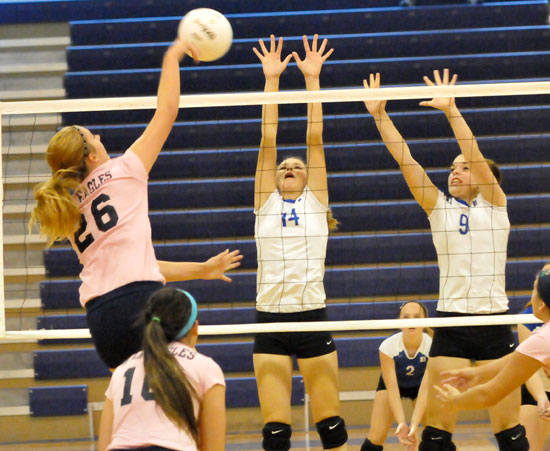