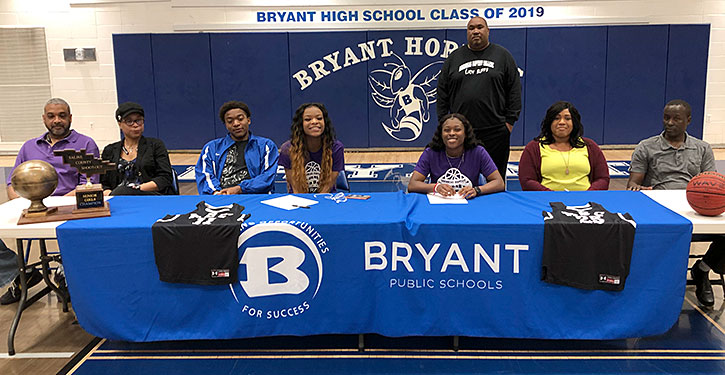 Lady Hornets Steen, Walker moving up but not far away

For quite a while during the 2018-19 high school basketball season, seniors Kalia Walker and Allison Steen were playing off the bench, not starting. But the more the season evolved, the more it made sense. When they entered — and it was often at the same time — the Bryant Lady Hornets instantly got a spark.

That’s because, together, Walker — a scorer, ball-handler and strong defensive player on the perimeter — and Steen — a shot-blocker, rebounder and passer inside — were like the best player you could imagine.

And, as it often turned out, they were both on the court at the end of games.

On a team with few seniors, the duo was an integral part of the best season for a Lady Hornets’ team since 2011, finishing 16-11 including a 54-35 victory over Van Buren in the first round of the Class 6A State Tournament, a game in which Walker erupted for a career-high 34 points.

And now, the combined talents of Walker and Steen will continue to work together, as they both signed to continue their academic and basketball careers at Arkansas Baptist College in Little Rock on Thursday.

“It’s the first time since I’ve been at Bryant, we’ve had two sign at the same ceremony, the same institution,” noted Lady Hornets head coach Brad Matthews. “So, in that regard, this is very special.

“These two young ladies have represented out basketball program at a high level,” he added. “It’s great to see our players have opportunities to further their dreams and achieving everything they’ve worked so hard for. It’s been a blessing to coach them. They each have a tremendous future and a very high ceiling going forward at the next level.”

Walker, the daughter of Tiffany and Roosevelt Walker, and Steen, the daughter of Sharon and Waymon Larry, were invited by AB head coach Dion Cross to come to the school and scrimmage with the Lady Buffaloes.

“It was cool,” Steen said. “He walked us around the campus.”

“I went out there and just balled,” Walker related. “It was fun. I enjoyed playing with the other teammates because they were nice. They were cool, and they seemed like they are really good at basketball and they are really focused on basketball.”

Said Steen, “At first, I was thinking I would wait for other options but me and Kalia talked and we decided we might as well go to Arkansas Baptist. It’s close to home and we can make the team better.

“I was going to Pine Bluff (UAPB), but some stuff happened, and I was like, ‘I’m just going to go to Arkansas Baptist.”

“I looked at all my options and I just kept coming back to Arkansas Baptist,” Walker said. “There was a school in Texas, one in Missouri, some in Oklahoma, some in Nevada — all over. But Arkansas Baptist is closer to home, so I can see my family every day. And they allowed me to play how I want to play and be able to do things that I want to do. And they reached out and they were very nice to me.”

And how does she want to play?

“I like to play fast, and I like to have the ball and make moves and be able to get people open and be able to shoot when I feel like I’m open or I can make the shot,” she related.

“Kaila was a great three-year kid for us,” Matthews said. “Her first year, we struggled. But each year Kalia was on our team, we got better and Kalia was a great part of that. It wasn’t by accident that every year Kalia improved, we improved as well culminating in a great, a tremendous run the last three or four weeks of this season, ending up in the State tournament, scoring 34 points in our State tournament victory, making all State, making all State Tournament.”

Walker admitted, “I didn’t see that coming really. We were playing, and we weren’t really doing so well. We were down by like 8 when we came into the locker room. And we thought, ‘Okay, we need to do better. We need to come on or we’re going to lose.’ And I came out of that locker room saying, ‘I’m not going to go home the first round.’ I just came out ready to play, ready to make my shots.”

Regarding Steen, Matthews said, “We play in, by far, the toughest girls basketball league in the state, that produces college player after college player. And, since Allison wasn’t with us her junior year, many of the coaches were not familiar with her. But many, many times, (they were asking) ‘Who is she? Who is that kid? Where’d she come from?’”

“Junior year, my attitude was bad, and I got kicked off,” Steen admitted. But she gave it another shot before senior year.

“I tried out,” she recalled. “(Coach Matthews) had talked to me in the office and he was like, ‘How do I know you’ve changed?’ and all that. I was just like, ‘I can show you,’ and I did.”

“The impact she made on our team this year was immeasurable, whether it be the obvious things, rebounding or shot-blocking — all those things people see in the games and the stats,” the coach asserted. “But her personality is contagious. When Allison walks into any room, any room on this campus or any room she goes to, she captures that room like no one I’ve ever coached. She is a special young lady.

“As for her basketball skills, she is one of the most unselfish basketball players to ever play,” he added. “A number of times we would implore her to offensive rebound and score, not offensive rebound and pass it. But that just speaks to her willingness to help the team. She is a special, special kid and we will miss her. Our locker room will never be the same.”

And why is that, Steen was asked.

“Because I am the energy of the locker room,” she declared. “When somebody’s down, I know how to get somebody up. There’s never a dull moment.”

Steen’s older brother, Braylon, is a Hornets alum and is now playing at National Park College in Hot Springs, where he earned all-Region second-team honors as a freshman.

“He actually taught me how to catch, shoot — a lot of stuff,” Allison Steen said.

Her shot-blocking ability which includes tremendous timing and jumping ability, often enabled her to block shots taken by taller players. “I just feel like I can sense when somebody’s going to shoot and, if they don’t shoot, I might foul but I feel like I know what I’m doing,” she explained

And her rebounding? “I went to the gym and I practiced with these little weights on my ankles, so I can feel like I’m jumping higher without them,” Steen said.

And where’d she learn that? “YouTube,” she answered. “I’d watch Michael Jordan tapes and stuff.”

Matthews said, “Kalia’s an excellent young lady who carries herself in a great way. Her future at Arkansas Baptist is a product of all the things that she does to get better, all the stuff she does in individual workouts at Bishop (Park), all the stuff she’s done in AAU, traveling around the state and around the country, all the things she did here with us — all those things put together. Kalia came a tremendous distance in terms of her basketball skills and her basketball maturity and her leadership overall.”

Always a lights-out shooter in practice, Walker often struggled to be consistent from 3-point range during games. But somewhere during the season, that changed, and she became deadly from beyond the arc in games as well.

“I always practice after practice and try to get my shot on point,” she acknowledged. “I was like, ‘Okay, it’s the end of the season. I need to come on. I need to help my team. We need to win.’ Because last year, we didn’t do so well. I didn’t do so well, my scoring. So, I knew that I needed to up my game and do better. So, I was really focused on making my shots and being able to score for my team.

“It was me believing in myself, that I can make more shots,” she explained.

“It was like the best senior year I thought I could have,” Walker asserted. “I didn’t think my senior year was going to go that well, but I surprised myself and I surprised everybody.”

“I feel like I achieved a lot my basketball high school year,” she said. “It was fun, very fun.”

Matthews added of Steen, “Arkansas Baptist is getting a young lady who continues to grow — grow in maturity, grow in basketball, in all ways you want to see 16-, 17-, 18-year old young ladies grow. Allison’s headed in that direction.