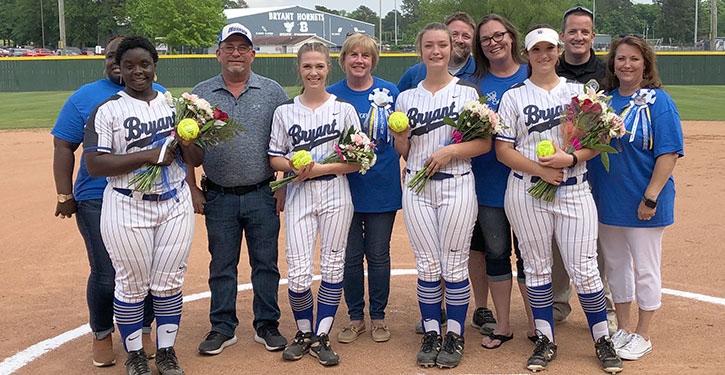 The Bryant Lady Hornets softball team honored seniors Aly Bowers, Meagan Chism, Lexi Helton and Henessae Shavers on Tuesday night against the rival Benton Lady Panthers in a tune-up for the teams’ respective State Tournaments, which begin on Thursday; for Bryant at Bentonville in the 6A and for Benton at home in the 5A.

And, as is the tradition, each senior player invited a favorite teacher from Bryant High School to throw out a ceremonial first pitch. For Shavers, that was Antoinette Mims; for Helton, it was Monica England; for Chism, it was Kathy Stephens; and for Bowers, it was Patricia Graves.

The game itself was reminiscent of the first time the two teams met back on March 8 when Benton trailed 3-2 going into the final inning and rallied to win 4-3. This time, Bryant erased a 4-1 deficit with a four-run fifth only to have Benton regain the upper hand on a two-run homer in the top of the seventh by Tuesday Melton to make it 6-5.

This time, the Lady Hornets had the last at-bat and though Maddie Thompson, Regan Dillon and Alissa Suarez each made a bid at extra-base hits, each drive was caught at Benton held on once again.

“We’ve had trouble finishing with them, but it’s been a good game every time,” said Lady Hornets head coach Lisa Dreher. “And I like the way they fight against (Benton).

The Lady Hornets will take an 18-12 record into State, the fourth seed from the 6A-Central Conference in which they were 8-6. They’ll play on Thursday at 3 p.m., against the fifth-seeded team from the 6A-West, Van Buren.

“The fight that they had this game is something I have been wanting to see,” Dreher added. “I know it’s in them. Hopefully, we can take this up to Bentonville.”

It’s been a season of adversity for a young Lady Hornets team.

“We’ve had to find our identity as a team, making adjustments mid-season,” the coach acknowledged. “It’s been difficult, but I think they’ve grown from it and I think they’re better for it.”

Chism shone in the final home game of her four-year career with the Lady Hornets, going 4 for 4 with two runs scored and an RBI. Bowers was 2 for 4 and was on base three times.

Bryant had 12 hits and Benton 11 as each used three pitchers in the game to get them all prepared for State. Freshman Christine Mefford was the most effective pitcher for the Lady Hornets, throwing 3 2/3 innings of scoreless relief, scattering three singles.

Bryant’s fifth-inning rally started with a single by Haleigh Beck, her second hit of the game. Bella Herring then sliced a double inside the line in right. With one out, Chism came through with an infield hit that drove home Beck to make it 4-2.

Caitlin LaCerra followed with a slap to shortstop. Benton’s Shelby Samples noticed Herring straying from the bag at third and threw there. But Herring got back to the bag and LaCerra sprinted across the bag at first to load the bases for Thompson.

A grounder to second got Herring home to make it 4-3. Chism scored on a wild pitch to tie it then Dillon smacked an RBI single to right to put the Lady Hornets ahead.

Bowers singled up the middle, but Benton wriggled off the hook with a strikeout on a borderline pitch.

In the sixth, Mefford and the Lady Hornets set down the Lady Panthers in order. Bowers snagged a liner to right off the bat of Melinda Wells then Joely Calhoun hauled down a fly to left off the bat of lead-off batter Elana Scott then Arys Hart popped to Suarez at second.

The Lady Hornets threatened to add to their lead in the bottom of the inning. After Beck was robbed of her third hit on a liner that Melton, playing third, stabbed, Calhoun chopped a single up the middle and Chism drilled a lined single to center. The speedy LaCerra nearly beat out an infield grounder to short but Samples fired a throw to first just in time to end the inning.

Moments later, LaCerra robbed Gracie Redmon of a homer, reaching high at the fence for a splendid catch. But a walk followed to Riley Gilmore before, on a 1-1 pitch, Melton belted her homer.

Mefford, who had come out of the game as the Bryant pitcher at the end of the sixth, returned after the homer and surrendered a single to Samples before retiring the next two on a soft liner back to the pitcher by Caitlin Ginther and a strikeout of Aubree Goodnight.

Both teams scored in the first inning. For Benton, Hart singled, took second on a wild pitch and scored on a double by Redmon. For Bryant, Chism doubled, went to third on LaCerra’s single, and scored on Thompson’s sacrifice fly to right.

The Lady Hornets then lost two runners on the bases. First, Dillon hit a grounder to Samples at short. Being aggressive, LaCerra tried to score from third but was thrown out. Moments later, Bowers singled only to have Dillon thrown out from right by Scott when she tried to advance to third.

In the second, Beck singled with one out. Pinch-runner Aryonnah Briggs tried to steal second but was thrown out by Hart, the Benton catcher.

The Lady Hornets remained aggressive on the bases in the third. With one out, Chism singled to center. LaCerra followed with a bunt up the first base line. Ginther fielded the ball and tried to tag LaCerra only to drop the ball. Hoping to sneak into third as Ginther scrambled after the ball, Chism rounded second and headed to third. But Ginther recovered quickly and fired a perfect strike to Redmon at third for the second out of the inning.

Meanwhile, in the top of the third, Benton broke through for three runs. Hart doubled with one out and Redmon singled her home to snap the 1-1 tie. Gilmore was struck by a pitch then Melton singled up the middle to plate a second run. Pinch-runner Hannah Scruggs tried to go to third on the play but was thrown out on a relay from LaCerra to Chism to Thompson at third.

The Lady Hornets struggled to get the third out, however.  Samples singled, Ginther walked then Goodnight singled to right to make it 4-1.

Mefford relieved in the fourth and set down the top of the Lady Panthers’ batting order 1-2-3. She was helped by Thompson at third, who made a leaping catch of Scott’s line drive.

In the top of the fifth, Benton threatened when Gilmore and Samples singled. With one out, Ginther lined one toward the gap in left-center only to have Calhoun sprint over and make a diving catch to rob her of extra bases and the Lady Panthers of more runs. Goodnight flew out to Bowers in right and, in the home half, the Lady Hornets rallied to take the lead.

Class 6A State Tournament brackets, softball
Lady Hornets Steen, Walker moving up but not far away