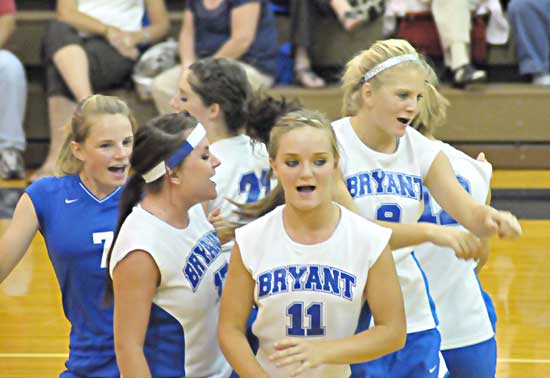 Lady Hornets step it up to earn thrilling sweep of Malvern

The Bryant Lady Hornets got some measure of revenge against the visiting Malvern Lady Leopards a week after Malvern defeated them in a jamboree match at Benton.

The Lady Hornets powered down 23 kills and five aces against the Lady Leopards to win 25-16, 25-15 then came from behind to take a thrilling 25-23 victory in the last game.[more] 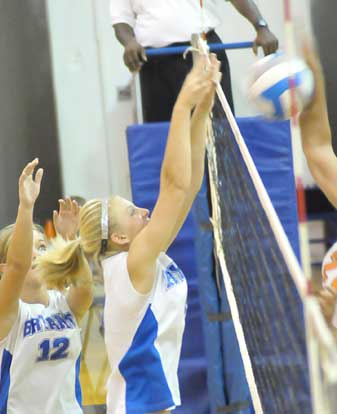 “The big thing was that I told them to work on consistency tonight and they definitely did,” Bryant head coach Beth Solomon said. “There’s no reason they shouldn’t have won in three the other night, but tonight they were ready to go. They wanted some revenge after dropping a game to them last week.”

In the first game, Bryant started off with a 6-1 lead on six Malvern errors, four that came in succession to begin the contest. The Lady Hornets were up 7-3 when Brianna White killed a shot and came back a few minutes later, after the Lady Leopards closed in to 9-5, to get another kill. Malvern got as close as 10-8, but Courtney Davidson tipped the ball over the defense for a point and Maggie Hart slammed a kill shot to break the string.

Hart came back with a block for a point and setter Hannah Rice got a dink over the defense for a 15-9 lead. White managed to gain a point on a long hit that was misplayed by Malvern, then Davidson came back with a tipped point to make the Lady Hornets advantage seven points, 19-12. 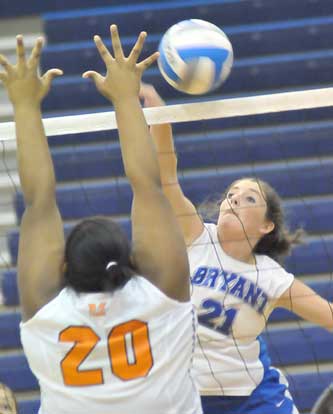 Hart started the second game with a tip for a point then McKenzie Rice followed that with a kill. Hart came back for another kill and a quick 3-0 lead for Bryant. Amber Cope tipped the ball over the defense to make it 4-1 then four Malvern errors made it a 7-3 contest.

Davidson’s stature at the net proved to be uncanny as she blistered the ball to the Malvern side of the court and came back to stand up to the Lady Leopard netters for a block. She proved her worth at serving too by getting Bryant six straight points that included two aces. During the Lady Hornets’ run, Hart picked up another kill, Hannah Rice tipped the ball over for a point and McKenzie Rice blocked the ball back to an unsuspecting Lady Leopard for a point.

Bryant had raced out to a 16-5 advantage. 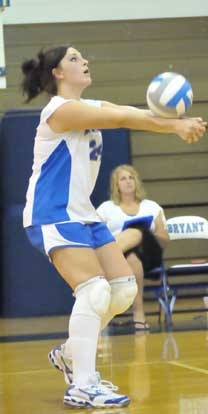 McKenzie Rice put two strong kills together for a 19-8 lead, then got a point off a mishit ball by Malvern. Cope stepped up to do the same on the right side of the net and Davidson came through for another point on amisplay by the Lady Leopards.

White subbed in and immediately contributed on the front row with a dink and Hart got a block for a point. McKenzie Rice ended Malvern in the second game with a spiked kill that was untouched by the Lady Leopards.

After playing two nearly flawless games with defense from libero Lauren Reed and setting by Hannah Rice, the Lady Hornets fell behind in the third game briefly 1-0. McKenzie Rice got Bryant back on track with anothertouchless kill and Cope blocked the ball back at Malvern for a 2-1 lead. Another kill from McKenzie Rice and block from Cope allowed the Lady Hornets to stay on top by one. McKenzie Rice’s block put them up 6-3 early on.

White got a kill and Cope scored on a missed ball by the Lady Leopards then White served for an ace before a Malvern error made the score 12-6 Bryant. The Lady Leopards came storming back to take a 13-12 lead, but White’s kill tied it for a short time. 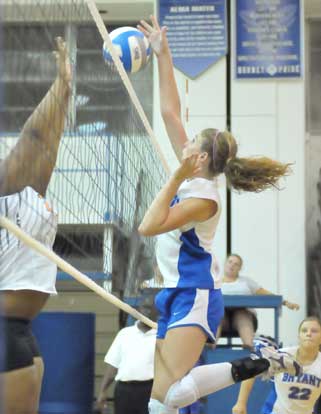 Malvern continued to roll and built a 21-16 lead, but the Lady Hornets swung the momentum back in their favor when Davidson stepped up for a kill shot. Hannah Rice got a tip and two straight Malvern errors pulled Bryant back in the game, 22-20. Davidson had back-to-back kills to make it a one-point deficit, then McKenzie Rice finished off the Lady Leopards with two straight kills. The final point came on a miss-hit by Malvern and the comeback was complete for Bryant.

“I think we will ride this momentum,” Solomon said. “They are getting more consistent and started to merge that tonight in that third game. We hit a lull, but came back. You can’t pick out a single player from this, they all played together as a team. We had the same girls playing the same spots and tonight they were ready to play. Hopefully, we will stay that way.”

“The JV played great,” Solomon said. “They did an amazing job and, for the most part, they all played well.” 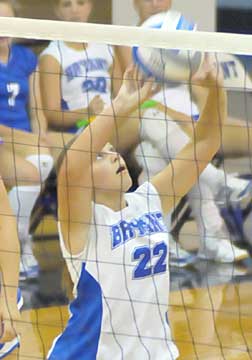 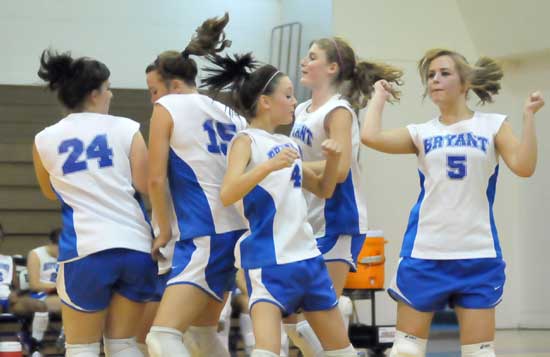