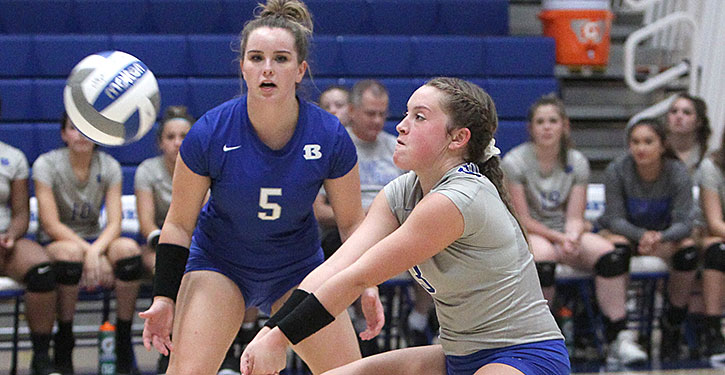 After a pretty good showing in the Little Rock Spikefest on Saturday in which they swept three pool play contests before losing in bracket play to Cabot, the Bryant Lady Hornets returned to 6A-Central Conference play on Tuesday and, in each of the sets of their match with the Mount St. Mary Academy Belles, there were times when it looked like they may have the visitors on the run.

But the key to winning in volleyball is to maximize your own stretches of good play and minimize the steaks of your opponent. But too many of the Lady Hornets’ surges were cut short, often by unforeseen errors, and too often they just couldn’t cut off the Belles’ bursts.

The frustrating thing for the Lady Hornets is knowing — and feeling and seeing, actually — how well they can play while struggling to maintain it.

“A moment of panic,” said Bryant head coach Leigh Ann Back, of the often unforced errors. “I think we kind of get a little frantic at times and, instead of staying calm and realizing what we’ve been training to do, we have a tendency to panic and just throw up whatever it is we can throw up to hopefully get it over the net.

“The good fundamentals that we work on every day in practice,” she emphasized.

From the start, Back, who took over as head coach late in the 2018-19 season, acknowledged that it would be a process this season for a team with some experience but with little playing in her system.

“It’s a struggle and then it goes back to the whole thing of there’s not enough fight,” she commented. “I think it’s almost like a prevent defense in football. We are trying not to lose instead of playing the way we can.”

The Lady Hornets had leads in all three sets. In the first, Ella Reynolds shone early with three of her five kills in the game. The first two, around an ace by Alyssa Hernandez had Bryant up 7-3. Later, after Mount cut the lead to 8-7, she broke serve with a dink then fired an ace.

The Belles eventually tied it 11-11 and went on a run to build a lead of 21-13 before Cassie Land broke serve with a kill. With Jaiyah Jackson in service for the Lady Hornets, they made a push Sammie Jo Ferguson had two kills and Reynolds had her fourth combined with a couple of hitting errors by the Belles. And the Lady Hornets were within 21-22.

But a hitting error cost Bryant control and the Belles’ Riley Ray served up an ace to put Mount at set point. Sam Still’s kill gave the Lady Hornets’ hope, but a serving error ended the game.

In the second set, the Lady Hornets roared to a 6-0 start capped by a kill from Truli Bates.

A kill by Mounts’ Maddie Walters broke the goose egg on the board but the Lady Hornets did a good job of maintaining the lead for a while. Bates had another pair of kills and so did Ferguson. And when the Belles closed to within 11-9, Bates had another kill after a splendid dig by Jackson. Erin Thompson served up an ace but a serving error just a moment later, cost the Lady Hornets’ control.

Mounts’ Annison Yates served up an ace but the Lady Hornets stemmed the Belles’ surge when Bates had another kill and Shaylee Carver stroked an ace to make it 18-11.

Again, however, a serving error cost Bryant and, this time, the Belles surged. They cut the margin to 18-15 before a Bryant timeout. Land had a kill but another serving error haunted the Lady Hornets. With kills by Catalina Williams and Shelley Jackson, the Belles pushed into the lead.

A pair of aces from Walters, coupled with a hitting error and a net violation by the Lady Hornets resulted in a disheartening loss for Bryant.

“All three of them hurt simply for the fact that we’re not finishing,” Back noted. “We might get a lead then we just kind of stop.”

The Lady Hornets competed in the third set, which was close start to finish. The Belles built a 10-6 lead only to have Bryant rally to go up 12-11. That surge was highlighted by Thompson’s ace and kills by Madelyn Hoskins, Bates and Reynolds.

Walters finally broke serve for the Belles but the match stayed close, tied at 13 and 16. Another net violation allowed the Belles to gain an edge. Ferguson scored on a dink then Bates had a kill to keep it a one-point game, 20-21.

But the Belles scored the last four points on kills by Ray, Katie Kaelin and Williams to close out the match.

Ferguson led with six kills. Bates had five as did Reynolds. Bryant had nine aces including three by Carver and Thompson’s two. Thompson also had a team-high 10 digs, Stills nine, Reynolds eight and Cora Edwards seven.

The Lady Hornets’ next match is Thursday at Little Rock Central.