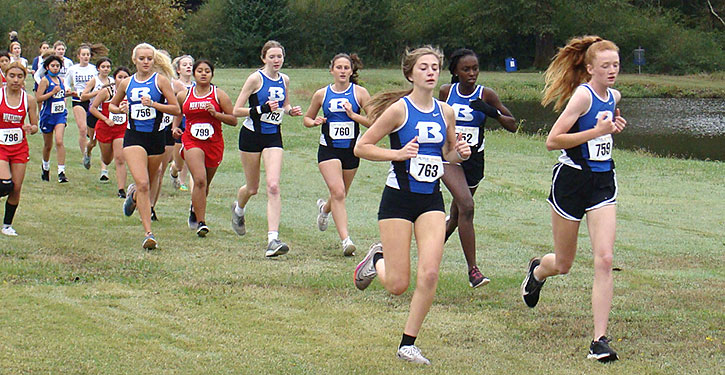 McKenzie Hicks and Aryn Stiles each earned all-conference honors as they led the Bryant Lady Hornets to a third-place finish at the 2020 6A-Central Conference cross country meet at Bishop Park on Tuesday.

Hicks, a junior finished third overall with a time of 21:18.65. Stiles, a senior, was eighth in 21:36.15 as the Lady Hornets finished with 68 points. Conway captured the league title by placing all five scoring runners in the top seven including Meg Swindle who was individual medalist with a time of 20:33.64 and runner-up Lillian King who ran a 21:04.42. Both are freshmen, as is Anna Kate Simco, who was right behind Hicks for fourth in a time of 21:25.38.

Cabot was second with 62 points, just edging out the Lady Hornets. The Lady Panthers had just one runner in the top 10 but bunched together with all five scoring runners finishing between 10th and 16th.

“I think we did pretty good,” said Lady Hornets coach Keith Dale. “You know, I have a couple of girls that, whenever the conditions are wet and soft, it’s like they just can’t run as well as they are capable of. I think a lot of that just has to do with little aches and pains that haven’t totally healed up and those kind of things.

“But Hicks and Stiles had a really, really good day,” he added. “That’s both of their p.r.’s (personal records).”

After the top three teams, Fort Smith Northside was a distant fourth with 130 points.

Bryant will run in the Class 6A State meet at Oaklawn Park in Hot Springs on Friday, Nov. 6.