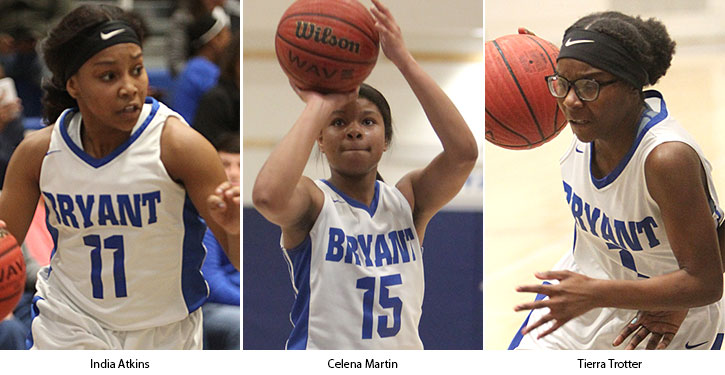 On an almost all sophomore team, three sophomores for the Bryant Lady Hornets basketball team have earned post-season honors.

Point guard Tierra Trotter who averaged 10.4 points and 3.2 assists per game including a season-high 30 points in a win over Mount St. Mary Academy, was named all-State in Class 7A.

Celena Martin who, as a 5’6” forward, averaged over eight rebounds per game along with 7.4 points per outing, was named all-State Tournament.

And, in addition to Trotter and Martin, guard India Atkins was named all-conference in the 7A-Central. “India is a tremendous on-ball defender,” said Lady Hornets head coach Brad Matthews.

In the 2017-18 season, the young Bryant team finished 11-16 overall and 6-8 in conference play, earning a bid to the Class 7A State Tournament where they were ousted by a veteran Van Buren team.