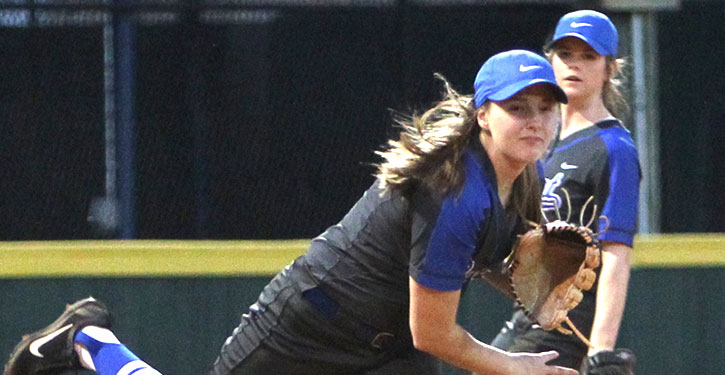 PEARCY — The Bryant Lady Hornets hammered out 11 hits including two each from Regan Ryan, Gianni Hulett and Meagan Chism to back the pitching of Raven Loveless in a 6-1 win over the Lake Hamilton Lady Wolves on Monday night.

Loveless scattered six hits, walked one and struck out three in seven innings in the circle. The lone Lake Hamilton run came on a solo homer by Hailee Quilici in the bottom of the fourth.

Bryant bounced back after suffering its first loss of the season, 2-1, in a six-inning tournament game against Benton Harmony Grove on Friday. The Lady Hornets are now 5-1 heading into tonight’s 7A-Central Conference opener at home against Fort Smith Northside.

By the time Quilici hit her homer, Bryant had built a 5-0 lead. Maddie Stephens ignited a two-run third with a double to left with one down. An error allowed her to take third.

Ryan got a bunt down but Stephens was unable to score. But Ryan beat it out for a hit. After she stole second, Hulett ripped a line-drive double to center to plate both runs.

In the fourth, Chism’s one-out double to center started a three-run uprising. Brooklyn Trammell yanked a single through the left side to drive her home.

With Avari Allen on to pinch-run for Trammell, Loveless popped a double into left to put runners at second and third for Stephens who picked up an RBI with a grounder to second.

With Loveless at third, Ryan got another bunt down that, this time, got the run home as well as resulting in a base hit.

Meanwhile, Loveless had allowed just two base hits and faced the minimum through four frames. She pitched around a lead-off double by Madison Hardcastle in the bottom of the first. Jessye Rowland lined to Hulett in center and Hardcastle tagged up and tried to score only to be thrown out at the plate on Hulett’s peg to Chism.

In the second, Rowland singled and, after advancing on a groundout to Trammell at first, got picked off second with Sarah Evans applying the tag.

Loveless fanned two in the third as the Lady Wolves were retired in order. The first two in the fourth were set down before Quilici tied into a 1-0 pitch for her homer. But Loveless got the next batter Annalee Diehl to bounce out to Trammell at first to end the inning.

Bryant got that run back in the top of the fifth as Diehl took over for Rowland in the circle. Evans drew a walk then Gabbie Bonvillain drilled a liner that burned the Hardcastle in center for an RBI double.

The final score was on the board but Lake Hamilton threatened in the bottom of the fifth when Rowland singled and, with two down, Sydney Campbell walked. But Natalie Rogers popped out to Ryan in right to end the inning.

The Lady Hornets made a bid to add on in the top of the sixth. Stephens led off with a walk and stole second. With two down, Aly Bowers lined a single to right. When Stephens tried to score, however, Campbell fired home in time to end the inning.

Hardcastle single to open the home sixth but was caught trying to steal. That proved fateful when Rowland drilled a double on the very next pitch. She got to third when Quilici grounded out to Evans at second but was stranded when Diehl popped out to Bowers at short.

Loveless finished it by setting down the Lady Wolves 1-2-3 in the bottom of the seventh.